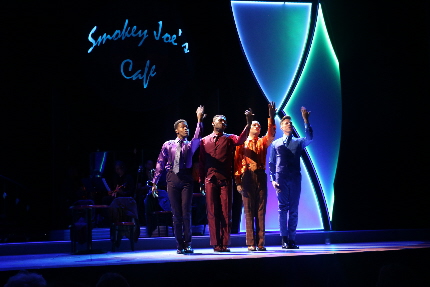 There’s a party going on at the Riverside Theatre where the jukebox is smokin’!

The nostalgic revue Smokey Joe’s Cafe celebrates the music of lyricist Jerry Leiber and composer Mike Stoller, whose tunes influenced American music with their crossover style in the 1950’s and 1960’s, by successfully introducing rhythm and blues to traditional pop music audiences. The original Broadway production was conceived by Stephen Helper, Jack Viertel, and Otis Sallid and opened on Broadway in 1995, closing after a record 2,036 performances.

Director-choreographer DJ Salisbury’s fresh, fast-paced, and creative staging keeps the audience engaged and connected to each of the 40 musical numbers performed without narration at the Riverside Theatre in Vero Beach. Salisbury wisely divides these treasured hits into two acts…Baby Boomers need to catch their breath!

The cast of five men (Schyler Conaway, Ian Coulter-Buford, Andre Jordan, Gabriel Mudd and Jamari Johnson Williams) and four women (Alison Cusano, Summerisa Bell Stevens, Jayne Trinette and Khalifa White) is simply exceptional. They each can deliver a blockbuster solo, sing flawless harmonies, dance with precision and ease, and within their performances, become the characters and astutely enact their stories.

Salisbury delivers a new and inventive look to the revue’s set design. Working with his accomplished scenic designer, James Dardenne, Salisbury’s set  represents pieces of a giant deconstructed jukebox. He also collaborated with lighting designer Yael Lubetzky to include the pink, orange, purple and green neon lights found in the jukeboxes of the 50’s and 60’s. A picture of the jukebox that was the model for this innovative set is on the cover of the production’s program. The diamond and triangular glass pieces on the jukebox front are the models for the large geometric pieces that move after each number into a new formation.

Two other interesting set design notes: The staircase represents the needle in the deconstructed jukebox, and the movable circular structure that holds the musicians represents the turntable.

Salisbury and Dardenne pay homage to the original and most commonly used set design in most productions of this revue, by installing Smokey Joe’s Café on stage to begin Act 2. The deconstructed jukebox returns to finish the performance.

The revue’s songs bring back memories of life in the 50’s and 60’s, as the opening number, “Neighborhood” implies. A favorite moment was at the start of Act 2  when the men went into the audience with mics to have people sing “Yakety Yak” and “Charlie Brown” along with the cast.

Some performances stood out. Alison Cusano is a powerful soulful singer. Her performance of “Pearl’s a Singer” was particularly touching. Khalifa White oozed sexuality singing “Some Cats Know.” When White teamed with Jamari Johnson Williams to sing “You’re the Boss,” you could feel the sizzle. I don’t think anyone in the audience has forgotten Summerisa Bell Stevens and her two minute, vigorous shimmy in the number “Teach Me How to Shimmy.” Ian Coulter and Summerisa Bell Stevens are a beautiful couple in “Spanish Harlem.” Coulter’s vocals and their elegant dance together was a special moment in the revue. Jayne Trinette showed everyone that a woman was always meant to sing “Hound Dog.”

Salisbury loves to have a few surprises in his productions, and this revue is no exception. All I will say is the word, “Magic!” Also, keep an eye out for some surprises when White sings “Don Juan,” and the men go “Shoppin’ For Clothes!”

Praise is due to rockin’ music director Ann Shuttlesworth and her fabulous musicians Brandon Sturiale, Lee Appleman, Thomas Brinkley, Jason May, and Manny Moreira. So glad you get your moment downstage in Act 1!

Costume and wig designer Kurt Alger and his staff took us back in time with their creations. Sound designer Craig Beyrooti blended those terrific voices and musical instruments. And kudos to stage manager Mark Johnson and assistant stage manager Kyle Atkins for keeping 40 different musical numbers on stage with everything they needed at the right moment!

Smokey Joe’s Cafe is a Baby Boomer bonanza of hits that, for many of us, brings back memories of special moments in our lives.