Rock (Of Ages) Redux At The Arsht Kicks, Well, You Know 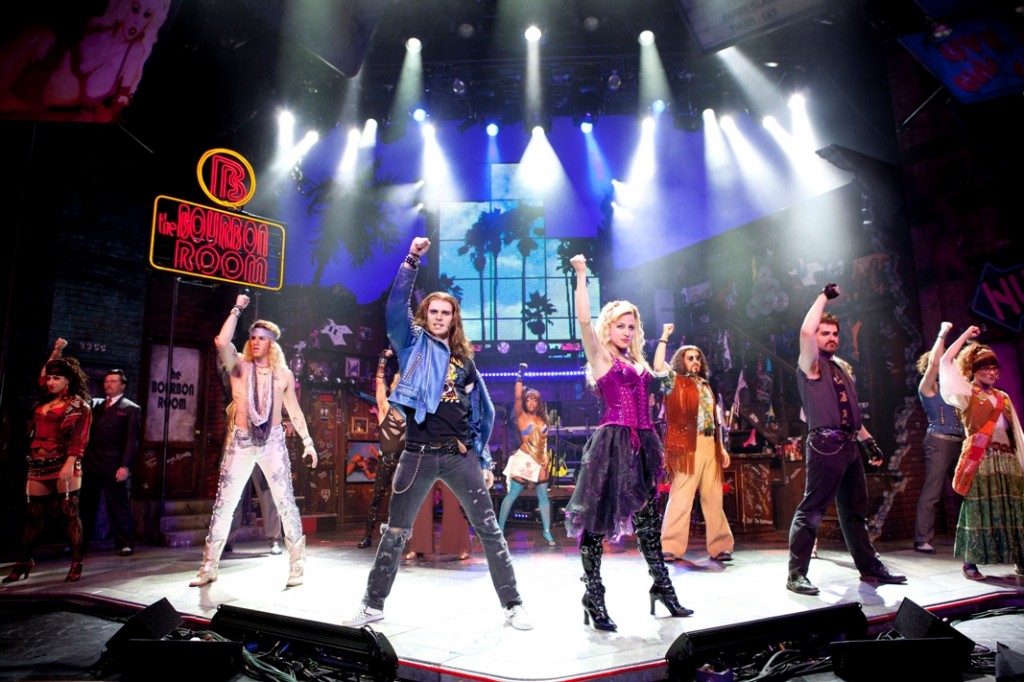 Rockin’ the house with the national tour of Rock of Ages; Miamian Dom Scott center in bluejean jacket Photo by Scott Suchman

If Florida Power & Light is looking for an auxiliary source of energy to forestall  another rate request , perhaps they simply ought to follow around the national tour of Rock of Ages and plug a cord into the stage.

That cheerfully raunchy, surprisingly crafted and supremely silly bit of hard metal fluff has slowed down just long enough for a half-week stay at the Adrienne Arsht Center.

This non-Equity cast has all the enthusiasm and precision to deliver a show that, for all its anarchic spirit, is clearly calibrated down to each leer and pelvis pop. This is especially impressive since some of the cast members have spent a year with the show that both celebrates and lampoons the rock music scene of the mid to late 1980s.

Notable in this cast – completely different from the folks who appeared at the Broward Center in 2010 — is the hero Drew, played with gusto and unalloyed joy by Dominique “Dom” Scott, a Miami native and 2006 graduate of the New World School of the Arts.

But for all the energy, the copious humor and the face-melting guitar licks, this iteration is lacking that indefinable theatrical electricity that infused the version that came through Broward.

The real problem with the show is the sound balance. You had better remember the lyrics to these standards because half of them are lost in the wall of sound emanating from the stage. And plot-centric dialogue, even screamed dialogue, issuing forth during a musical number is completely unintelligible. If the story was not so simple, first-timers would struggle to understand what’s happening besides boy meets girl, boy loses girl, boy gets girl.

That means audiences not familiar with the songs – or who never really heard the words when they were younger – will miss the inventive ways that bookwriter Chris D’Arienzo and the other creators have neatly slipped in the 28 glam/metal jukebox catalog by Whitesnake, REO Speedwagon, Pat Benatar, Bon Jovi, et al.

Briefly, the show is set in the Bourbon Room, the premiere club on the Sunset Strip in 1987 where narrator and sound board expert Lonny (Justin Colombo) introduces us to the denizens including young songwriter Drew (played by Scott) who has dreams of rock mega-success but is currently taking out the trash.  He meets the fresh-off-the-bus actress wannabe from Kansas, Sherrie (Shannon Mullen) whose name clearly was chosen by D’Arienzo solely so he could use Journey’s song “Sherrie.” Through two hours, Drew and Sherrie find faux fame, disenchantment and, of course, true love after some chastening experiences including run-ins with a delightfully dissolute headliner Stacee Jaxx (Universo Pereira).

Scott has an endearing quality with a boyish charisma emanating from his gleaming eyes and Pepsodent smile. Although trained in Florida as a musical theater actor, he’s honed a rock  ’n’ roll voice with his personal band Domin8trx, including the ability hold powerful notes a long, long time, all the while smiling because he knows that he’s showing off as the role requires.

The problem with him is not his fault. He’s 24 years old, which is the right age for the character. American Idol’s Constantine Maroulis, who originated the role on Broadway and played it at the Broward Center, hadn’t seen 24 in a decade. But that worked in Maroulis’ favor because there was always a sly wink in his performance that was appropriate and crucial to a show that you are never supposed to take seriously.

Scott and Mullen hold nothing back from the audience. They are as believable as intentionally cartoon characters can be and they generate individual sexual heat, but they have very little chemistry together.

The five-piece stage band is expertly led by keyboardist Bryan McAdams but the spotlight falls on the blistering licks of lead guitarist Chris Cicchino.

Overall the show has an unexpected polish, especially in the dance ensemble’s crisp gyrations and the whip-smart banter between Lonny and Bourbon owner Dennis played by Zappa-lookalike Matt Ban. But there is a sense, not of staleness, but a whiff of machine oil. There’s no illusion that this is the first time these characters have said or done what you’re seeing.

But all of this is swept away by the blissful and gleeful wallow in nostalgia for a sex-drenched era characterized by the iconic stance of a lead guitarist standing on the lip of a stage, legs spread as far apart a possible, strumming a chord with one hand and giving the world the middle finger with the other.

One caveat: Advertising warns that parental guidance should be exercised in bringing teens, especially anyone under 13. They aren’t kidding. I brought along a veteran theatergoer, my godson, Daniel (“I’ll be 14 next month”), and quickly realized that I had forgotten how bawdy and blue the show is, albeit delivered with an almost innocent good-natured grin. Not being a parent and having no experience with this, I squirmed at every R-rated joke and X-rated implication, and spent a good bit of the show watching him out of the corner of my eye. He had seen and heard much worse at school, I know, and I saw no signs afterward of permanent scarring. But good grief, I’ve become my father.