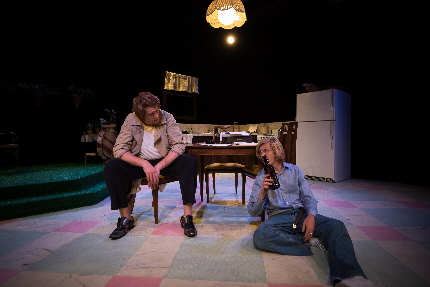 In the fable of The Old West, the one that may or may not have actually existed, a Man makes his way through the beautiful barren crucible and by being tested finds out Who He Is.

While much of externals may be a fantasy, Sam Shepard’s True West suggests that the central paradigm holds true with a pitiless vengeance. Something perhaps imbued in the rocks and the desert — even when it has been covered by suburbia – strips away the artificial veneer of civilization and a Man indeed does find out Who He Is, for better or worse.

That’s only one of the thematic strings vibrating through New City Players’ fine production. Two brothers, as disparate as can be imagined, jockey and joust until their exteriors are stripped away to reveal identical cores that echo a feral frightened nature akin to the coyotes yapping outside.

This 1980 play, sealed Shepard’s fame with mainstream audiences after the success of Buried Child, with its increasingly absurdist depiction of a long-simmering sibling relationship that boils over and then spirals downward into an irreconcilable standoff.

Set in 1980, struggling Hollywood screenwriter Austin (Andrew Mark Davis) is attacking a manual typewriter in hopes of completing a script. He has left his family in Los Angeles to borrow the family home on the edge of rural California while his mother is on vacation in Alaska.

Austin initially chooses retreat rather than confrontation as Lee needles him, repeatedly musses his coiffed hair, mocks his college education and suggests reconnecting with their alcoholic father in the desert. Lee says he has an idea for a movie and persuades Austin to type out an outline. Austin obviously this will get Lee to return to the desert and stop stealing televisions from his neighbors.

But Austin’s visit from his producer Saul (John Holley) leads to Lee backing Saul into a golf game. A bet during the game ends with Saul dropping Austin’s love story screenplay-in-progress in favor of Lee’s modern western. (Lee cites Lonely Are The Brave, a true masterpiece of the genre that theatergoers should seek out.)

From there, Lee becomes insanely obsessed with writing a screenplay. He desperately needs Austin’s help because Lee can barely type and, as Austin jibes, Lee can’t spell let alone write. The demoralized Austin wants nothing to do with it and gets roaring drunk, erasing his inhibitions and vowing to outdo his brother’s anti-social behavior. Lee proceeds to fumble with typewriter ribbon, eventually ripping it out and later smashing it with a golf club.

The ensuing brawl culminates with one brother trying to strangle the other with a telephone cord. Suddenly, Mom (Lory Reyes) comes home to find her immaculate kitchen looking like a war zone littered with crushed beer cans and every bit of kitchenware strewn across the linoleum.

Her unconcerned reaction underscores that the entire play is meant to be surreal. You do not and aren’t supposed to ask where dim-bulb Lee learned to play a hustler-level game of golf.

The descent is beautifully paced and fluidly staged by Gundlach. After scene changes in the dark, Gundlach slides the audience back into the story by having something audible happen in the darkness before the lights return – the slurping of a drink or the sound of a golf club smashing a typewriter into bits.

But she also has two solid actors to work with. Andrew has the less flashy role but he communicates the change in Austin’s behavior with complete credibility as the “civilized man” unraveling into a baser form of human being.

It’s Timothy who has the meaty bravura role of a modern Neanderthal. His brooding eyes and slack mouth grin illustrate someone who not only sees no need to limit his thoughts and actions but who clearly knows it intimidates others — and enjoys that power. His human tornado tearing the kitchen apart, wrenching cookware out of a cupboard, spraying utensils everywhere is akin to watching an elemental force being unleashed. A con artist who has talked himself in to believing his own bull, Timothy’s Lee sports a wry countenance of knowing something secret about real life.

Despite the chittering coyotes, chirping crickets and all that talk of the desert, the production lacks that sense of the American West that Shepard saturated in his works, that lonesome searching feeling that he exuded walking across movie screens. This edition could have been set anywhere.

What Gundlach and her creative team nail so well is setting this solidly in the period from the character-revealing costumes including Lee’s lace-less black and silver shoes (no one is credited but they deserve  kudos) to props like Mom’s American Tourister luggage to the brother’s haircuts, Austin’s flowing blow-dry locks and Lee’s Medusa mop mullet.

True West runs through August 27 from New City Players at The Vanguard Sanctuary for the Arts, 1501 S. Andrews Ave., Fort Lauderdale, on the west side of the street across from Broward Health Center. Performances 8 p.m. Thursday-Saturday, 2 p.m. Sunday. Runs 1 hours 45 minutes with one intermission. Tickets are $35 adults, $30 seniors and $20 students. Visit  newcityplayers.org.