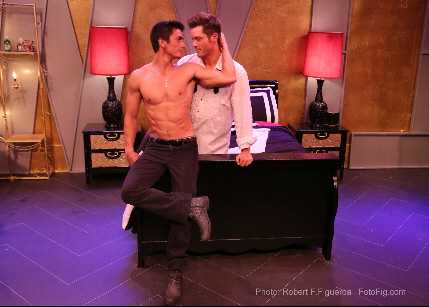 Can a meaningful relationship blossom in a world where cynicism and self-interest seem to trump integrity and burgeoning affection? Island City Stage’s production of Douglas Carter Beane’s hilarious and touching The Little Dog Laughed explores the conundrum set amid the pragmatism of 21st Century seekers of fortune and fame in the shallows of a celebrity-centric culture.

The solid cast under Michael Leeds’ direction mines both the copious Dorothy Parker-style wit satirizing the morally bankrupt as well as the pathos of those same stunted souls struggling to find some kind of emotional fulfillment.

Island City Stage may be committed to LGBTQ elements in all its programming, but it has emerged as one of the troupes most likely to produce a satisfying evening of theater regardless of mission.

The show opens with our narrator, the lovely talent agent Diane (Mia Matthews) who guides us through the toxic jungle of Celebrity Land. Armed with a rapier wit and an even sharper intelligence, Diane has shepherded the budding career of hunky film actor Mitchell who won a major acting award the night before.

We meet a drunken Mitchell (Chris Crawford) in a trendy New York City hotel room during an aborted encounter with a younger male hustler Alex (Michael Uribe) he hired over the phone. Mitchell is a self-effacing fellow too hesitant to actually have sex with Alex. That’s OK with Alex who says he only sleeps with men for money, that he has a girlfriend and denies he is actually homosexual.

Diane wants to win the consent of a New York playwright to film a cinematic incarnation of his off-Broadway hit about two gay men. Meanwhile Mitchell hooks up repeatedly off-the-clock with Alex, who also seems like a pretty pleasant guy. Both are increasingly intrigued with each other, groping emotionally as they try to dope out feelings that clearly more than, but not exclusive of, sexual.

This complicates Alex’s relationship with girlfriend Ellen (Ashley Chang), who finds neither the club scene nor the “just friends with benefits” relationship with Alex fulfilling. All three young people, having bought into the idea that true relationships are a myth, are lonely and adrift with no moorings.

In the play and this production’s centerpiece, Diane and Mitchell sit at a restaurant table inches away from the audience, trying to seduce the unseen unworldly playwright to allow his precious play about two gay men to be turned into a, gasp, commercial film with Mitchell in the lead.

Mitchell/Crawford and Diane/Matthews lie, coerce, wheedle and flatter in near perfect sync; it’s like watching the more expert half of a tennis doubles match in overdrive. With every half-truth, they speak arsenic-laced asides to the audience belie their promises. Negotiations are everything in life. What Mitchell doesn’t realize is that he, too, can be the victim and that, to Diane, relationships are also negotiable with lasting love not necessarily the required end product. Caveat emptor, buddy.

Beane – who went on to waste his talent on unworthy musical hoots like Xanadu and Sister Act – deftly starts out skewering the corrupt with lip-smacking verve, but surreptitiously builds an emotional arc that emerges in the second act as an object lesson in the cost of jettisoning your soul. Our sympathies change by the finale with a penultimate scene that is unexpected but perfectly plausible.

What most people will remember are his epigrams worthy of Oscar Wilde like: “Give final cut to a writer? I’d rather give a firearm to small children” or when the playwright asks for her word, Diane says, “My word? You’re asking a whore to give up her cherry.”

This is sardonic catnip for Matthews. She is one of those actresses with a supporting part here, a lead in a small production there, who somehow you just knew would meet the challenge if someone would give her the right meaty role. Sure enough, she proves here by thoroughly investing herself in the creation of this glorious epitome of delicious venality.

Her Diane seems less heartless than the original Broadway interpretation by Julie White. But that makes this Diane someone who simply realized decades ago that compassion is a luxury that cripples the pursuit of what she believes makes the world run and what makes life worth living. By now, Matthews’ Diane knows that any sentimental resistance is like railing against the sun rising in the east. Regal and lovely, this Diane exudes supreme confidence that she knows people and how the world works. She’s not a monster, but someone who accepted pragmatism as the only verity.

Crawford just won a Best Supporting Actor Carbonell for his role as the impassioned lover in Actors’ Playhouse’s Murder Ballad, adding to a local resume that included admirable work as Lee Harvey Oswald in Zoetic Stage’s Assassins and King Phillip in Palm Beach Dramaworks’ The Lion In Winter.

Among his accomplishments here is persuasively portraying a “nice guy” who has yet to let the pursuit of celebrity to completely skew his decency. In the first act, Crawford projects the encroaching weariness of the pursuit and especially his uncertainty as he haltingly explores a real relationship outside of sexuality. In the second act, Crawford’s anguish over having to make a choice is palpable.

Uribe makes his professional stage debut with a seamless creation of a complex human being. Much of the time, Uribe is completely believable as a young man who is as surprised as anyone that he is developing genuine feelings for Mitchell.

Chang is not quite as polished as the rest, but she is credible as a young woman beginning to yearn for something more than the shallow life surrounding her. She, as with Uribe, grows deeper into her part as the evening progresses.

Again, it’s hard to find Leeds’ fingerprints, but the proof is in the always reliable results of his leadership: engaging storytelling that never has people checking their watch, perfectly paced performances that delve deep into psyches, and lots of bits of business subtle and otherwise that enhance the script.

Island City Stage has been based much of its short life at the tiny Empire Stage and will be moving next season to a new space in Wilton Manors being operated by the Infinite Abyss troupe.

But this play works amazing well in the tiny space, ramping up the audience’s ability to see the emotional byplay with an almost cinematic intimacy. For instance, at times Diane has to look askance with amusement at her client’s declaration of wanting a real life. In a larger venue, she would roll an eye or pointedly arch an eyebrow. But Mathews and Leeds have her accomplish it with something indescribably subtle as a facial flicker.

This 2006 script is happily a shade outdated in 2015. Much of the plot turns on the prospect that the soaring trajectory of an actor’s career might be shot down if his homosexuality was exposed. The current list of openly gay actors seems to undercut this device.

Otherwise, The Little Dog Laughed is a rollicking and eventually insightful expose of the human condition in what sociologists will someday classify as The Kardashian Era.