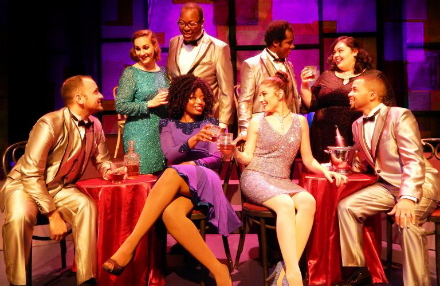 Smokey Joe’s Café, the quintessential plotless rock n’ roll jukebox revue, is as dependable as light entertainment gets in the hands of experienced directors like Kevin Black at Broward Stage Door.

It’s rarely electrifying, but this 1995 compilation of nearly 40 crossover songs of Jerry Leiber and Mike Stoller circa 1950-1962 is a guaranteed soul-warming journey in nostalgia.

Black’s octet of singers/dancers wend their way through the rose-colored halls of pop music from “Poison Ivy” to “Love Potion # 9,” from “Spanish Harlem” to “Jailhouse Rock.” Some are deathless standards, a few are rarities, but most speak to then-ignored teenagers navigating the rapids of puberty through young adulthood: the glory of finding love, the rigors of pursuing love, the celebratory silliness of love and the profound pain of lost love.

Black, who has directed, choreographed and written a score of these including this  show twice before, has a knack for finding and developing young talent with strong voices and an ability to relate to reach other on stage rather than simply stand and deliver to the audience. Black insists they try to put across a story or at least a relationship with each song.

Each of the cast members, who hadn’t been born when these songs had already achieved oldies status, are reasonably energetic and enthusiastic even at a Wednesday matinee when their audience was filling in memories stimulated by a fondly recalled chord change.

But the standout, as if a spotlight was her birthright, was Kat Gold, who nearly stole Stage Door’s Nine this year as the exuberant lusty prostitute, and who just received a Silver Palm Award for her recent work.

Gold has honed her natural clarion voice into an expressive instrument that rips the marrow out of song whether it requires a brassy belt or cool caress. It can range from the roof-raising revival “Saved” to heart-wrenching “Fools Fall In Love.” She’s comfortable enough with her physicality to play on her fleshy frame as the unlikely object of lusty teenagers in “Dance With Me.”

But she has plenty of company crooning and carousing to digital tracks; the entire cast provides butterscotch smooth harmonies and background support as each performer gets a solo number.

Musical Director Michael Friedman blends the voices beautifully, although there were some missed notes the afternoon we attended. Black’s choreography provides some nice interludes such as a pas de deux to “Spanish Harlem.”

Ironically, the writers were a couple of white Jewish boys from Long Island and Baltimore who took the foundation of black R&B “race music,” clothed it in the vernacular of middle American teenagers, surrounded it with complex arrangements and penned crossover hits for primarily African-Americans groups like The Coasters and The Drifters – and yes, Elvis, although they wrote his signature “Hound Dog” for Big Mama Thornton. Much of it had the depth of an Annette Funicello beach movie, but there were some surprisingly trenchant singles especially heartfelt ballads like “Stand By Me.” which closed the revue with a warm embrace.