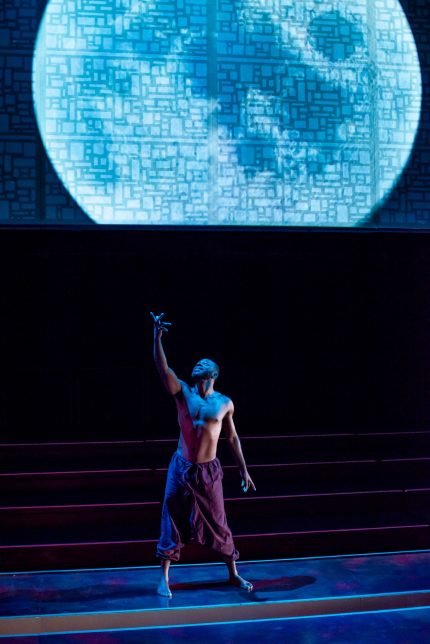 The rhythms of African folk music subside into a profound silence broken only by soft sounds of birds and other animals in the distance. A tall dark erect figure clad only in breeches steps magisterially onto a runway lit mostly in silhouette. He leans forward in a modified crouch and lifts one long limb into mid-stride.

This is a 48-year-old massive elephant with legendarily huge tusks commanding the Kenyan savannah, watching carefully for danger. He intones his thoughts in a measured monologue until first we hear thunder and then realize with his collapse that it is the gunshots of poachers.

And thus begins Zoetic Stage’s unique Mlima’s Tale, a theatrically-lush indictment of illegal ivory trafficking and shared responsibility for the slaughter of animals, not so much for the artistic trinkets that result, but for human greed.

Imagine a fact-filled Discovery Channel documentary about the horrendous practice, but dramatically told in a narrative by a skilled playwright in what is produced on stage as a fever dream awash in lights, sound, music and movement.

Zoetic Stage melds a half-dozen elements to turn what could have been – and sometimes slips into — a didactic issues play but cloaked in a daring piece of theater.

The script by the acclaimed Lynn Nottage (whose style and focus seems to morph with every new piece from Intimate Apparel to MJ the Musical) charts the death of “the great tusker,” and the step-by-step journey in which his huge lucrative tusks travel scene-by-scene across the world from Kenya to China.

Throughout, Mlima’s ghost or spirit silently accompanies the tusks and spreads a bit of white substance looking like tribal face paint on each person in the chain conveying the tusks, the stain of complicit guilt like a mark of Cain.

This may sound on paper hokey, overblown or too precious, but the vision and approach of director Stuart Meltzer and his A-list creative team makes this an inescapably thought-provoking evening. It is, indeed, a courageous approach because the highly-stylized physicality throughout could not have been half as convincing in a cold rehearsal hall minus the extremely effective array of environment-setting lights, set pieces, soundscape, costumes and music. But it pays off when all the elements come together in performance.

And, yes, there are times that Nottage has emptied her notebook of research by having characters cite facts and figures, but the actors almost pull them off by expressing them with passionate anger or frustration or fear.

So we start with a couple of Somali poachers who chop off the tusks before Mlima is dead, move through a corrupt chief of police charged with stopping the slaughter but actually profiting from it, through an overloaded park warden, through a smuggler, then a talented ivory sculptor in Vietnam turning the tusks into “artworks,” and then a jaded wealthy buyer in China.

One superb moment is when the buyer is surveying an array of ivory pieces in a gallery. As she passes each piece, the quiet voice of each individual dead elephant is heard enunciating their name and underscoring that each trinket was once a living breathing creature.

But, of course, the ultimate praise goes to actor-dancer Jerel Brown for his inhabiting of Mlima. As Zoetic did with its Frankenstein last season, Brown’s physicality is mesmerizing, molded in part by the movement direction of Herman Payne. Brown just won a Silver Palm Award this week recognizing his work as the choreographer of Slow Burn Theatre Company’s Once On This Island.

The vision for the entire production was the work of Meltzer, whose skill set encompasses drama, comedy and musicals. But this is different entirely stylistically and he has melded some of the A-list evocative work of Michael McKeever’s double-runway set design with surfaces that echo elephant h

All of this complex interlacing work is overseen each night by Resident Stage Manager Vanessa McCloskey and assistant Samantha Metzelar.

The trip is only about 90 minutes long, although it seems to run longer, and it’s not a “show” you go to for enjoyment, but it’s one you can’t help but respect and appreciate.

(A side note: Thank you to Zoetic for reinstituting printed programs.)