Sex In Primal Forces’ ‘The Good Girl:’ Is It Real Or Replicant? 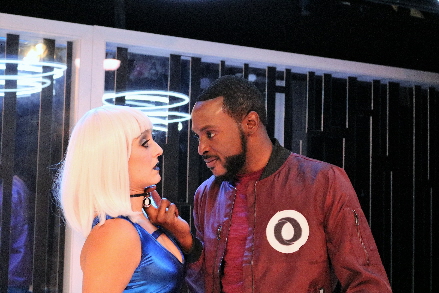 In a bit of serendipitous synchronicity with the sequel of Blade Runner and the reboot of Westworld, Primal Forces’ production of The Good Girl explores the complexities of humans creating creatures with artificial intelligence by asking who is influencing who in a world in which technology and humanity are so intertwined.

The premise in Emilie Collyer’s 2013 dark comedy set in a not-so-distant-dystopia is that gorgeous robots are programmed to provide sex as a mercantile service, an adolescent boy’s fantasy dating back to pulp science fiction magazines.

The robot, who is heard offstage but not seen, is supervised by a struggling pragmatist Anjali (Amber Lynn Benson) who has hired a repairman Ven (Jovon Jacobs) to tweak out a glitch — the robot is ending sessions in tears. The standoffish Anjali and the genial Ven realize that their unauthorized ability to program changes in the robot’s speech, behavior and standard routines makes her a far more attractive commodity for clients.

Initially, the tweaks are modest – and revealing about ego needs – such as having the robot end her sessions pleading, “Please don’t go.” The two humans (assuming they aren’t replicants) pocket the extra money that clients are willing to fork over.

They come up with ever more emotionally dangerous routines for the robot, which seems to take her cue from the humans’ relationship. (This mismatched pair obviously have had some kind of sexual hookup devoid of romance).

As these entrepreneurs push their robot’s boundaries, they have to play out scenarios for the robot to mimic — until the robot intuits something about human nature that the couple didn’t expect. At the same time, the robot has become more ingrained in their lives than they know.

The result is a one-hour spiral into the relationship of sex and emotions that is simultaneously quite funny and thought-provoking under the leadership of director of Keith Garsson. The production’s main shortcoming is that the evolving arc gets a little difficult to grasp, especially in its final third. Whether that’s the script, the acting or direction, many in the audience have to work to catch up with unclear narrative developments instead of ruminating on the thematic issues.

Still, this work that debuted in Australia and then New York is a thinking man’s hoot drenched with sex as the humans brainstorm and experiment with ever more adventurous escapades for the robot. As the play progresses, the couple unwittingly becomes increasingly protective about the titular robot much as you might about a beloved pet or a newly-adopted child. That makes sense since they are imbuing her with their own feelings, fears and fantasies.

Molded by Garsson, the intentionally quirky performances are as stimulating as the premise. Benson’s Anjali starts starchy and stiff arms genuine human interaction. Love has no place in this world of the future; sex that harbors any affection is just a trap for suckers, Benson’s procurer seems to believe. Her straight-backed Anjali stares ahead in the early scenes, unwilling to connect with Ven. But as the stakes and rewards increase, Benson loosens Anjali’s self-protective veneer.

Jacobs is a more easy-going type who probably spends his evenings in a neighborhood bar. Jacobs’ Ven is far more open and affable, whose initial interest in Anjali is her talent for baking chocolate treats. He leans his tall elastic body over and around the sole piece of furniture in the room as he insinuates himself into Anjali’s life.

Together, they are never quite a couple; that’s probably an alien concept in this society. But the actors and Garsson create characters who acknowledge their role as pawns for entities controlling this society, but who dream of something better.

Garsson has led a creative team that has done wonders with what must have been a shoestring budget in the tiny Andrews Living Arts venue. The set design by Natalie Tavares is a cold, sleek, futuristic environment bordered by slats of mirrors and topped by circular fluorescent lighting instruments. Robert D. Nation has evoked changes in scenes with his lighting plot. Milene Miranda has given Anjali a stark mask of makeup including stark white helmet of hair and electric blue lipstick which matches the gleaming dress designed by Alberto Arroyo. David Hart has injected futuristic noises of indeterminate provenance and Susan Lloyd provides the Voice of the Robot. All in all, it’s a far more polished sensory production that you might expect from this fledgling company.