Shorts Gone Wild Is Rainbow Of Gay-Themed Plays For Everyone 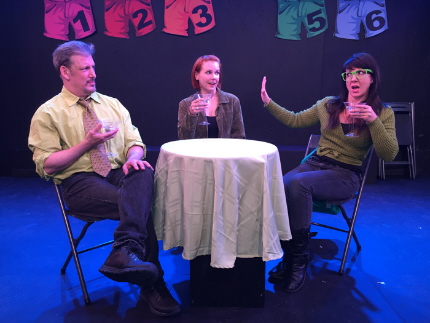 Friends Larry Buzzeo, Christina Groom and Niki Fridh spar over one-upsmanship in one of the plays in Shorts Gone Wild 3 / Photos by Andy Rogow

Since Undershorts began as an adjunct to Summer Shorts in 2008, City Theatre’s adults-only evening that morphed into Shorts Gone Wild has grown from blue material to red, green, yellow, purple – the entire rainbow flag.

If the thematic focus has tightened with the addition of co-producer Island City Stage, the material and performances have markedly improved year after year until the eight short plays in this edition, Shorts Gone Wild 3, are almost completely gay-centric while setting a high-water mark in the series’ quality.

Unrestrained laughter and some moistened tear ducts typify the audience reaction to most of these plays that examine 21st Century life for LGBTQ citizens in an evolving society where gay marriage is finally recognized by the Supreme Court. But these tales should resonate with people of any sexual identity because the underlying issues dig into how all human beings cope with each other.

For instance, in Michael Leeds’ I’m Going First, directed by Kevin Black, two gay men (Larry Buzzeo and Antonio Amadeo) outside a funeral jokingly discussion whether they can tell just by looking whether a guest likes to be on the top or the bottom. But their banter is bookended by sober discussions of mortality and its effect on their partner, a topic that will be familiar to anyone in a long-term relationship.

In the strongest piece, Hands, written by Becca Schlossberg and deftly directed by Gail S. Garrisan, two men perform interior monologues recalling a transient sexual encounter in unusually graphic detail. But we see that even in the heat of passion, the older sensitive man (Amadeo) is secretly flashing back to an earlier pivotal experience that encompassed abuse while the young partner (Craig Moody) is oblivious to anything but his impression that he is giving great pleasure to the other man.

The plays this year are delivered by eight playwrights (at least half of them South Floridians) six actors, four directors and four designers working in the tiny Empire Stage venue in Fort Lauderdale through Sept. 6 and then moving for four days to the Fillmore in Miami Beach. Continuing a tradition, the audience pulls a number out of a hat to determine the playlet will be performed next, which is taking a chance because some works are stronger than others.

The other works included:

The Anthopology Section, written by Patricia Cotter and directed by Manzelli, depicts two former lovers (Fridh and Ramirez) meeting by accident in a bookstore. Fridh is stunned and even hurt to discover that Ramirez is back from her honeymoon, setting off deep feelings of rejection. The two gingerly examine what went wrong with their own relationship that kept them from a lifetime together.

The Agenda, written by South Florida’s Michael McKeever and directed by Rogow, was a hilarious satire about a gay rights organization’s board meeting in which the members struggle to change their group’s acronym (e.g. LGBT to LGBTQ to LGBTQATTAT etc.) to be ever-more encompassing of the emerging sexual identities in a politically correct society.

My Husband, written by nationally-known humorist Paul Rudnick and directed by Manzelli, has a classic Jewish mother (Groom) who kvetches at her gay son (Moody) to get married because all of her friends’ gay sons are getting married. She comes up with a unique way to keep up with the Schwartzes that involves The New York Times.

The Oldest Living Chorus Boy Tells All, or The Last of Billy Button, written by local theater supporter Tony Finstrom and directed by Black, is a wry broad piece focusing on the wheelchair-bound titular character wearing a pink mortarboard giving a commencement speech to a dance school. The speech relives his past performing in some of Broadway’s biggest flops. Finstrom’s script fondly riffs on a theater lovers’ knowledge, but it was hard to assess because Buzzeo seemed to be still learning his lines opening weekend.

Quiche and Quinoa, written by local director Stuart Meltzer and directed by Rogow, started with two old friends (Buzzeo and Fridh) at a restaurant awaiting the arrival of another buddy (Groom) who summoned them for an emergency meeting. Fridh’s character is insanely competitive with Groom and spins at 1000 rpm trying to figure out what news she is going to have to try to top. She’ll be surprised when she finds out what it is. The script is, indeed, quite funny, but it is blessed with Fridh’s escalating Type A heroine.

The One, written by Sheri Wilner and directed by Garrisan, portrays two best friends (Amadeo and Fridh) whose sexual and romantic relationship in their youth cratered when he turned out to be gay. Now, Amadeo’s character is in a promising long-term relationship and he wants to introduce his fiancé to Fridh. But he has come to her house before the meet to try to coach Fridh not to inflame the lover’s jealousy over their continuing bond. As with almost every piece, the actors and director create a palpable sense of shared history and alchemical bonding. Their tender portrayals underline how enduring love can take many forms besides sex.

This isn’t the first sighting for most of these works. Frequent contributor Rudnick’s My Husband was seen in Summer Shorts in 2014. The Anthropology Section was mounted at Summer Shorts two months ago. 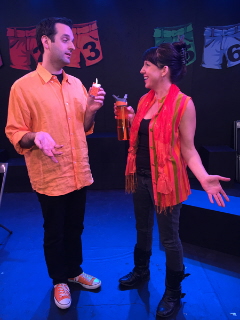 The entire cast deserves praise but the work of three of the actors deserves special recognition.

Amadeo, who was so memorable in Daniel’s Husband a few months ago at Island City Stage, usually portrays a sensitive caring person or someone a bit wacky, sometimes even a mix of the two. He isn’t really a character actor; he’s usually playing a variation of the same basic persona. But he’s one of the finest actors in the region at ripping emotions out of his bone marrow and delivering them in the guise of a credible, recognizable man who we instantly root for. Even when he is playing flawed or conflicted people, he superbly conveys their innate decency. Like a great film actor (think Spencer Tracy or Gary Cooper), he’s so good at inhabiting a character that you don’t catch him acting even though his work clearly requires skill and craft.

Fridh, whose energy powers the entire evening, is quickly becoming a major player in South Florida theater, whose name on the cast list guarantees at least one virtue in a production. Her manic friend in Quiche and Quinoa is different from the wounded former lover in Anthropology or the yearning buddy in The One. And all of them are light years from her erudite cultured writer in Thinking Cap Theatre’s Vita and Virginia last spring or the backwoods housewife being liberated in Arts Garage’s Exit, Pursued By a Bear.

And finally, Groom takes it all one step further. Able to inhabit a Shakespearean noblewoman in Henry V, a deeply trouble schoolteacher in Gidion’s Knot, eight different women in the broad farce Have I Got A Girl For You, a dissolute denizen of The Wild Party, Groom is the true embodiment of that overused term, a theatrical chameleon. Her work here in Shorts Gone Wild 3 is just as varied, just as vivid. Farcical or moving as needed, we’d watch her perform a staged reading of the Merck Pharmaceutical Manual.

This is the last show Island City Stage will produce in the vest-pocket Empire Stage in Fort Lauderdale – its home since its inception in 2012. Its first show of next season this November will be in larger rented space at Infinite Abyss at 2304 N. Dixie Highway, just south of Five Points in Wilton Manors.