Silence Is More Than Golden In Small Mouth Sounds at Arsht 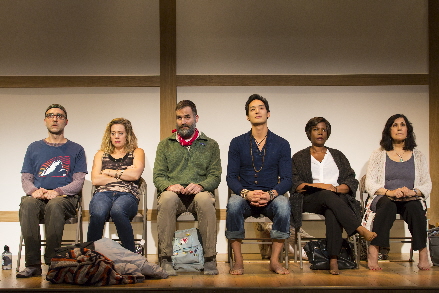 The unusual suspects in Small Mouth Sounds from Ars Nova at the Arsht Center/ Photos by T. Charles Erickson Photography

Shaw and Shakespeare might disagree, but words might not be indispensable in delivering intriguing, hilarious and touching theater as proven right now by Ars Nova’s production of Small Mouth Sounds at the Arsht Center.

The play is punctuated with grunts, moans, stamps, slaps, sighs, whimpers and snores, but other than one monologue and a disembodied voiceover from an unseen “teacher,” fewer words are spoken by the leading characters than in an entire evening with Blue Man Group.

That provides the wellspring of considerable humor, ample poignancy and significant themes about the ineffectiveness of verbal communication and the supremacy of simple human emotion. All of that is designed to remind us that in this arbitrary unpredictable world, we are not alone. And that provides just a hint of succor — humans’ bonding over our shared condition.

The premise of the script by Bess Wohl may sound like a stunt or a farce or even some oblique pretentious downtown piece of performance art: Six people are required to stay silent during a ludicrous five-day New Age retreat. But this journey is populated by recognizable folks who might be your neighbors or coworkers.

The keys to its success are, first, a cast capable of articulating encyclopedia volumes with their expressive faces and easily readable body language, and second, simply brilliant direction from Rachel Chavkin. The result is alternately hilarious and deeply moving as wounded people desperately seek a solution for coping with their painful secrets and baggage.

After a deafening rainstorm, the lights come up on a faux Japanese room designed for reflection. Entering separately and anxiously looking lost are the six: Jan (Connor Barrett), a tall genial-looking gentle soul with a long beard and a nervous smile; Rodney (Edward Chin-Lyn), a lithe very good-looking Asian-American and seemingly self-possessed yoga master; Ned (Ben Beckley) is a hapless sort with wide eyes eager to absorb any hope that he might glean; Alicia (Brenna Palughi) is a frazzled urbanite on the verge of emotional collapse; Judy (Cherene Snow) is an African-American businesswoman with a sharp sense of humor about the silliness of what’s coming; and Joan (Socorro Santiago) is her lover and helpmate. Because these funny quirky misfits share is a hint of sadness just under the surface, they cannot be written off as cartoons.

Because the show has so little dialogue and the Arsht’s Center Carnival Studio is an intimate space, the audience can focus on reading the actors’ faces. Without anyone saying much at all, we get glimpses of each person’s backstory and their secrets but especially who they are by watching their tics and habits and reactions. Hopefully, we aren’t giving much away but one person is dying of cancer, another grieves for a child, another is in the final stages of a dissolving relationship, another is trying to come through a life filled with an endless string of bad luck body blows.

These are all humorously flawed people, yet their pain is so palpable and their search for magnetic north so fervent that we are seduced in caring for each one.

Over the next hour and 40 minutes, these strangers will listen to the fatuous pronouncements of the teacher voice over a speaker (Orville Mendoza)  and interact with each other is comically clumsy but eventually effective ways. Part of the fun is watching these people trying to communicate with grimaces, hand gestures, and uninventive pantomime as they try to get around the prohibition without violating the letter of it.

Wohl doesn’t simply lampoon such self-help programs; she skewers them on a pike. The unseen teacher is full of meaningless by-the-numbers playbook bromides as “Listen, in you there is everything you need to be human” and “Are my teachings just words?… Could be.” Clearly, being able to speak doesn’t guarantee someone has something of worth to say.

The most interesting aspects occur at the end. Somewhere in all that blather, there lies a shred of truth. Wohl doesn’t let that seed germinate too far, in fact, while each person has been affected by the experience, no one has indeed learned any life-changing lesson or found a panacea. But the audience may have actually learned something even if this group did not: We are all going through the same existentialist gauntlet and that kinship should provide us compassion for each other’s plight.

Small Mouth Sounds requires an audience to invest attention, to turn their cellphones off (not on vibrate where Amber alerts will still sound) and to stop talking among each other. But the rewards are great.

The acting and direction here is a marvel of ensemble acting with skill, charisma and chemistry. And some spectacular male nudity.

This edition is a national tour of the production that played to acclaim off-Broadway with the same creative team but a different cast. It is part of the Arsht’s Up-Close series, which combines local-based productions of Zoetic Stage with imaginative break-the-mold out-of-town offerings such as those from the House Theatre of Chicago.

For a play based in silence, the evening is awash with sounds of nature and the lighting designer not only creates different environments and mood. But the spare visual approach is perhaps a bit of a joke. Chaykin and Ars Nova created the outsized scope for Natasha, Pierre and the Great Comet of 1812 – notable for a huge cast singing a densely-packed libretto while prancing around a massive luxuriously detailed Russian nightclub that spilled off a Broadway stage and into the audience. Rather than the locomotive pace of Natasha, Small Mouth Sounds moves quietly gingerly with a deliberative metabolism.

The saying goes that the eyes are window to the soul, but in Small Mouth Sounds, it’s the entire face is the giveaway.

Small Mouth Sounds from Ars Nova as part of the Theater Up Close series performs through March 4  in the Carnival Studio Theater at the Arsht Center’s Ziff Ballet Opera House, 1300 Biscayne Boulevard, Miami. Performances are at 7:30 p.m. Wednesday-Saturday, 4 p.m. Sunday, 3 p.m. on some Saturdays. Tickets are $50-$55. Running time is 1 hour 40 minutes with no intermission. (305) 949-6722 or www.arshtcenter.org.