Posted on December 8, 2014 by Bill Hirschman 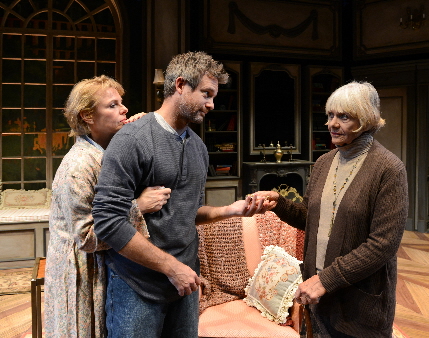 Angelica Page, Tim Altmeyer and Estelle Parsons try to get along in Palm Beach Dramawork’s production of Israel Horovitz’s My Old Lady / Photo by Alicia Donelan

You easily intuit that an armoire full of family secrets will be uncovered in the crucible of a musty old Parisian apartment in Israel Horovitz’s My Old Lady; and it matters not that you can guess some of them before they tumble into view.

What matters is not the nature of the secrets, but the gradual revelation of the persisting damage they have wreaked and whether the survivors will find a path past them.

Palm Beach Dramaworks’ finely-crafted, witty and ultimately moving production uses those secrets to expose the sometimes unintentional, sometimes thoughtless psychological injuries that parents inflict upon their children. Those progeny must come to terms with wounds whose scabs have never coagulated before they can achieve a satisfying emotional life as adults.

Horovitz’s 2002 play – recently directed by him as a film and since then tweaked for Dramaworks – is a cornucopia of delightful wordplay among articulate, literate characters and an insightful examination of human relationships careering clumsily through a thorny thicket toward a hopeful resolution.

But the pure pleasure comes from watching actors Estelle Parsons, Angelica Page and Tim Altmeyer working at the inestimable top of their game under the deft hand of director William Hayes. Theater pros may be awed by the skill of all four, but their naturalistic technique is so accomplished that most civilians will forget they are watching theater.

The plot focuses on Mathias, a 50-something American whose father died a year ago. The father left his fortune to charity and willed his son only a large old apartment in Paris, a city the father loved. Mathias is penniless after three divorces and three unpublished novels, and has spent his last dime getting to Paris to sell the apartment.

But the property is occupied by Mathilde, 92 (although she only admits to 90), and her daughter, Chloe, also in her 50s. They refuse to leave because although Mathias’ dad bought the building 37 years ago from Mathilde, he agreed to an obscure French law that allows her to stay until her death, even agreed to pay the required rent.

With nowhere to go, Mathias moves in while he tries to figure out his next step. He drinks heavily and verbally jousts with the enigmatic Mathilde and the openly hostile Chloe who wants to buy the valuable apartment for a pittance. It’s a valid if classic dramaturgical construct to trap conflicting characters in a situation they cannot easily escape, forcing them to interact and learn from each other.

To say more would violate our spoiler policy, but clearly far more roils under the surface. Astute audience members will detect, as Horovitz probably wants you to, intimations of what’s coming.

What doesn’t stay hidden long is the antagonism Mathias felt for his difficult and distant father, nor the similar if less abrasive friction between Chloe and her mother. The enmity is rooted in the way each parent treated their spouse and the fallout on their children.

Mathias rails, “If you wanna’ kill a kid, you don’t shoot him! You just do nothing! You just withhold your love, and watch the child wither and devote his miserable loveless life to pleasing you.”

Along the way, Horovitz looks at the different ways French and American cultures deal with such issues as true love and marriage. There’s even a culturally-revealing diatribe against the French treatment of the Jews in World War II and an acknowledgment of French collaborators’ pragmatic liaison with the Germans.

But the play, especially the first act, is laced with considerable humor. Mathias is a writer; Mathilde once owned a school where she also taught English for her French countrymen and foreign visitors. Chloe still teaches there. So they are unconsciously addicted to witty wordplay with repartee ranging from esoteric etymology to broad puns. Much of it is dry Gallic wit. Mathilde, who can be almost cruelly blunt, shrugs off that Mathias takes offense at some remark. She quips, “I’m 90. Subtlety is not something that interests me.”

Some lines border on the overwrought, but it’s theater and you can relish the badinage. Mathias tells Mathilde that his father and both his brothers died of a heart attack. “The heart is my family’s fatal flaw. It’s the thing that kills us.”

But the acting and direction: Many fine actors draw an outline of a character and just adorn that character’s exterior with two or three primal, easily-recognizable emotions. But these three members of the Actors Studio draw an outline and then fill it in like an oil painter, adding fine-grained brush strokes to create a being so specific, so individual, so idiosyncratic that to call these performances “believable” or “plausible” is not just insulting but missing the achievement. They are so convincing that it’s hard to believe that the actors are not that much different in real life, as is the case of many film and television stars. But having interviewed them early in rehearsals, trust me, what is on stage are carefully constructed personas.

Parsons has gotten most of the early publicity since it’s a coup for Dramaworks to have attracted such a veteran and venerated star with five Tony nominations and a Best Supporting Oscar for Bonnie and Clyde. This vibrant quintessential American, who seems 20 years younger off-stage than her 87 years, disappears inside an aged creature whose face shakes, eyes squint and must collapse into an armchair. But Mathilde’s infirmities and tentativeness evaporate (along with her accent) when stimulated by her new arrival. Parsons’ Mathilde may be whipsmart, but she has been worn down more by the erosion of what she has seen and experienced than the ravages of old age.

Page also is known in the region for three previous appearances including playing Sylvia Plath in the acclaimed Edge at the Coconut Grove Playhouse in 2005. Here, she creates a doppelganger for Mathias’ wounded soul except that she initially sees no reason to be making jokes; Page’s beautiful but flinty Chloe has built multiple layers of protective battlements studded with knife-sharp spikes. Page never gives you any hint that Chloe might be capable or interested in lowering her defenses even a millimeter, although when she does (almost a dramaturgical necessity) she makes it completely credible.

But the marvel is Altmeyer’s Mathias, a creature of caustic and acerbic wit aimed initially at his own failings and only secondarily at his father. His Mathias never seems to be whining with self-pity, although he unpacks a lot of justifiably crippling baggage. He exudes a genial but anguished Everyman vibe like Jack Lemmon did in his late life films like Save The Tiger. But there is no sense of Altmeyer creating a type, only a fully-fleshed out human being.

The byplay among these characters is compelling to audiences, but acting classes ought to be ferried in to watch such scenes as Page and Parsons wrestling over past sins.

About the only shortcoming in chemistry is that the attraction between Mathias and Chloe seems highly unlikely because they are so antagonistic with no sign of that Benedick and Beatrice feel from Much Ado About Nothing. But that’s okay, because the classic paradigm of obvious affinity-under-the-anger has been pretty overworked.

None of this work would be as solid and assured without the melding vision of Hayes. His nearly invisible direction is flawless from the varied pacing to the subtle movement of the characters to ensuring the underlying themes come clear. He has created illuminating passages of characters silently going about their business in the half-light between Horovitz’s written scenes, usually indicating the passage of time. It invests the episodic journey with a smooth narrative flow.

Especially notable is the scenic design by K. April Soroko, a University of Miami educator and veteran of regional work around the country but a first-timer at Dramaworks. She has created a note-perfect world – a once elegant but faded living room with well-worn but well-tended furniture and filled with decade-old accessories. A backdrop of Paris’ Jardin du Luxembourg can be seen through a large picture window and through gaps in the set where the walls would otherwise be.