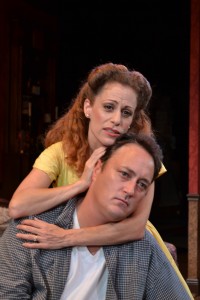 Sharr White frequently pens dialogue in Six Years that peters off half-finished when the speaker’s thoughts are cauterized by unspoken fears.

It works for Albee and Pinter and it works well for White the first 150 times he uses it in his drama at Caldwell Theatre to illustrate the huge emotional gulf between the characters and the impotency of human communication.

But it also is emblematic of the production in general directed by Clive Cholerton. It works quite well moment-to-moment, but overall it feels amorphous and, ultimately, not satisfying. Six Years lives in that purgatory where a show has much to recommend it – you can easily list shining moments — but it doesn’t coalesce enough to be compelling.

At the same time, you can recognize the hard work by Todd Allen Durkin and Margery Lowe as they portray a Greatest Generation couple trying to keep their rocky marriage intact through a tumultuous chunk of the 20th Century.

Each of their five scenes are separated by six years, beginning a few years after World War II and finishing near the end of the Vietnam War. In each, the two actors depict time’s erosion on their psyches and personalities. Lowe in particular portrays a woman who, over the decades, holds her fragile husband together while her own spirit calcifies. As for Durkin, few local actors portray the effects of debilitating angst as well as he — the lost hangdog  eyes, the curved posture, the haggard voice.

But by being so episodic, White’s script makes it hard to plug into these characters enough to feel invested in them. Dropping in the middle of a situation works more effectively on film or television.

Despite frequent allusions to the political and social upheaval outside the couple’s St. Louis home, White’s goal is to provide a Cheever-like peek into relationships fraying during the pursuit of the American Dream. Much of the Caldwell’s core audience – seniors and Boomers — will overlay their own pasts to make the production resonate for them personally.

To recap the plot requires numerous spoiler alerts, although you can predict almost every development as if you were watching a familiar liturgical tragedy.

Phil Granger is a shell-shocked vet who did not return home after his discharge. When the shattered Phil appears briefly in 1949, his wife Meredith tracks him down to find out whether there is any hope of resurrecting their marriage. Lowe skillfully depicts Mary’s terror at learning the possible answer and exhaustion from the past strain of not knowing.

Phil, suffering from PTSD before it had initials, is petrified by the future. He says, “I feel so behind that no amount of running will catch up.” But by sheer force of will, Meredith persuades the catatonic Phil to try on a day-to-day basis.

Six years later in the flush of the Eisenhower Era , Phil has becomes a semi-functioning father and blue-collar breadwinner while his resourceful wife has built her own dress shop. Phil, crippled by a hair-trigger temper, refuses to invest in a soulless housing addition championed by his friends and relatives (Gregg Weiner, David Perez-Ribada and Natasha Sherritt). Meredith, a perceptive businesswoman under a Donna Reed exterior, secretly makes the deal that will secure their economic future. But it’s clear that the profound damage from the war will poison the rest of Phil’s life and that of his family.

Six years later, in the best scene of the play, Phil is a prosperous exec on a business trip, sitting in a Chicago lounge with a sexually-free woman (Betsy Graver). He is venting elation at the re-energizing idealism of John F. Kennedy’s call to service. But his companion sees past his manic euphoria and calls him on his underlying loneliness. In response, Phil reveals that his 18-year-old baggage persists by relating a mental breakdown in the airport. On the other side of the stage, Meredith, worn out by the fissures in her marriage, is embarking on affairs.

Six years later, their son has forged his father’s signature to take basic Army training on the eve of Vietnam. Another outstanding moment in the script and in Durkin’s performance comes after Meredith begs Phil to talk their son out of going to a war that has no purpose or value. Phil explains in anguish that doing that would demean the ultimate sacrifice that his friends made in World War II.

Six years later, the couple has divorced, Meredith has abandoned her company and Phil has tracked her to a California motel. Phil confronts Meredith with her secret: She has come to Travis Air Force Base to search the faces of a planeload of returning POWs. In another fine moment, Phil notes that the victims who made the greatest sacrifice in this war are not the dead, but the loved ones left behind.

We won’t give away the play’s ending, but it does have a comforting circular closure in line with the ebb and flow of the couple’s relationship.

Still, something feels missing from the production to make it compelling. It rarely feels fully-formed in three dimensions. For instance, the secondary characters seem like mechanisms that exist solely to create dramatic situations for the couple.

The one real misstep is the visual element of the play. Tim Bennett has designed some of Florida’s finest sets, most recently the before-and-after parlor in last month’s Stuff at the Caldwell.  But here he has delivered bland, generic rooms as unconvincing as the flats in a high school play. It’s not helped by Thomas Shorrock’s lighting design which, other than the third scene, is just switch-it-on glare with no evocative feeling, no subtlety, no variation other than the five fade outs.

Video scenes from the show and interviews of cast members and the creative staff (by WPBT and uVu’s Neal Heckler):  Video 1    Video 2