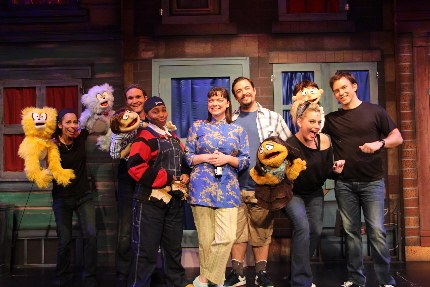 Thomas Wolfe warned that you can’t go home again, but Slow Burn Theatre Company’s revival of its 2012 production of Avenue Q is a welcome and joyful return to the neighborhood to hoist a beer with the ol’ gang.

If the sights and sounds from the 2003 Tony-winning original are just a tad too familiar from numerous iterations, the passage of time and the ever-evolving world make its lessons all the more instructive. Some numbers, like the bouncy “Everyone’s a Little Bit Racist,” have only increased in resonating relevance in the past few years, especially the past 12 months.

And its last number, “For Now,” a peppy acknowledgment that life isn’t always fair but there’s always a kind of existential hope, persists as one of the most oddly comforting finales in American musical theater – a kind of 21st Century “You’ll Never Walk Alone.”

Director/choreographer Patrick Fitzwater has assembled a delightful crew of veterans from his last production and new additions to the Slow Burn family who revel in the show’s irreverence. They deliver a vibrance and commitment that should engage and temporarily soothe the damaged spirits of much of the likely audience.

This is the first Slow Burn production that will travel to three other venues in Aventura, Delray Beach and Jacksonville.

What’s different about this “fine, fine” production is a function of the space it’s performed in. This is a co-production with the Broward Center, which this season is sponsoring two “smaller” Slow Burn revivals in its Abdo New River Room along with four “large” productions in the Amaturo theater next door. The Abdo is an infamous space laid out like a nightclub with a wide, wide platform stage compared to a relatively shallow seating area. Staging shows so as not to slight the audiences far left and far right plus battling the sound quality has always posed challenges – ones that Slow Burn now and before has come close to mastering, but many other companies have not.

Avenue Q has always fared best in a small theater, but this configuration has an unexpected effect. Usually, with a proscenium setting, you see the puppets and actors with equal prominence, intentionally exploding the childhood illusion that the puppets are people. But when you are this close to the stage, the actors overshadow the puppets, even though the performers are solid puppeteers.

Fortunately, Slow Burn’s actors invest themselves so completely in the characters that they physicalize the puppets’ emotions with their own facial expressions, body language and vocal inflections that go beyond just giving voice to the puppets. This isn’t a drawback; it’s just a different viewpoint for an audience that has seen the show before.

If you read this site, you don’t need much of a refresher. The score by Robert Lopez and Jeff Marx with a book by Jeff Whitty fuses a sunny Sesame Street vibe with a Candide-like education of naive and unrealistically optimistic Millennials. They learn that the real world frustrates the realization of dreams born out of that “you can do anything you put your mind to” philosophy they were taught from the cradle.

It posits an ad hoc family in a run-down urban neighborhood of row houses. Furry and fleecy creatures mix in harmony with humans of all ethnicities, affectionately lampooning the disillusioning disconnect between childhood and adulthood.
The puppets not only use expletives common to college dorms, but they couple in raging passionate sex on stage. They are searching for their purpose in life, acknowledging unconscious racism in themselves, negotiating the rocky road to true romance and succumbing to the seduction of suddenly available temptations.

The residents include Princeton (Rick Peña), a recent college grad whose expectations have instantly run aground; Kate Monster (Nicole Piro), a lovable teacher in training who has a crush on Princeton; the genial Nicky (Christian Vandepas and one arm of Lissa Grossman Comess); his roommate Rod (Pena again), a Republican investment banker deeply stowed in the closet; building superintendent Gary Coleman (Juanita B. Green) yes, that Gary Coleman; Christmas Eve (Ann Marie Olson) a Japanese-American with a thick stereotypical accent and the dream of becoming a mental health therapist; her teddy bear boyfriend Brian (Andrew Rodriguez-Triana), a woebegone stand-up comic; Trekkie Monster (Vandepas and Comess again), who is addicted to Internet porn; Lucy T. Slut (Piro again), a voluptuous lounge singer; the Bad Idea Bears (Vandepas and Comess again), fluffy cute hedonists and troublemakers; Mrs. Thistletwat (Comess again), a grumpy old educator, and Comess filling in for virtually every character at one point or another. 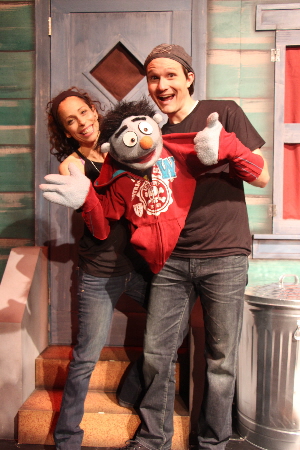 It helps that Piro, Vandepas and Olson did their roles for Slow Burn four years ago and their skill sets have only deepened. Every single cast member nails their part, but special notice is due Olson whose clarion voice soars in the torchy “When You Ruv Someone” and Vandepas who creates a half-dozen hilarious voices that make you wonder if he has more personalities than Sybil.

Peña, a founding member of the troupe as actor and costumer, once again created the nearly two dozen puppets with eyes that are eternally quizzical and searching. As an actor playing two central roles, he provided an amiable focal point to escort us through this new world of young adulthood.

Sean McClelland created a comical neighborhood with the required upstairs windows for characters to pop in an out of, lit by Jayson Tomasheski, with sound design by Rich Szczublewski.  Musical director Manny Schvartzman once again created clear, bright digital tracks and made even the less-able singers in the cast sound acceptable,

Wolfe was right up to a point: You can’t ever look at beloved haunts the same way. Even if they haven’t changed, you have. But Slow Burn’s Avenue Q remains an endearing, droll reminder that you’re not alone in these unsettled, uncertain times.

Avenue Q from Slow Burn Theatre Company runs through Nov. 20 at the Abdo River Room at the Broward Center for the Performing Arts, 201 SW Fifth Ave., Fort Lauderdale. Performances Sundays at 1 and 6 p.m.; Wednesday– Friday at then 7:30 p.m.; Saturday at 1 p.m. and 7:30 p.m.. Running time 2 hours 6 minutes with one intermission. Food and drink can be bought at least a half-hour before the show. Tickets are $45. Call (954) 462-0222 or visit browardcenter.org.