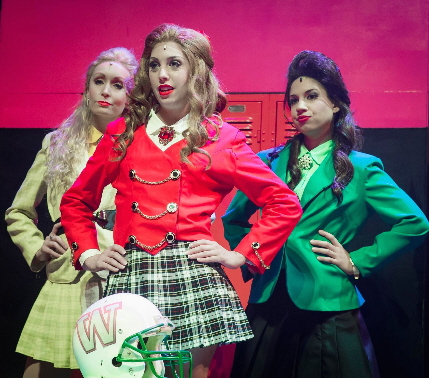 Editor’s Note: I started to write this review of Heathers on Saturday night immediately after the opening performance. As I continued to write Sunday morning, the horrible news emerged about the Orlando tragedy. Rereading what I had written, I realized the juxtaposition of Heathers and this real-life nightmare force us all once again to examine how we treat and view each other. As a result, what follows may be, probably should be, painful. It was a difficult decision to proceed. But our words were accurate and honest about the satirical yet compassionate show before the tragedy, and they remain accurate and honest afterward. The calamity and the show, in fact, illuminate these problems. None of this lessens our condolences and prayers for the victims, survivors, families, for all of us.

Admit it: You know you wanted to murder some abusive soul-crushing bullies and snobs when you were in high school. Right?

Heathers knows it and wants to liberate your daydream. So do the cool kids and not-so-cool kids at Slow Burn Theatre Company giving a hilarious don’t-miss production of the 2014 off-Broadway musical version of the 1988 cult classic film.

The success of this high-school-is-hell comedy lies in the deepest secret of late adolescence: Everybody, every single last teenager sees themselves as a hopeless misfit, even the prom queen and football quarterback. For most people, the scars last their whole life long.

That universality makes the dark satire connect with a vengeance for audience members of all ages. It contributes to the cathartic release fueling the electricity pouring off the audience throughout Slow Burn’s kick-butt production.

We’ve been saying this quite a bit recently, but this local production is more satisfying in many respects than the New York premiere we saw. Given its youth-oriented themes, its nose-thumbing irreverence and the company’s stable of skillful young artists, this lands solidly in Slow Burn’s aesthetic, especially that of co-founder, director and choreographer Patrick Fitzwater.

The show is set in Westerberg High in Ohio, a cartoonish Buffy the Vampire Slayer brand of hell with a strict caste system in which who you are forced to have lunch with is a profoundly effective threat.

Veronica Sawyer (Abby Perkins) is an incisive, acerbic misfit who longs to be accepted by the school’s Brahmin, a trio of privileged snooty blow-dried teens all named Heather (Sunny Gay, Cristina Flores and the sublime Leah Sessa). They sense a fawning acolyte to abuse; so they test her willingness to conform by pressing her to trick her overweight childhood friend, Martha (Stephanie Trull) in a humiliating prank. Dim-witted football stars (Justen Fox-Hall and Domenic Servido) bully everyone with a mindless heartlessness that rivals the Heathers’ calculated sadism.

But Veronica’s surrender is rebuked by the new kid in school, the dark trenchcoat-wearing and sardonic J.D. (Bruno Faria) whose sexy disaffectedness sugarcoats a nihilistic streak. Eventually, they are thrown together and their classmates start showing up dead when the misfits rebel against the tyranny of the ultra-conformists.

The score encompassing pop rock, Broadway production numbers and gospel is by Laurence O’Keefe (Legally Blonde) with Kevin Murphy (Reefer Madness) providing book, lyrics and some of the music. Fans of the movie will cheer that many of the catchphrases by screenwriter Daniel Waters are present, from “What’s your damage, Heather?” to the R-rated mainstays “Well, f**k me gently with a chainsaw” and “Dear Diary, my teen-angst bullsh** now has a body count.”

The crowd opening night screamed with joy each time an actor uttered a familiar line. The loudest came when Veronica rebels at Martha’s mistreatment and Heather Chandler threatens to renounce her. The drunken Veronica throws up on her. Heather sneers, “I brought you to a party and what’s my thanks?… I got paid in puke.” Veronica shoots back, “Lick it up.” The crowd at the Amaturo went nuts.

While the musical draws deeply on the film, the tone is completely different. The movie was a simple wish fulfillment revenge fantasy like a teenager’s version of Charles Bronson’s Death Wish flicks. It was also darker: Christian Slater played J.D. from the outset as a dangerous bad boy with a quickly emerging pre-existing homicidal bent.

The musical is more broadly comic, far more sexually-drenched and the parade of cruelty even more nasty. But under the satire, this Heathers is decidedly more compassionate toward even its most reprehensible characters who have been given forgivable motivations. To get the happy ending that most musicals seem to require, everyone must learn how to get past the hell of high school with a Kumbaya recognition that we are all just trying to escape the agony of adolescence, even the Heathers of the world.

But O’Keefe and Murphy revel in the freedom to be broader and raunchier than the film. The jocks sing gleefully to Victoria as they prepare to rape her, “You make my balls go blue.”

Yet the movie has much to do with the musical landing so well. A large segment of the audience in New York, at Slow Burn’s opening night and reportedly at the two previews were in their 20s coming to a musical very few knew existed. But it had that title. Keep in mind, this movie opened a quarter-century ago. It has been shown on television, but not often in the past decade. So besides the word of mouth that has built many a musical’s following (think Wicked), these young people must have seen it on television and videotape in their youth, maybe because their parents loved it or a friend raved about it (think Rocky Horror).

The cast clearly is having the time of their lives. If FPL worries about a power shortage during a future hurricane, they should back up a truck to the Amaturo this month and download some of the energy exploding from the stage. 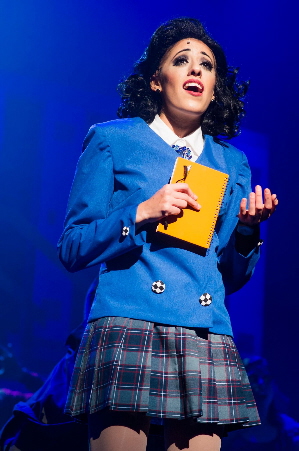 Perkins (the lithe lovely Mimi in Slow Burn’s Rent) anchors the evening, carrying the audience as she agonizes about being ostracized, then rebels, and then experiences even deeper angst about the piling bodies. Perkins exudes the outsider’s sharp observational wit as well as the guilt for betraying her basic decency. Like every other person in the cast, she has a clear clarion voice that expresses emotions like a cry from the heart. She also snaps off the script’s retorts with enviable topspin such as “I resign my commission in lip gloss Gestapo.”

But the standout is Sessa whose every breath exhales the regal entitlement of someone who lives to humiliate and subjugate the peons around her. In perfect makeup and coiffed long tresses, the leggy Heather Chandler is a nightmare as a proudly shallow human being and yet everything so many teenagers aspire to. Sessa has one of the best voices in the region, but she rarely gets to rip it loose like she does with her backup Heathers in the anthem to sexual desirability, “Candy Store.” Leading her coterie, she cannot walk across the stage except runway style with one leg defiantly crossing over the other. She nails Fitzwater’s choreography with imperious head tosses and endless hip twitching as if her nether parts were snapping at some prey. Flores and Gay are step for step as delightfully vicious as the other Heathers.

Faria (Slow Burn’s Rent and Carbonell-nominated for Bonnie & Clyde) may not have Slater’s dark destructive sardonic vibe. But he credibly morphs an appealing puppy dog demeanor into a darker unhinged territory as the homicides seem a logical answer to the injustice of a cruel world. Blessed with a smoldering voice, he can caress a song with wistfulness or attack it with anger.

Fox-Hall and Servido’s doofuses so proud of their cluelessness are a highlight of the entire evening with hilarious physical comedy likely designed by Fitzwater. They create inspired lunatics who are so blithely cruel, so entitled that you know it’s in their genetic makeup. You almost feel sorry in the foresight that this is the high point of their lives in an arc that would otherwise end with them pumping gas or asking if you want fries with that.

Slow Burn has a track record for finding outstanding young performers you have never noticed. This time it’s Trull whose performance of the late second-act solo “Kindergarten Boyfriend” is as poignant and touching a depiction of the loneliness of teenage outsiders as you’ll see in a musical.

Fitzwater’s double-duty as choreographer once again shows in his fluid, kinetic staging in ways that few other local directors achieve. He also adds scores of little grace notes such as having someone wave the rainbow pride flag as the capper to a production number.

Sean McClelland’s set is dominated by two tiers of Day-Glo painted school lockers, evocatively lit by Becky Montero. The sound by Rich Szczublewski is strong, but the band sometimes overpowers the singers and many of Murphy’s witty lyrics were lost, even in the fifth row of the theater.

As always, musical director Manny Schvartzman has aurally-sculpted his cast and musicians in a production that has much more music than it might appear. His drum-tight band includes Roy Fantel on percussion, Rupert Ziawinski on bass, Guillermo Gonzalez on guitar, Derek Ganong on trumpet and Richard Kissinger on reeds.

Early indications are that tickets may be selling quickly, so if you’re interested, you might want to snatch them up now. When word of mouth catches up, seats are going to be scarce.

Heathers the Musical from Slow Burn Theatre Company runs through June 26 at the Amaturo Theater, Broward Center For The Performing Arts, 201 SW 5th Ave., Fort Lauderdale. Performances are Thursday through Saturday at 7:30 p.m., and Sunday at 2 p.m. Running time 2 hours 20 minutes with one intermission. Tickets are $45. Call (954) 462-0222 for tickets, at www.browardcenter.org or #Ticketmaster.com; in person at Ticketmaster outlets or the Broward Center’s Auto Nation Box Office. Info at www.slowburntheatre.org. 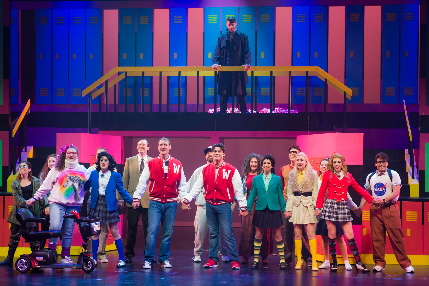