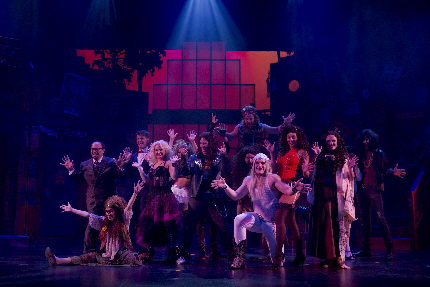 If there’s any way to get folks to the theater who don’t usually go, Slow Burn’s Rock of Ages can do it.

On opening night, it wasn’t your regular Broward Center crowd — many dressed to the nines in rock band T-shirts, cups of beer in hand, and looking like they’d be heading out to one of the bars on Himmarshee after the show. Plus the hoots, hollars, and squeals coming from the audience made the Amaturo Theater feel more like a rock stadium than an auditorium.

Director/choreographer Patrick Fitzwater knows exactly how to squeeze every inch of character out of this cheesy, goo fest of a jukebox musical to entertain aforementioned non-theater types, who can’t wait to re-live the glory days of the 1980s, of which the soundtrack of the show relies.

The banal storyline is right out of a vaudevillian playbook. Bookwriter Chris D’Arienzo’s plot is about a small-town girl from Kansas who arrives in Los Angeles with big dreams to become an actress; her name oh-so appropriately Sherrie (Kristi Rose Mills) so that the boy she meets, rock wannabe Drew (Stephen Rochet) can serenade her with that classic Journey hit, Oh, Sherrie in Act Two. Last name, Christian – Night Ranger’s Sister Christian anyone? Of course, Drew has been Waiting For A Girl like her to come into his life. The reference is to the 1981 Foreigner tuner Drew sings in Act One. By the way, despite Drew’s Def Leppard T-shirt, you won’t find a Leppard song anywhere (the band wouldn’t grant the rights to their tunes for the Broadway musical), but there’s enough of Whitesnake, Poison, Quiet Riot, and Guns ‘N Roses to satisfy any metalhead’s appetite, all within a soundtrack of 28 1980s hits.

There’s a subplot here, too, which is a mere vehicle for Rock to have a reason to include We Built This City (1985 Top 10 hit for rock group Starship) about a German developer, Hertz (a villainous Matthew Korinko) and his chocolatier son, Frantz (a hilariously and tartly swishy Thomas Porat) who want to tear down the beloved Bourbon Room, the rock club famous for giving a legendary band their start. This also gives the bookwriter the addition of hippie character and tree hugger Regina, pronounced Re-gyna, who is going to chain herself to every building before the wrecking ball comes crashing in. Ashlley Rodriguez is a pint-sized powerhouse leading the Quiet Riot cheer song We’re Not Gonna Take It.

There’s the emcee, who weaves in and out of the story, frequently breaking the Fourth Wall a la a Shakespearean fool who serves as the narrator, and the play within a play device is good for a few laughs. Cameron Jordan as Lonny appears to have channeled Jack Black for inspiration, but he mines the role (the second choicest in the show; we’ll get to the first in a bit) especially in the we-didn’t-see-that-coming surprise reveal as he and Dennis (Johnbarrry Green) sing REO Speedwagon’s I Can’t Fight This Feeling to a hilariously choreographed pas de deux. Cue applause for Fitzwater. Green is unrecognizable, and dumbfoundedly funny as the pothead, bar owner in long wig and John Lennon-esque glasses, and making quite an about face from the role we just saw him in as the beleaguered father in Measure for Measure’s Next to Normal.

Rochet, who has played the role before in another production, carries the show with his likeable doe-eyed Drew, a.k.a. Wolfgang Von Colt, and a voice that can sing power ballads as well as rock anthems with equal aplomb.

Rose Mills as the gal to his guy keeps Sherrie stuck on one note, with shades of Cyndi Lauper, which works well for the first act, but falters when the character needs to toughen up and Harden Her Heart as she goes from good girl to sleazy stripper.

Rebeca Diaz as Justice, the den mother to the stripper girls, has an air of Heart’s Ann Wilson with a bit of Stevie Nicks tossed in, which is so absolutely fetching when she brings Pat Benatar’s Shadows of the Night to light.

So, the choicest role in Rock of Ages is bad boy Stacee Jaxx, a cross between Steven Tyler and Axel Rose, and played by Tom Cruise in the 2012 film version. Clay Cartland kicks out the jams as Jaxx, the narcissistic lead singer of Arsenal, who is leaving the band to go solo. Cartland has (perhaps knowingly or unknowingly) imbued in Jaxx a bit of Georgia McBride, the part at Gablestage that earned Cartland a Carbonell nomination last year as an Elvis impersonator turned drag queen. Still, he can’t help but steal every scene he’s in.

But the real star of the show is Fitzwater’s choreography, ample amounts of pole-dancing, swiveling stripper moves, and an endless supply of bumping and grinding, all designed with delightful decadence to fit like a perfect Rubik’s Cube into the 1980s soundtrack. His ensemble — Meredith Pughe, Christie Rohr, dance captain Emily Tarallo, James Giordano, Sahid Pabon, and Elijah Word (who also doubles in a few character roles) — helps make sure the heat is turned up to high.

Musical director/keyboardist Jeff Hess gives the rock tunes sizzle, but still helps them maintain their context in the musical. The band that keeps things rolling is a talented bunch: Guillermo Gonzalez and Andrew Gilbert on guitars, Roy Fantel on drums and Pat Ward on bass.

Michael McClain’s Bourbon Room set, with its memorabilia packed walls, almost reeks of stale smoke and beer, and costumer Rick Pena’s garter belt get ups, along with the 80s costumes are eye-catching. Thomas M. Shorrock did the lighting design and Rick Szczublewski had the daunting task of designing the sound for such a sound heavy show.

Slow Burn Theatre doesn’t shy away from these bold endeavors, and this is another one of those daring choices.

Rock of Ages isn’t your grandma’s musical, and amen to that.

Rock of Ages presented by Slow Burn Theatre Company through July 1 at the Amaturo Theater, Broward Center For The Performing Arts, 201 SW 5th Ave., Fort Lauderdale. Performances are Thursday through Saturday at 7:30 p.m., Wednesday at 1 p.m. and Sunday at 2 p.m. Running time about 2 hours 20 minutes including one intermission. Tickets are $25-$60. Call (954) 462-0222 for tickets, at www.browardcenter.org or #Ticketmaster.com; in person at Ticketmaster outlets or the Broward Center’s Auto Nation Box Office. Info at www.slowburntheatre.org