Slow Burn’s Sweeney Todd Is Competent But Not Thrilling 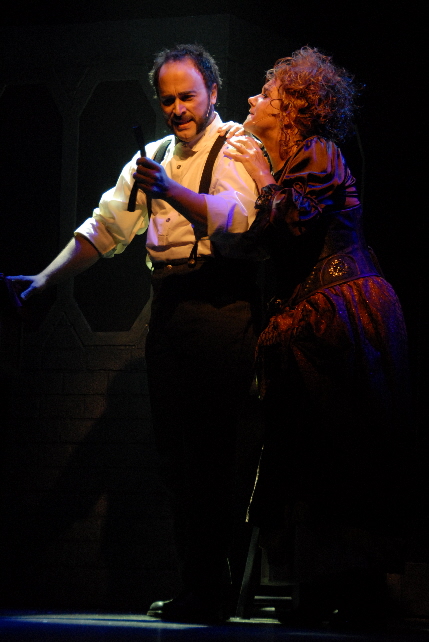 So much is right about Slow Burn Theatre Company’s scaling of that Everest of musical theater, Sweeney Todd, that there’s no shame to acknowledge that it’s a competent not a transporting production.

Competent is not a backhanded compliment when a troupe is taking on one of Stephen Sondheim’s transcendent masterpieces and striving to avoid copying earlier productions.

But Slow Burn has raised expectations so high with excellent productions of Into The Woods and Side Show that even its champions should admit that this is double or a triple, not a home run.

If you’re on this website, we likely need not recap the plot and theme of this pulpy 1979 revenge tragedy crafted by Sondheim, master bookwriter Hugh Wheeler and director Hal Prince from a 19th Century English folk tale turned into a 1973 play.

So many aspects of Slow Burn’s rendition work so well under the leadership of director Patrick Fitzwater that it’s difficult to pinpoint where it falls short. It’s missing the ambiance of a corrupt dog-eat-dog society perverted by a menacing evil. Almost everyone on stage lacks that deeply-buried dementia that makes you fear that blood could be shed at any moment. There is a sense of rage – certainly in Matthew Korinko’s Sweeney – but no sense that he or anyone else might suddenly come unhinged to snap the neck of a songbird or slit your throat. You should feel empathy and terror about the same characters, and we feel neither.

To put it on an elemental level, Sondheim aficionados leaned forward in their seats opening night yearning for – more.

That said, celebrate virtues like the freshness that Korinko and Karen Chandler’s Mrs. Lovett bring to the glorious English music hall pun-fest “A Little Priest.” Working with Fitzwater, they sidestep earlier incarnations of this waltz of Brechtian pragmatism and therefore make it a real scene of musical theater, not a legendary showstopper. It’s lovingly adorned with tiny touches such as Mrs. Lovett rejoicing by sashaying the folds of her skirt like a can-can dancer.

Or savor Korinko and Shawn Wayne King as the venal judge singing a soaring duet literally on the razor’s edge of bloody murder in “Pretty Women.”

Or enjoy how Fitzwater has deftly infused choreography (for the first time we’ve ever seen) in appropriate places such as a busker-inspired outburst among the customers in the second-act opener “God, That’s Good.”

And be grateful that Slow Burn has once again cast a cadre of darn good non-Equity singers and band musicians who do justice most of the time to Sondheim’s log flume ride of changes in tempi, meter, keys and his brilliant but sadistically difficult lyrics, thanks to the musical direction of Manny Schvartzman.

As with Into The Woods, the cast’s enunciation is unusually crisp in the first act, notably in Bruno Vida’s delivery of Tobias’ pitch to the crowd before the shaving contest with Pirelli, Ann Marie Olson’s different kind of pitch as the Beggar Woman, and Kaela Antolino’s dewy Johanna singing to her fellow captives in “Green Finch and Linnet Bird.” Unfortunately, a sloppiness invades a lot of those lyrics and even some of the ability to hit notes in the second act.

Back to Korinko and his haunted Sweeney. His mellow baritone skillfully navigates Sondheim’s music as well as anyone on stage with a comfortable smoothness that caresses songs like “My Friends.” If he doesn’t exude the potential of a hair-triggered holocaust, he delivers the smoldering mourning and the fiery outbursts with the necessary ferocity to make his murderous rampage believable.

Chandler is a retired west coast teacher new to Florida and she has made a commendable local debut here. Her strong and agile voice nails Mrs. Lovett’s introductory “The Worst Pies In London.” She, too, doesn’t seem quite as demented and dangerous as you’d hope, but she’s obviously having a great time with the role and her pleasure is infectious.

Besides the aforementioned the Antolino, Vida and Olson, notice is due Christian Vanderpas’ callow Anthony who sweetly croons “Johanna,” Sean Dorazio’s Beadle and Rick Pena’s Pirelli.  King, another veteran actor newly arrived in Florida, is uneven. He’s solid in his numbers with Korinko, but his big solo, the literally self-flagellating reprise of “Johanna,” fell flat.

The inclusion of that number does underscore another virtue of this production. Over the years, songs have been added, deleted and abbreviated. This production restores almost all of the material.

Once again working with a shoestring budget, set designer Ian T. Almeida, lighting designer Lance Blank and costume designer Rick Pena work overtime to invent the physical world. All have striven to create a steampunk aesthetic (such as characters wearing aviator goggles with tinted lenses) that thematically fits a show set during England’s Industrial Revolution. The set does betray the limited budget but the lighting remains imaginative and evocative; there’s a wonderful moment when a spotlight jabs into the audience to remind them that they are as much a part of the world as the characters. The sound overseen by Traci Almeida was still in shakedown mode opening weekend with missed cues among other problems.

In the full disclosure department: Sweeney Todd is one of my favorite shows of all time and I’ve seen probably five professional productions, every one of them superb thanks to generous budgets and access to the finest actors in the world. Those memories don’t help anyone watching the underfunded Slow Burn, even though I’m a huge fan of their talent, their energy and their ambition for producing work you won’t see at mainstream houses like the Maltz Jupiter Theatre.

But for a show that’s being mounted literally 50 times around the world over the next four months, Sweeney is almost never done in South Florida. It may have been done by Florida Atlantic University and Pembroke Pines Theater of the Performing Arts, but that’s about it. So honor Slow Burn, who also did Sondheim’s Assassins, for resurrecting Sweeney from his grave with passion and commitment.