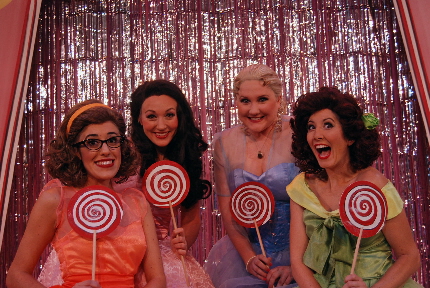 The Broward County Fair may not materialize this year, but fear not. A bountiful supply of sweet and tasty cotton candy (spiked with a bit of kick) is on hand at Slow Burn Theatre Company’s The Marvelous Wonderettes at the Broward Center for the Performing Arts.

Although the confection delivers about 30 girl group standards from 1950s and 1960s, the delightfully daffy offering is not a jukebox musical that simply unreels song after song with lame or no connective material at all. Wonderettes has a farcical script that ingeniously integrates songs into a revelation of character and even a light commentary on how real life blunts adolescent dreams.

But the headline is that Slow Burn has hired four terrific actress-comedienne-singers: Julie Kleiner, Amy Miller Brennan, Abby Perkins and Lindsey Corey (née Forgey). Working under the leadership of director/choreographer Patrick Fitzwater, these triple threats can blister the paint off the walls with their vocals and tease chuckles from the audience with a cocked eyebrow, yet – and here’s the real secret – plumb surprisingly genuine emotional depth out of bubblegum tunes of the 50s and early pop-rock of the 60s.

Slow Burn and Fitzwater are better known for the edgy thought-proving fare such as next to normal, Parade and Side Show. But Slow Burn also has proven a flair for frothier summer fun such as High Fidelity, The Wedding Singer and Xanadu. So choosing this piece is not a stunning surprise. The achievement is how Fitzwater sets a tone that gently lampoons the naiveté of an era and honors the honesty of its root emotions at the same time.

It’s the 1958 prom for Springfield High School (“Go chipmunks!”) and the lead singer of the band scheduled to perform has been sidelined for smoking on campus. So four friends are drafted to croon popular hits from the past decade. All are popular peppy girls in the throes of classic teen relationships with boys mirrored in the songs.

From the opening number, the intricate harmony of “Mr. Sandman,” the actresses and Fitzwater capture that endearing delighted-to-be-performing-in-the-spotlight and simultaneous discomfort that comes from being afraid of doing something embarrassing.

Each girl is a tad different: Susie (Corey) is a lovably giggling innocent in a relationship with the unseen lighting booth operator Richie who flashes the lights for her. Missy (Perkins) is a slightly nerdy organizer with requisite glasses with “A Secret Love.” Betty Jean (Kleiner) is ebullient and driven, in competition with her former best friend, the lovely Cindy Lou (Miller Brennan) who has just stolen her boyfriend Johnny, as well as her first solo, “Allegheny Moon.”

Between numbers, the girls attempt to win votes for prom queen. But mostly, they sing. Sometimes they (meaning the characters and the actresses) blend in milkshake smooth harmonies and other times three will back up one in the spotlight. Some of these songs have never sounded better. During the banter, secrets pour out as the first act closes toward the announcement of the prom queen: Susie/Corey, who blows the audience away with “Hold Me, Thrill Me, Kiss Me.”

The second act is set at a 10-year reunion in which the estranged quartet have been persuaded to get back together to perform. Their opening blast of Martha and the Vandellas’ “Heatwave” scorches the auditorium like a flamethrower. It underscores thematically that sex and serious rocky relationships are now part of the landscape.

But the comedy keeps coming. The married housewife Susie waddles on several months pregnant. Corey’s physical and vocal exertions are hilarious and she nearly stops the show during “Heatwave” when she looks at her belly and sings woefully, “I’ve never felt like this before.” Missy, now a teacher, has had a surprising beau for the past few years – but one who seemingly can’t commit. Betty Jean’s marriage to the faithless Johnny has run aground and Cindy Lou has finally found self-acceptance with an even more unusual lover.

The script written by Roger Bean may not seem like much, but in retrospect, you realize he has wasted nothing. Every piece of information dropped in passing is a setup for a song as much as an hour later. For instance, Cindy Lou says in the first act that she is working at the candy store; in the second act set in 1968, the girls ask her how she met her new boyfriend, she sings “I met him at the candy store…” which, of course, sweeps into “Leader of the Pack.”

We could spend another ten minutes listing how each woman nails number after number, and the song list is exactly what you expect it to be. But it’s hard to overemphasize how the actresses, with Fitzwater and musical director Manny Schvartzman, make this piece work, first, with flawless vocals and then by playing the roles without a shred of winking. Their willingness to courageously inhabit the earnestness as naifs and later as chastened women elevates this show above so many similar pieces. First among equals is Kleiner who gets a trio of rue-filled numbers that are touching not comic: “I Only Want to Be With You,” “That’s When The Tears Start” and the essential “It’s My Party.”

Fitzwater has not only found the right tone, but infused it with an unabridged encyclopedia of every 1950s and 1960s girl group dance move you ever saw on American Bandstand and The Ed Sullivan Show.

The music is pre-recorded by Schvartzman because while the sound in the renovated Abdo is better than it has been in years, reportedly it still poses problems for the acoustics of a live full rock band. But Schvartzman magically delivers such a full satisfying sound from Michael Borth’s orchestrations and Brian William Baker’s arrangements that you wonder if he’s not behind the curtains playing live. Schvartzman is also partly responsible for the blending of the four glorious voices and shaping those solos.

House costume designer Rick Peña has faithfully recreated the period while teasing it unmercifully. All the girls are in poofy prom dresses in pastel sherbet colors in the first act, and sparkling mini-skirts and white go-go boots in the second. A nod, too, to Fitzwater for styling and cutting the outsized wigs that make a hilarious transition in the intervening decade.

Wonderettes has become a staple of regional and community theaters since bowing in 1999; Actors’ Playhouse mounted it in 2009 with Kleiner and Miller Brennan in the same roles. Part of what makes it play even better this time is that it’s often mounted in large auditoriums; the relative intimacy of the Abdo New River Room with 144 seats around tables allows the actresses to rein in (slightly) the cartoon-sized antics that would distance an audience.

Wonderettes kicks off an overhauled series at the Broward Center using the renovated Abdo New River Room. The space is still the multi-purpose room used until recently by the Laffing Matterz improve troupe. But it has lost that institutional flavor. It has been painted, the sound and lights have been noticeably upgraded, an array of lamps with assorted shades hang from the ceiling, a permanent bar is set into a wall, established, the tables and chairs for the cabaret seating seem nicer.

The Broward Center invited Slow Burn to produce some less edgy material there and the company will produce the 25th Annual Putnam County Spelling Bee Feb. 26-April 19. The center also is independently producing the one-man show about a restaurant reservations clerk Fully Committed with John Manzelli and the interactive Tony N’ Tina’s Wedding. All but Wedding are a modified dinner theater arrangement. The ticket covers the show, but entrees, desserts and drinks are available separately with table service.

The Marvelous Wonderettes runs through Nov. 23 at the Abdo New River Room at the Broward Center for the Performing Arts, 201 SW Fifth Ave., Fort Lauderdale. Performances are 7:30 p.m. Thursday-Saturday; 3 p.m. Sunday. Tickets are $45 and do not include the food or drinks. Buy tickets online at BrowardCenter.org, ParkerPlayhouse.com or Ticketmaster.com; by phone at (800) 745.3000 or TTD/TTY at (800) 359.2525; in person at Ticketmaster outlets or the Broward Center’s AutoNation Box Office.