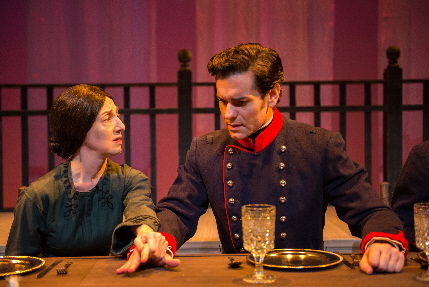 Sung with the simplicity of a haiku of unassailable truth, this declaration is among the most powerful and complex expressions in theater history of an all-consuming undeniable love.

It is only one of several incisive and sophisticated assessments of the profundity of abiding true love as opposed to transitory romance in the Stephen Sondheim/James Lapine musical Passion, given a memorable outing in Zoetic Stage’s courageous production of a famously difficult and divisive work.

To say that it’s not to every intelligent patron’s taste is an understatement; even Sondheim fans split company over the piece. It’s fluid score and episodic narrative are about as far as mainstream theater can get from traditional verse-and-chorus structure and predictable rhyming schemes; it’s even pretty far out on the edge as far as Sondheim goes.

But if you can open yourself up to it, commit to it, weather the more difficult recitative passages, Passion is a transcendent work of performance art with the power to rip into your psyche and reaffirm the transformative power of love.

Unlike the precise but flat video version for television, Zoetic’s is powered by director Stuart Meltzer’s vision, two very strong lead performances by Nicholas Richberg and Anna Lise Jensen, and a brilliant one by Jeni Hacker (an adjective chosen very carefully).

The score by Sondheim and the book by the original director Lapine is marked by a perceptive intelligence and sophistication that is intellectually stimulating and therefore exudes a coolness – a charge Sondheim has fought his entire career.

Yet, the piece is well-named because passion, indeed, flows out of the characters and washes over the audience. While it is difficult for at least half the show to emotionally connect with the protagonists, a willing audience will suddenly awake an hour into it that they have been invested in the proceedings for some time. As the show reaches its climax, patrons may discover their throats are closing up to keep their heart from leaping out of their bodies as death and emotional devastation are transcended by an overwhelming love, blinding in its purity.

The work is based, improbably enough, on an unfinished 19th Century Italian novel Fosca and a resulting 1983 Italian film, Passione d’Amore, that the omnivorous movie fan Sondheim ran across. Passion won the 1994 Tony Award, although its stiffest competition was Beauty and the Beast.

The musical, set in the latter 1800s, centers on Giorgio (Richberg), a devastatingly handsome rising Army captain in Milan, having an affair with an equally gorgeous married woman Clara (Jensen). We find them nude in bed in the midst of an ecstatic duet. But he informs her that he is being transferred to a remote mountain outpost.

Once the literature-loving Giorgio arrives among a cadre of hardened officers, he meets the commander’s reclusive cousin, Fosca (Hacker). She is homely, sharp-featured, afflicted with fatal illnesses, and has a mercurial personality that mixes shyness and boldness, a pragmatic cynicism of a world that has rejected her alternating with a morose self-pity, a bottomless yearning for love and not a shred of hope that it can come true, a seeming simplicity yet skilled at manipulation. And that is only half of it.

Attracted by Giorgio’s beauty and sensitivity, Fosca latches on to him with a relentless obsession. Giorgio, a gentle soul faced with such ferocity, is persuaded by her doctor not to resist her advances. That fuels Fosca’s pursuit, leading good-hearted Giorgio to become horrified, as he expresses in his letters to Clara. The situation becomes ever more complicated as all three are drawn deeper and deeper in a tragic whirlpool.

The contrasting light-and-dark of the relationships is stark. But the unbridled depths of Fosca’s affections make Giorgio aware that Clara’s love for him, while genuine and deep, has rational and reasonable limitations. Fosca’s flash flood force of feelings have absolutely no limits. As he sings, “Love within reason – that isn’t love.”

We won’t spoil how the specifics of how the plot plays out — although the ending is intentionally pre-ordained, but tragedy is triumphed over by a redemptive resolution that is deeply moving.

Everything you see and hear has the imprint of Meltzer and musical director Caryl Fantel who guide the ever-intertwining musical strands like the lovers’ bodies in the opening scene.

The lead performances are unassailable. Richberg, a core member of Zoetic’s team, obviously has a fine voice. But his most notable quality in almost every role is his ability to inhabit characters so completely that you simply forget there is an actor onstage. This is especially evident here in which he makes credible the most uncredible of metamorphoses depicted on paper: coming to genuinely love Fosca with a devotion equaling hers.

Jensen, a New York-based actress with considerable regional credits, is just as convincing even though her role is the least defined. Her lovely soprano excels at communicating both Clara’s joy in her relationship with Giorgio and her bewilderment when matters turn as they do. Both she and Richberg have voices like rich full-bodied wine.

But leaving the best for last is Hacker. Year after year, in work that is worthy of her and much that is not, she reliably outshines almost anyone else on stage with her. But finally, she gets the role she deserves. She creates Fosca with a technical skill and complexity of passions that constitute one of the finest musical theater performances we have seen down here in 22 years.

Eyes brimming with pain, her Fosca has no censoring device, no restraint. Emotions play across the exterior of her vulnerable skin like arcing electrical synapses. Fosca does not balk at entrapping Giorgio and yet Hacker makes the audience feel compassion for someone driven by the extremity of their feelings. Hacker’s expressive phrasing of Sondheim’s lyrics is unique and her mezzo voice easily handles both the soaring top notes and the dark colors of the bottom of her range.

The rest of the cast have fine voices – Mark Sanders in particular as Fosca’s cousin – but to be fair, many of them seemed to be still trying to master the monstrous score on opening night. Others in the roster include David Kwiat as the well-intentioned doctor who irresponsibly engineers the liaison, plus Stephen G., Anthony, Clay Cartland, Robert Fritz, Casey Molino Dunn and Brian Reiff as the officers. Incidentally, Zoetic has taken the unusual step of having members of its Young Artist program understudy some parts and support the cast on stage in tiny roles, Timothy Boehn-Manion and Kelly Gabrielle Murphy.

Meltzer, a master of pacing, has the guts to let this show move at its own deliberate gait. While never obvious, he makes up for it by keeping characters in motion. He also brings out performances that are emotion turned into music turned into flesh-and-blood.

Michael McKeever’s evocative set design thrusts a platform with a turntable into the audience surrounding it on three sides and backing it up with a multi-level playing areas. It is lit with endless variety to create differing places and moods by Rebecca Montero. The costumes supervised by Ellis Tillman reportedly draw heavily from some of the original garments of the Broadway run.

There is no way to emphasize sufficiently how this work will not appeal to all cultivated people; it’s a good thing there isn’t an intermission or a score of people would not return. A melancholia marks much of the evening and in true Sondheim-Lapine tradition, the marrow of the work is a yin-and-yang vision of love that is light years from Valentine’s Day.

But like its 2014 triumph with Sondheim’s Assassins, Zoetic deserves the highest praise for tackling a difficult work with such skill and, well, passion.