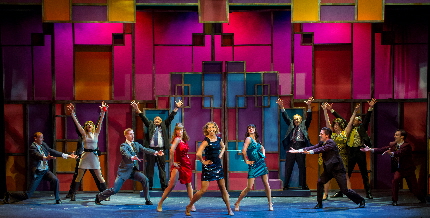 The story of a morally compromised young man who becomes the enabler for serial adulterers, solely to advance his career path in big city corporate America, does not sound like prime material for a musical comedy.

But Promises, Promises parlayed an up-to-the-moment pop score for 1968, a witty and insightful script, frenetic choreography that caught the zeitgeist of the time, and some deceptively subtle performances to become a wildly-popular hit just as the social fabric of the country was in transition.

Broward Stage Door’s earnest intriguing revival does not sidestep that this is a period piece that satirized the period in question, especially the problematic ethical laxity of its hero.

What it is still hard to analyze fully, hours after the curtain has gone down, is exactly how we “enlightened” 21st Century denizens should process the sexist, objectifying attitudes that were de rigeur a half-century ago – and to a degree, how far we have or haven’t come in those 50 years.

At the same time, perhaps it’s the once-removed sound of the digital music or the lack of razor crispness in the acting and dancing that needs a bit of urban edginess that cause the production to feel a bit muted, like it was being viewed through muslin.

The plot centers on a nebbishy narrator Chuck “C.C.” Baxter (Peterson), an affable young accountant lost in a mega-insurance company in swinging New York City. The ambitious grunt is angling for promotion by loaning out his small apartment to four married executives for evening assignations with women picked up from bars or the steno pool. 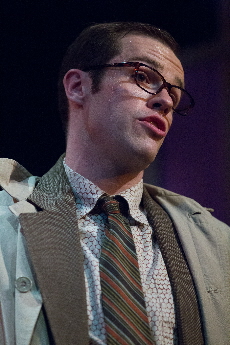 The hapless Chuck has an undeclared crush on a waitress in the company cafeteria Fran Kubelik (Sanford), a situation he explains directly to the audience including some imaginary dream conversations he only wishes he had with her.

Eventually, the powerful ultra-smooth head of personnel, Sheldrake, (James A. Skiba) promises Chuck a promotion if he will stiff the four managers so that Sheldrake can take his own mistress to the apartment. It will surprise no one in the audience that Sheldrake’s mistress, who he has been stringing along with empty promises of divorcing his wife, is, of course, the lovelorn Fran.

The meat of the tale is watching the endearingly clumsy dance as the socially inept Chuck tries to win the love of emotionally-abused Fran — and perhaps find his ethics.

Promises Promises cannot be modernized, and Stage Door’s crew has recreated the era from the go-go dancing to the Mad Men wardrobe to the execs’ attitudes toward women as disposable sexual objects.

Peterson, who looks like a cross between Matt Damon in nerd mode and film actor Peter MacNicol, sounds more like a tenor and gives Chuck a lighter tone than perhaps the part calls for. But he does have the essential innate puppy-dog likeability and ebullience to keep the audience from being repulsed by Chuck’s opportunistic ambitions. Peterson’s Chuck has thoroughly rationalized the repugnance of what he is doing until it comes back to bite him hard. 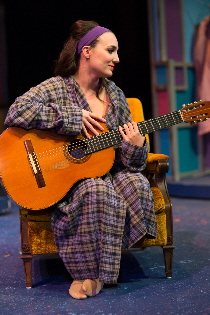 Sanford is a fast-rising young lead actress in the region. A relatively recent grad of New World School of the Arts, she garnered instant theater cred two seasons back as the teenager in Zoetic Stage’s Fear Up Harsh, half of the title duo in Slow Burn Theatre Company’s Bonnie and Clyde and the same troupe’s 25th Annual Putnam County Spelling Bee. Her Fran is endearing, lovely, vulnerable and impossible not to fall in love with. Her sweet singing voice and her ability to project Fran’s inner angst is well-suited to the Bacharach’s ballads such as “I’ll Never Fall In Love Again” and “Knowing When To Leave.”

Skiba inhabits the slick blithely immoral Sheldrake with Arrow Shirt features and a velvet voice that sounds like he could be selling unfiltered cigarettes on television.

Thanks to Larsen, much of the cast skillfully negotiate Bacharach’s notoriously mercurial time signatures that change in mid-verse. But many of them don’t quite deliver Simon’s brilliant classic comedy with enough topspin to make the lines land, at least with the sleepy Wednesday matinee audience. Only Bob Levitt as Chuck’s next door neighbor, a doctor bemused by all the sex going on next door, and Ashley Rubin as the barfly Marge really understand the vaudeville-sitcom cadences that Simon was so skilled at creating.

Rubin, in fact, gives the best comic performance as the inebriated barfly looking for a quick hookup with Chuck who is drowning his romantic sorrows in a bottle. A tandem creation of Rubin and Leeds, Marge’s voracious sexual raptor barely conceals a profound loneliness. The scene-stealing role won Miamian Katie Finneran a Tony Award for the 2010 revival.

Leeds, one of the best directors in town, does a solid job with the material, although the show would benefit from just a bit more arsenic baked into the warm tollhouse cookie.

A major asset is Black’s choreography, much of it recreating the ponytail-whipping posterior-gyrating frugs that fall somewhere between Dean Martin’s Golddiggers and Hullabaloo. It reaches its apex in “Turkey Lurkey Time,” a drunken sexually-charged entertainment number performed at the office Christmas party by three secretaries played here with appropriate abandon by Cara McMorrow, Shenise Nunez and, in a role that Donna McKechnie made famous, the vivacious Kayley Stevens. Stevens was to head Stage Door’s A Chorus Line as Cassie last season until she injured herself. Her kinetic sexuality here is another highlight of the production. With a few exceptions, the other dancers are not as crisp in their execution as you’d hope, but most are energetic and their faces exude a vital joy in performing.

Set designer Michael McClain has created a kind of Groovyland with silver squares outlining a playground colored with mauve, peach and other hues whose precise shades here are not found in nature, but are exemplary of the ‘60s. He and Leeds keep the show’s momentum reasonably steady by having most of the set pieces like desks and walls slide in on rollers.

Some context: Promises’ evolution provides some insight into the piece. It started out as an original screenplay by Billy Wilder and I.A.L. Diamond for their brilliant satirical film in 1960, The Apartment, starring everyschlub Jack Lemmon and Shirley MacLaine as the kooky heroine. It was, for its time, a jet black wicked satire of compromised morality in an era when the depicted sins were perfectly acceptable among many in the audience.

A few years later, producer David Merrick hired Simon, who was penning carefully-crafted books for musicals as he had for his famous comedies; Robert Moore, a skilled director; soon-to-be legendary choreographer Michael Bennett, and the top-of-the-pop-charts songwriting team of Bacharach and David.

This marked the songwriting pair’s first and last musical because Burt reportedly did not enjoy the process or relate to the art form. But the duo, whose sui generis hip urban cool aesthetic has never been replicated, produced this quirky score, which remains one of the best of the period both musically and for how it advances the plot and reveals character.

The musical was a gentler version of the film but the hero was played on stage by Jerry Orbach who melded a lovable hangdog appeal with an acerbic pragmatic big city attitude. The heroine was played by the little known Jill O’Hara who had a Village hippie feel to her, but she also brought the sense of someone with a tough street-smart shell protecting a wounded emotional interior. Both had enough of an edge so that you didn’t feel the actors or the creative staff were unfairly pandering for your affection.

Then came the 2010 revival with sweethearts Sean Hayes and Kristin Chenoweth, who have photographs in the dictionary next to the word adorable. To bolster Chenoweth’s slighter role, they even inserted Bacharach-David hits “I Say A Little Prayer” and “A House Is Not A Home.” Somewhere along the way, in part due to the casting of these two lovable and bankable folks, the show’s edge evaporated. Billy Wilder made “comedies” that featured genuine sentiment poorly concealed, intentionally so, with a slick almost nasty cynicism about human frailty. That’s absent here.

If you’ve seen the movie, you’ll get this. The last line of the film is Fran responding to Chuck’s declaration of love, pretending to ignore his ardor, but knowing that Chuck knows she feels the same. She says tartly, “Shut up and deal.” In the stage revival, she says sweetly with no edge, “Shut up and play cards.” It’s hard to explain but the difference between the works is right there.

Alongside The Fantasticks in the adjacent theater and recent productions such A Chorus Line, Promises, Promises is proof that Broward Stage Door is ramping up the quality of its productions.

To see a slideshow of photos from the production, click here. 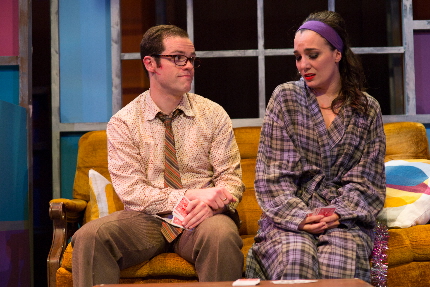