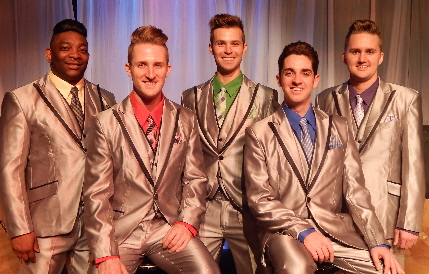 Pompadour, the new musical subtitled Hits, Harmony and Hairspray bowing at Broward Stage Door, is what it is and is what it wants to be. So the question that only you can answer is whether it’s what you want to see.

Precisely like 2014’s What’s New Pussycat show created by much of the same team, Pompadour is a light-hearted unabashed cruise ship-style jukebox revue with no narrative, only a romp through more than 65 pop music hits drawn from the 1950s and 1960s in about two hours including intermission.

The numbers are delivered in quick succession by a quintet of relatively talented singer-dancers whose parents were in diapers when these songs dominated the airwaves.

In theory, the connective criterion is “songs by singers who wore a pompadour.” This may or may not be technically accurate, but it’s used as an umbrella to encompass a wide, a debatably very wide range of talents and genres including Frank Sinatra, Johnny Cash, The Drifters, Ricky Martin, The Supremes and, really, Gladys Knight and the Pips. The huge eclectic playlist ranges from “Volare” to “My Name Is Sue” to “Jailhouse Rock” to “Love Potion #9.” That pretty much explains it.

The effort is the brainchild of director-conceiver Michael Leeds, a much respected director who was Tony-nominated for a similar songbook musical Swinging On A Star, and choreographer / co-director / costume designer / projections designer / frequent helmer of local musicals and veteran producer of numerous cruise ship spectaculars Kevin Black.

The show is broken up into seven themed segments entitled: The Rockers, Idol Worship –Teen Idols, He Ain’t Heavy- Band of Brothers (groups like The Righteous Brothers and The Isley Brothers), Muy Caliente!- Latin Lovers, Locked Up – The Good Ol’ Boys, Unforgettable – The Crooners, and Chart Toppers – The Groups.

The basic idea of a straight-ahead revue of pop tunes may not sound too exciting anymore given the emergence of songbook musicals with a story like Jersey Boys, Motown and Beautiful. But Leeds and Black surprised a lot of skeptics in the summer of 2014 with that effective What’s New Pussycat. Those who went in with low expectations left hoping no one caught them dancing in the aisles and audibly singing along. Even with digital musical tracks, the undertaking was a polished, well-executed evening staffed with some of the better voices in the region including Shane Tanner, Clay Cartland, Leah Sessa and Mike Westrich,

The structure here is the same: one performer starts to sing a solo, then another verse is taken over by a colleague, perhaps they join in a duet, then everyone joins in, often with tight harmonies.

One difference is Pussycat sidestepped a homogenized feel and injected some considerable emotion and a bit of humor in heavily reworked standards. But this time the quintet of young men doesn’t generate any electricity and or much passion at all. Most have strong voices, but these are singing performers not singing actors. That leaves you with a pleasant evening but not much that sticks to your ribs.

It does not start promisingly. Four fresh-faced white bread guys who look like they just graduated from college or the chorus of The Book of Mormon and one slightly older black guy open the show with, I’m not making this up, James Brown’s “Papa’s Got A Brand New Bag” and “I Feel Good.” It summoned up memories of the scene in Dreamgirls where a bunch of Pat Boone types sing a homogenized version of Curtis’ “Cadillac Car.”

But it catches some fire when they pull out a live piano and saxophone for a medley of Jerry Lee Lewis’ “Great Balls of Fire,” “Whole Lot of Shakin’ Going On” plus Little Richard’s ‘Tutti Frutti” and “Johnny B. Goode.” Later they seem comfortable sitting around a piano in tuxes crooning “One For My Baby” and “The Lady Is A Tramp,” but you almost cringe when they sing “I’m Gonna Make You Love Me,” which while it was covered by the Temptations, it is indelibly associated with Diana Ross & The Supremes. And then there is their admittedly tongue-in-cheek but lame impersonation of Gladys Knight and The Pips.

Some of the cast misses notes completely, some change notes in the melody that the composers never thought of.

And yet, they do have some vocal chops when a song falls solidly in their range and ability. Each of the five – Brandon Godfrey, Preston Grover, Anthony Massarotto, Stephen Millett and Jay Wilkinson – score on several numbers. They are notably effective on the rare occasions that they play on live instruments such as a piano, sax and acoustic guitars rather than accompany tracks that were arranged and orchestrated by musical director Manny Schvartzman.

From a directorial standpoint there is very little you can do with this material, although there is a cute bit in the first 30 seconds that we won’t spoil.

But Black and Leeds learned one crucial lesson from Pussycat: The finest moment in that show was a tight flawless a cappella harmony-enhanced six-part rendition of “Moon River” that was downright lovely. They and Schvartzman doubled down here with nearly as fine treatments of “Light My Fire” and, believe it or not, Johnny Cash’s “Ring of Fire.”

Similarly, everyone involved evocatively wove together inventive and affecting interlocking versions of “Up On The Roof” and “Under The Boardwalk.”

The most impressive aspect was the use of a stage-length LED screen with constant projections of artistic kaleidoscopic sequences designed by Black and animated musical interludes by Frank Hernandez/Atom Phly Media between segments. They set the mood and give the guys a chance to change costumes. Projections are just beginning to become more common in South Florida theater and the use of LED screens is quite rare, although it’s a standard technique on cruise ships.

The production doesn’t skimp on costumes either with each singer having a different (but color coordinated costume) outfit for each of the seven segments designed by Black and Peter Lovello.

This isn’t going to do much for some audiences, but will prove catnip for others. You decide.