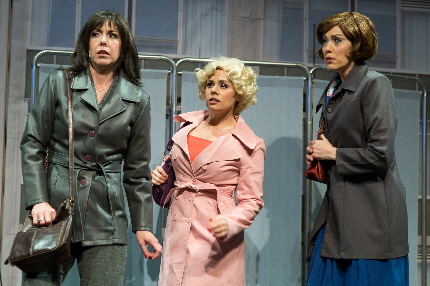 Sitting in Broward Stage Door’s mildly entertaining production, it’s futile to ask why anyone would invest millions of dollars creating 9 to 5 The Musical, based on 9 to 5 The Movie, which gave birth to 9 to 5 The Hit Song and 9 to 5 The Not-Such-A-Hit TV Series.

Focus instead on enjoying this undemanding cartoonish musical comedy that provides a pleasant way to pass an afternoon or evening. If that sounds like faint praise, well, that’s the caliber of material provided by composer Dolly Parton and bookwriter Patricia Resnick.

This production directed by Dan Kelley works thanks to amiable performers, a droll concept and a score that waxes between infectiously peppy to affectingly earnest if not especially profound. And it’s hard to fail with a peons-get-revenge-on-the-boss farce since almost everyone has worked for a jerk at some point.

Closely following the hilarious 1980 film co-written by Resnick, it tracks three put-upon secretaries working at a chauvinistic bureaucratic company. Violet (Katie Angell Thomas) is the widowed mother who is superbly competent and hopes for a promotion. Doralee (Jessica Crilley) is the Parton stand-in, a buxom blonde whose looks convince her colleagues that she is an incompetent, sleeping with the boss. Judy (Jennifer Hope) is a hapless naïf left by her husband for a younger woman and is now trying to settle in at her first job of any kind.

Their nemesis is the lecherous sleazebag boss Franklin Hart Jr. (Shane R. Tanner), who by his own admission is a “sexist, egotistical, lying, hypocritical bigot.” His bottomless oppression is abetted by the uptight office manager Roz (Cindy Pearce).

He passes over Violet for the well-deserved promotion, lies to the office that he’s sleeping with Doralee and upsets Judy by firing a colleague who was comparing unequal pay. So all will be the first suspects when Violet accidentally puts a non-lethal dose of rat poison in his coffee. To forestall him firing everyone, the trio kidnap him and hold him tied up in Violet’s garage until they can find evidence of his corrupt bookkeeping.

Underneath the farce are sledgehammer subtle messages of empowerment and self-respect that the cast somehow make ring true although the words sound as if they belong in a Lifetime made-for-TV movie.

The plot stops frequently so that one of the leads can sing a heartfelt power ballad about their hopes and dreams, or so the Dolly Parton character can get a twanging number designed to – but did not succeed in – making the country-western charts as another hit single. It’s then that the superfluousness of the music becomes clear.

The production really has only one home run moment: Jennifer Hope nails the rousing anthem “Get Out and Stay Out” in which Judy finds her backbone — and tosses out her abusive ex-husband. The lyrics sound like they were plagiarized from a greeting card, but Hope belts them out, powered by her character’s newly-discovered pride.

All three actresses have solid, expressive voices but their primary strength is exuding winning personalities. Tanner, who was the troubled crippled vet a few weeks ago in Zoetic Stage’s Fear Up Harsh, is delightfully and unredeemably sleazy here.

Kelley, who keeps the show moving nicely, embraces the 1980 time period that is lampooned in the 2008 script with references to such imminent developments as the state-of-the-art IBM Selectric typewriter and referencing the phrase “Just do it” as a “good idea for a slogan.”

The biggest problem was a sound system, which suffered from crackling, feedback and a serious balance problem that often resulted in the canned soundtrack drowning out Doralee and others.

To view a video of the productions, click here.