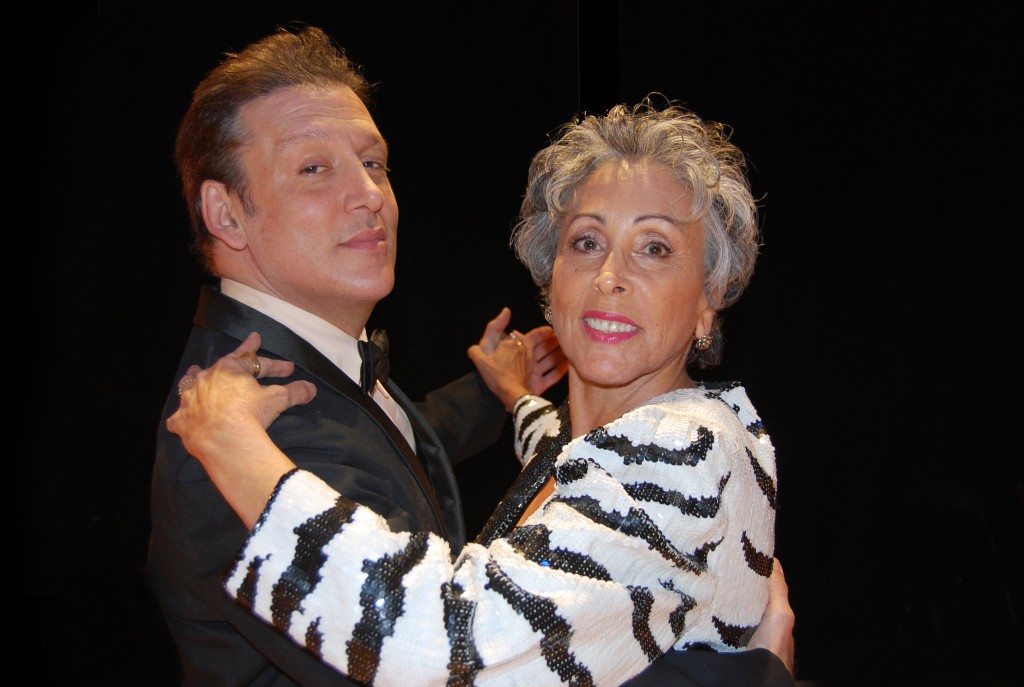 Six Dance Lessons in Six Weeks is a gentle message comedy about lonely people reaching out somewhat obliquely for human contact. But this occasionally charming pas de deux at Stage Door’s Miami Beach venue is thrown out of step because one partner is far more vibrant than the other.

As a result, there’s only chemistry between the two characters during the play’s one genuinely touching scene when they exchange their deepest secrets.

This unabashedly sentimental trifle tells of a flamboyantly gay dance instructor  Michael (Larry Buzzeo) who has been hired by Lily, a minister’s wife and former schoolteacher (Phyllis Spear), to teach her in the living room of her senior condo in St. Petersburg.

Michael has an uncensored acerbic mouth, a blue vocabulary and a cynical view on everything from leaving his career as a Broadway chorus boy for this “last notch on the Bible Belt” to dissing enduring love as a myth like Santa Claus.

Lily initially is a buttoned-down cold fish but she eventually proves she can toss a wisecrack back as well as he can. Predictably, this is a love story in the making as the two bit-by-bit share the sadnesses in their lives, inevitably unlocking their compassion.

The 2001 play by Tampa native Richard Alfieri has been mounted all over the world including a pre-Broadway run at the Coconut Grove Playhouse in 2003 with Mark Hamill and Rue McClanahan. Falling solidly in the early Neil Simon category, the play has thrived because of its enviable fiscal logistics of one-set, two-member cast plus it deals with the travails of two groups who love theater.  And once in a while, Alfieri surprises you with insights like Lily describing how widows suddenly become invisible to everyone around them when there’s no one holding their hand.

It’s also mildly funny with such lines as Lily’s “If you say your real age out loud, your face hears you” or Michael’s gibe at a loveless relationship “That’s what happens when you marry outside your gender.”

But it requires both actors invest the script with an extra level of energy and charisma for this to really have any electricity arcing on the stage. In this case, only Buzzeo delivers that. True, he has the showier role and he makes the most of it without going over the top. But Spear needs to dig a lot deeper into her inner curmudgeon and give Buzzeo a flintier, more vital force to work with. In fact, Buzzeo starts off strong, but eventually he needs an equal partner to feed his performance.

Director Dan Kelley brings out what he can in the script (he’d have made a perfect Michael a few years ago), but the only scene that really shines is in the confessional scene when the two characters admit their deepest tragedies.

Initially, it seems like a directorial mistake that the client clearly knows how to do every one of these dances, exactly how Fred and Ginger somehow knew each other’s moves telepathically the first time they met in every movie. But while it’s not handled well by the playwright, that actually is part of his point: She doesn’t need lessons in dancing; she wants human contact.

There’s a good deal of improbability in the script, starting with the fact that neither the teacher’s economic woes nor the client’s loneliness would be enough of a reason for these antagonistic types to stay in the same room long enough to develop any rapport after Michael calls Lily “a tight-assed old biddy.”

The set is pretty bland, but the costumes attributed to Suzanne Wilson (and we suspect the actors’ closets) are unusually evocative.

While this isn’t as strong as its last show Last of the Red Hot Lovers, hopefully Six Dance Lessons will start bringing in a steady audience for Stage Door’s new venue. For a region whose calendar was once dominated by light comedies, the number of professional troupes doing them now has dwindled.