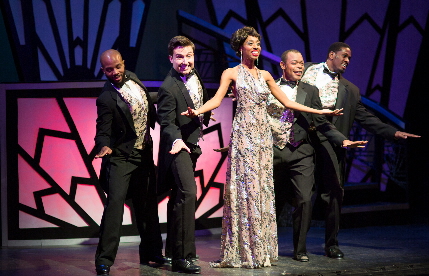 The swirl of tux n’ tails, the smoky-voiced chanteuse, the percussive tap, the syncopated scat, they are trappings of that era when the shared American daydream was of an elegance and elan that existed perhaps only in Fred Astaire movies.

Broward Stage Door’s production of Sophisticated Ladies resurrects a vibrant echo of that class and panache in their entertaining revue of Duke Ellington’s music.

If the show doesn’t quite sizzle and snap, a talented corps of 11 singer-dancers under Dan Kelley’s direction and Chrissi Ardito’s choreography suffuse the production with the sultry, sassy verve that defined floor shows in uptown clubs in the 1930s and ’40s. They sell 29 Ellington songs with the assured confidence that they have something substantial to market. With admirable energy and an indefatigable smile, they deliver this 1981 Broadway hit with grace and flair.

Something indefinable is missing, however. Maybe we’ve grown too jaded to embrace that ambience again; succeeding generations preen and pose and vogue in pointedly less refined ways. Maybe it’s nearly impossible for skilled performers whose parents weren’t born when these songs dominated the Hit Parade to find that smooth groove that celebrated style as an accessory like a diamond stud rather than worshipping style for its own soulless sake. No matter, the sold-out crowd of seniors Wednesday afternoon happily and successfully filled in that gap with their own memories.

Three of the performers seem to carry their own light along with them. The new face is Ziarra Washington, a reed-thin singer who Kelley wisely uses to open both acts. Standing in a slinky gown, her rich voice slides into such numbers as “In a Sentimental Mood” like melted chocolate poured hot from a fondue. In the style of the period’s torch singers, she delivers aching renditions of such standards as “I Got It Bad and That Ain’t Good.” She’s not really an actress and she invests just enough thespian topspin to avoid seeming like a statue. But her creamy expressive voice caresses everything from ballads to brass. 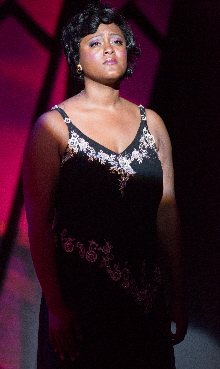 Another welcome newcomer is Stevanie Anita Williams who is blessed with a full but throaty timbre that nails Bill Strayhorn’s melancholy “Lush Life” and stays neck and neck with Washington in a medley duet that includes “Mood Indigo.”

If there is a standout, it’s Christopher George Patterson. You might not recall his name, but any veteran audience member of Stage Door shows will instantly recognize his beaming ebullience and polished tap dancing from Bubbling Brown Sugar, The Hot Mikado, Five Guys Named Moe and others. He exudes a dynamism on every number from “Don’t Get Around Much Anymore” to “I’m Beginning To See The Light.” He and Washington own the high moment of the show, a tongue-twisting scat version of “Take The ‘A’ Train.” 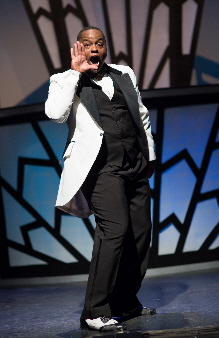 The rest of the cast has no trouble showing why they were hired. Stage Door stalwart Marcus Davis, who doubled as musical director, croons the title song. Brooke Martino amps up the heat with “Hit Me With a Hot Note and Watch Me Bounce,” which, in fact, she does. Clint J. Hromsco does justice to “Satin Doll.” Gregory Omar Osborne hasn’t quite got the voice, but he has more than enough terpsichorean charm to beguile the audience on “Caravan.” Courtney Blackmun, Walter P. Kemp II, Shenise Nunez and Karma Jenkins never let up the energy level in group numbers; they aren’t just window dressing but crucial elements of the production.

Ardito, an award-winning veteran at both Stage Door and Actors Playhouse in Coral Gables, does not work as much as she used to. So it’s good news to watch this troupe work through her wide repertoire from hard-driving tap to sandy soft shoe.

David Torres’ design of Art Deco panels flanked by twin curving staircases sets the tone instantly along with Ardean Landhuis’ lighting — although sometimes the spots and the actresses weren’t in the same part of the stage all the time.
.
Peter Lovello has produced a Project Runway of period wear that changes in every single scene including bowlers and vests, ebony tailcoats and white tuxes, clashing pinstripe sport jackets and brightly colored dress shirts, evening gowns that sparkle in the spotlights, coats with fur collars, party dresses adorned with spangles and bugle beads.  You will not see better in any production. It was so extensive that we initially assumed, incorrectly, that he simply pulled them from a costume house when in fact,. he designed and built several of them.

The big band sound is digitized, but former Floridian David Cohen has orchestrated and laid down lush tracks to provide the essential sound of a full orchestra.

In all, some numbers come across more crisply than other, some performers are better singers than dancers and visa versa. But sitting behind a heavenly white piano, Duke Ellington must be smiling approvingly along with the audience.

To see a short video by Geroge Wentzler, highlighting the dancing and costumes, click here. 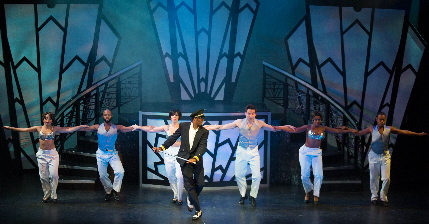