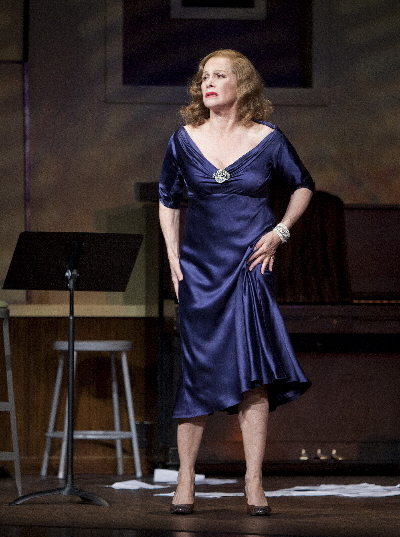 The proof that Stefanie Powers’ reincarnation of Tallulah Bankhead had thoroughly seduced the audience at the revival of Looped was not the waves of laughter at how adroitly she tossed off playwright Matthew Lombardo’s torrent of wry and wicked quips.

It was in the crystalline silence that embraced her sudden turns of introspection as Bankhead exposed the emotional pain that she masked with the outsized persona of heedless hedonism that eclipsed her real life.

This kick-off to a new national tour at the Parker Playhouse was supposed to star Valerie Harper who had played the part at the Cuillo Theatre in 2009 and then took it to Broadway. But when illness sidelined Harper, Powers stepped into rehearsals three weeks ago.

As good as Harper was in the part that she created, Powers brings a reality that amps up the pathos resulting from this peek inside the train wreck tragedy of Bankhead’s life. She’s a force of nature as she should be, but it’s a banked force of nature, eroded by time and tides of substance abuse anesthetizing her against early tragedies and later disappointments.

The play is a slightly fictionalized account of a real incident in 1965 when the fading star took hours to dub a single line to complete post-production on a cheesy British horror film, entitled in the United States, Die! Die! My Darling.

Bankhead, for the benighted, was a major star of stage and to some degree screen from the 1930s to the 1950s with such triumphs as Regina in The Little Foxes. But her considerable talent was eroded by an off-screen behavior that made Lindsay Lohan’s look stable, and she paid the price physically, mentally and emotionally. Eventually, the outlandish persona she constructed and cultivated as “a celebrity” swallowed whoever the real Tallulah Bankhead was.

At the start of Looped, she arrives hours late to a Los Angeles film studio, making an entrance swathed in an ankle-length mink and a cocktail dress, wearing dark glasses like she’s attending a premiere, throwing her head back and uttering the greeting, “F**k Los Angeles!”

Bankhead may not already be totally wasted on coke and alcohol this early in the day, but she seems permanently disoriented by decades of abuse. She is unable to keep the single line of dialogue in her head and constantly delays the looping by teasing the hapless film editor Danny Miller (Brian Hutchison) who has been left in charge of the session with a sound engineer (Matthew Montelongo).

Making up lost time with the bottle, pills and powder, Bankhead diverts the men from their task with a steady stream of snappy repartee spiced up with more F-bombs than an episode of Jersey Shore and more sex jokes than a celebrity roast.

Initially, Powers makes these quips seem like Bankhead’s normal mode of conversing with other people, but she and Lombardo eventually make clear that these are oft-employed witticisms that are part of her “act” – ammo in her arsenal for deflecting real life and meaningful human contact.

Over time, Danny becomes more than a straight man as Bankhead’s predilection for truth-telling noses out crippling deceptions in Danny’s life, ending in an Auntie Mame-like exhortation for him to live his life as fully as possible, consequences be damned.

The two actors and the roles are solid enough to be more than just a device to keep this from being a one-woman show like Lombardo’s Tea At Five about Katharine Hepburn.

That puts the burden on Powers who, despite having threaded theater through her career, is best known for her television roles like Jennifer in Hart to Hart. She is more than up to the challenge. The face, voice and mannerisms indelibly imprinted in popular culture virtually disappear in the Bankhead persona. It helps that as an ingénue Powers was, indeed, Bankhead’s co-star in that disaster of a film and they maintained an acquaintanceship in the two years before Bankhead died at 66 years old.  But Powers has adopted Bankhead’s oversized body language and especially the strained throaty gurgle of a voice delivered in a grand melodramatic manner that is recognizably Bankhead. You almost wonder whether Powers can keep that voice from tearing her own to shreds during the run.

More telling – and Lombardo has mentioned this in interviews – Harper crafted a fine performance; Powers is organically inhabiting the part. For someone with barely two weeks’ rehearsal, her fluid word play with Hutchison is flawless and her comic timing is absolutely perfect. She nails lines such as Bankhead describing her savoring the bucolic morning: “The sun was shining, the birds were singing, my pharmacist had delivered.”

But she invests Bankhead with an underlying gravitas even amid the jokes, evoking wounds without a shred of self-pity with lines like, “Darling, I can’t remember most of my life.” The loneliness seeps through quips like, “Most of the men I meet want to f**k me or be me,” referencing her promiscuity and her appeal as a gay icon.

The evening has been deftly helmed by director Rob Ruggiero who has been with project since Harper debuted it at the Pasadena Playhouse in 2008. His pacing is highly polished, especially given the short rehearsal time with a replacement star. While he is not a showy director, he often poses Bankhead with her head back a bit, chin up, staring out toward the audience like a noble figurehead on the prow of a ship plying the darkness.

Lombardo, a part-time Fort Lauderdale resident, has tweaked the script in ways that are undetectable. But somehow the show seems funnier, the exposition and backstory seem more smoothly woven in and the turn in tone from non-stop hilarity to seriousness seems less like a manipulative Lifetime movie than it did on its last visit to Florida.

Once again, while he has collected Bankhead’s famed bon mots and written her several of his own, it’s the quieter moments he has penned that touch the audience.

Most notable, one of those moments when Powers brings the audience to a church-like hush, is when Bankhead mercilessly lacerates herself by acting out one of her lowest moment. She turned down Tennessee Williams’ offer to create the part of Blanche DuBois in A Streetcar Named Desire because she felt it cut far too close to the bone and her reckless courage deserted her. A few years later, she played the part at the Coconut Grove Playhouse. But beset by doubt and egged on by the crowd opening night, she shamefully camped up what she knew was the finest opportunity of her career. Lombardo, Ruggiero and Powers make this humiliating surrender the turning point of both her life and the play.

In truth, by the way, she went on to do Blanche as intended and Williams – initially furious – wrote to The New York Times that her later performance was “probably the most heroic accomplishment in acting since Laurette Taylor.”

Several people have said that they aren’t interested in seeing the production because Harper isn’t in it, which is silly since Harper submerged herself in the role to the point that Rhoda Morgenstern disappeared. But they’re depriving themselves of perhaps an even more satisfying evening thanks to Powers’ fearless and skilled evocation of a human being committed to living life on her own terms come hell and high water.

This road show has a short one-week run before moving to Baltimore, Boston and Hartford, so pencil it in now.

In the “Will You Get That, Please” department: At least four cellphones went off in the first act, at least eight in the second act. Apparently the boors were waiting to hear whether someone found a match for their kidney transplant. Or maybe they were just too arrogant, selfish and thoughtless to turn them off.

3 Responses to Stefanie Powers Seduces Audience As Tallulah In Looped