Style And Script Clash Through Ground Up ‘s The Good Father 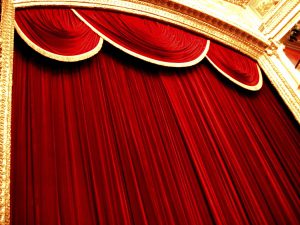 Since its return to regular summer programming in 2014, Miami’s Ground Up & Rising has been specializing in a particular strain of western theater: the austere, bone-scraping two- (or three-) hander, minimally produced and ferociously acted. Christian O’Reilly’s The Good Father, running in the company’s new home at South Miami-Dade Cultural Arts Center, bears the initial trappings of this style, and is anchored by GU&R’s expectedly Spartan production values.

But if it strikes the company’s followers as unsatisfyingly off-brand, it’s partly because O’Reilly is more charitable than truthful to his characters, a sentiment that can be at loggerheads with director Collin Carmouze’s bare-knuckle approach.

The Good Father opens on a rockin’ New Year’s Eve party, signified by a punk version of “Auld Lang Syne” piping from the stereo of a mostly emptied room. While joyful revelers fawn over baby pictures in an offstage kitchen, Tim (Carmouze) and Jane (Sarah McGregor) share in the meandering small talk of the unpartnered until Jane cuts to the chase: “What are you doing for sex tonight?,” a query posed with the cool indifference of a brunch invitation. It’s an offer a shy bloke like Tim can only rebuff so many times before temptation gives way to the most socially acceptable of hookups: the New Year’s Eve one-night stand.

A month later, the brief lovers meet again on a park bench, dressed for business this time, lit more harshly under the sun’s glare. Like too many guys, he said he’d call her, but he never did. They have seemingly little in common, quickly reduced to chatting about the weather.

It’s a fine scene, arguably the best acted in the show. Carmouze and McGregor are all averted eyes and nervous tics, overtalking one another as their characters traipse clumsily over linguistic landmines, he stammering his way through backhanded compliments, she countering them with brusque rejoinders. Eventually, Jane wends toward the purpose of their arranged meeting: She’s pregnant, and Tim’s the father.

It can’t be, he insists—and we find out why a scene later. Both characters are forced to process information that doesn’t compute, yet the evidence exists in her belly, prompting a romantic like Tim to believe that fate, or God, or the universe has conspired to produce a miracle. Shouldn’t they at least try to work it out as a couple?

Affable and relatable, Carmouze and McGregor effectively create two regular people caught in an irregular fluke of providence. And they’re easy to root for, particularly in Act One, before an emotional maelstrom batters their shaky foundation.

The second act is less successful, for reasons only partially under Ground Up & Rising’s control. The Good Father is predicated on a twist intended to shock but which many viewers will have forecast, moving toward a denouement too simple for the tangled emotions of the previous hour and a half.

And while both actors excel at awkward fumbling, they’re better lovers than fighters, as the torturous trials and revelations of Act Two fail to fully land. It doesn’t help that Carmouze, at the height of Tim’s pain and bluster, speaks at such a fast clip that his practiced Irish brogue becomes virtually unintelligible, removing us from his torment and the play in general.

These missteps might have been avoided had Carmouze not also directed the play, but his contributions behind the proverbial curtain include some effective touches. He stages The Good Father in a three-quarter round in the SMDCAC’s Lab Theatre, and there is no scenic design per se. Rather, the elements of a set—tables, chairs, benches, clothing racks—sit dormant behind the actors, covered and upturned, until Carmouze and McGregor remove and place them between scenes. After a furnishing is used, it’s discarded backstage, so that the space becomes gradually (and symbolically) barren.

The decision is budget-conscious but also artistic, as evidenced by a masterly decision, in the high point of Act Two, to wordlessly convey a tragic turn of events by transforming one object into another. Carmouze and McGregor’s sound design, however, leaves room for improvement. A well-chosen mix of pop songs (Social Distortion, Ben Folds, Barenaked Ladies, She & Him and other college mix-tape staples) summarize emotions between scenes, but a bit of ambient noise could have better placed the characters in the restaurants, pubs, parks and parties of their rendezvous; instead, every moment, with one exception, plays out in a void.

Deliberate or otherwise, this kind of formal abstraction creates a curious disconnect between source and production: O’Reilly’s play belongs to the tradition of sweet Irish theater that includes Outside Mullingar and Once, though it’s staged here with threadbare Beckettian existentialism. A harsh production of a flawed romance, this version of The Good Father is an admirable attempt to plunge for depth in an ultimately shallow pool.