Sumptuous, Entertaining Reboot Is Lovely But Not Rodgers & Hammerstein’s Cinderella

Posted on November 8, 2014 by Bill Hirschman 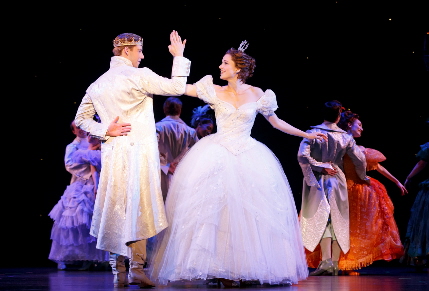 This is going to sound a little hifalutin’ for a musical theater review, but Goethe, author of Faust, once said, and we’re paraphrasing, “Don’t judge a show by what you want or expect it to be; figure out what the author wanted to do and then figure out how well he did it.”

So it’s undeniable that Rodgers + Hammerstein’s Cinderella is a lush, imaginative and polished production nearly guaranteed to delight audiences of all ages – really, toddlers in rarely-used Disney princess costumes to grandparents bemoaning the evaporation of “good ol’ theater.”

But this edition is awash in spectacle, soaring voices, stage magic, carefully-wrought but invisible theatrical craft in every discipline and most prominently, Beane’s very contemporary script festooned with enough arch jokes and current cultural references to keep the parents in the audience entertained. When Cinderella first meets Prince Topher (Prince Topher? Maybe better, Prince Keanu), sorry, when Ella first meets Topher, she says incredulously, “That was a world leader? He appears to have a heart, a mind and a soul!” Beane, to be fair, is a terrific playwright with a wonderfully wry sense of drollery, seen in plays like The Little Dog Laughed and most recently The Nance.

While the show shuttles between witty satire and unabashed romanticism, Beane and director Brokaw do a passable of job of preventing you from feeling like you are watching dueling shows. That’s because when they go for the romance, there’s no winking, no holding back. The elegant scene at the prince’s ball when Cinderella and Topher meet is, indeed, sumptuous in sets, costumes, lights, music, choreography and the emotion emanating from the characters.

Josh Rhodes’ original choreography is energetic and peppy enough in most places, but it becomes a dream in the swirling ball scenes. Kenneth Posner has evocatively lit Anna Louizos’ highly textured settings including a deep forest that could be used for the next production of Into The Woods.

Brokaw, who obviously deserves credit for much of the vision, has staged the entire evening with imagination and a smooth polish not often found in a road company.

Last but not least, the color-blind cast is as strong as you could ask for. Paige Faure, who just did a turn in the role on Broadway, is not just lovely but has a mezzo-soprano with a lower range that gives Ella a bit of heft and backbone as she grows into her confidence. Andy Jones is requisitely tall, blond and handsome with a flexible tenor, and a willingness to make Topher a bit callow with the need for some independent woman to help him grow up.

Side note: Whoever schedules the tour doesn’t know geography. The show plays Miami a week, then plays Charlotte, N.C., then West Palm, then Durham, N.C. 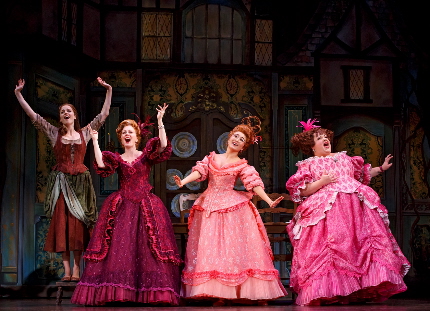