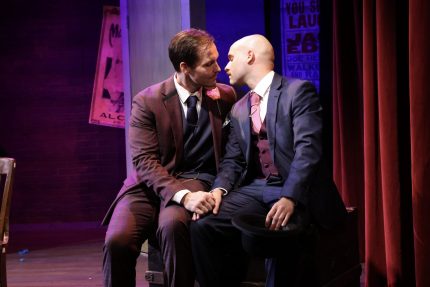 The Twentieth Century Way creates intersecting, interlocking and overlapping realities nesting inside each other like a Russian doll.

Or better yet: At least three, possibly four, even five realities swirl around and inside each other in constantly morphing patterns until the audience isn’t quite sure which is which or who is who.

One thing, and maybe only one thing, is certain in Island City Stage’s celebration of its 10th season by restaging its 2012 inaugural play —

This thought-provoker melds questions about people acknowledging their true identity. It  amalgamates the twin ideas of actors in general hiding behind their roles, and gay men hiding their sexuality from a homophobic society and from themselves as well.

At least, I think that’s it. Actors Clay Cartland and Alfonso Vieites, and director Michael Leeds, blend and magically evaporate the borders between those realities, sometimes repeatedly in a matter of seconds, never pausing in a complex tarantella of ideas, concepts, questions and sort-of-answers.

Indeed, as it was a decade ago, it’s not at all difficult to get a little lost in playwright Tom Jacobson’s thematically dense kaleidoscope of a script that never pauses for the audience to roll an idea around in their consciousness. It’s only the skill of Cartland, Vieites and Leeds at instantly inhabiting and then transforming through a dozen or more characters, accents, postures and attitudes that provides any hope of following everything that’s going on.

The premise is a play within a play within a play (with a fourth layer dropped in during the last minutes). Two present-day actors show up in an empty theater to audition for the film role about a 1914 con man. They have rented period costumes to impress the director who might just as well be named Godot. Waiting for the AWOL director, the flamboyant Mr. Warren (Cartland) challenges the younger less dynamic Method actor Mr. Brown (Vieites) to improvisations. The least successful one must leave the audition slot to the other.

Mr. Warren’s suggested scenario for the improvisation is for the two out-of-work actors to portray two out-of-work actors (also named Mr. Warren and Mr. Brown) hired by the City of Long Beach in 1914 to impersonate gay men as bait for one of the first organized stings of homosexuals on morals charges in the country —  a true but little known bit of history.

Jacobson’s tracing of this shameful episode provides a narrative through-line for the 90-minute show, which includes frank sexual discussions and nudity. But what he brilliantly explores is the muddy line between theatrical art and real life as Warren and Brown pinball among the present-day auditioners, the 1914 actors turned vice cops, and the faux characters that the vice cops play to entrap their prey, and their quarry — and still another layer.

What is reality; what is a role? Can an actor – by definition a dissembler – have true feelings? Can the dishonesty of acting pollute the integrity of being human? Where does the inner reality of the actor inform the duplicity of his performance – and visa versa?  On and on like a hall of mirrors.

Then infuse in all this the question of closeted sexuality, both in 1914 and 2021. Both the 2021 actors and the 1914 actors they are improvising claim not to be gay. But their behaviors belie that: Warren’s mannerisms when portraying their quarry are stereotypical over-the-top, and his disgust at their quarry seems “the lady doth protest too much.” Brown seems unusually compassionate about the lives that they are ruining.

The versatile Vieites and Cartland slip in and out of time periods, realities and especially a gallery of surprisingly distinct characters—sometimes just by putting on a hat, adopting a different accent and changing their mien.

Vieites, like his 2012 predecessor in the role, adopts a weak, awkward personality for Mr. Brown that makes you wonder why he was cast. But that’s the part as written because then Vieites inhabits a host of other distinct and vibrant characters.

Cartland is a veteran of broad portrayals in comedies and musicals – usually investing them with an underlying third dimension of humanity. He was made for this role in which the key is flair covering underlying currents. One moment, his 2021 actor might be impersonating a 1914 gruff cigar chomping newspaper editor whose fixation on eradicating homosexuals from the community may be hiding something else. Or the next second, he can become a hapless pitiful newcomer to town caught up in the sting.

Leeds, a skilled director at eliciting emotion and almost invisible staging, deftly moves everything along. He provides ingenious grace notes like having one character change personas while walking behind the other character and emerging as someone else.

But here’s the you might love it or not-be-so-crazy-about-it aspect of the script: Audience members are likely to feel like they are being twirled around unrelentingly on one of those playground mini-merry-go-rounds that try to toss you off with centrifugal force. It’s exciting, but paradoxically, after a while it can get tiring when you have trouble getting your footing for more than a minute or even a few seconds. Some folks are just going to give up and check out.

Praise is due Ardean Landhuis whose lighting helps underline changes in realities. Equal kudos are due his evocation of a classic brickwalled backstage under a proscenium between productions with a rack of costumes, a stage trunk and some posters from the early 20th century plastered on the walls.

This play was the inauguration of this company as a theater dedicated to gay-centric material. The 2012 version was done with the cooperation of and presented in the tiny Empire Stage starring Cartland and Mike Westrich with Leeds directing.

Since then, Island City Stage has grown steadily, moving to its own space in Wilton Manors. Some of its 49 other productions have won Carbonell Awards and nominations including Timekeepers and Daniel’s Husband.

The Twentieth Century Way plays through Oct. 31, produced by Island City Stage, 2304 N. Dixie Highway in Wilton Manors; 8 p.m. Thursday-Saturday, 5 p.m. Sunday. Tickets $35 plus processing fee. Call (954) 928-9800 or islandcitystage.org. (Do not park at the storefronts across the street.)

COVID protocols: Masks required inside the auditorium. All ticket requests result in a mandatory online health questionnaire to be returned before the ticket will be issued.