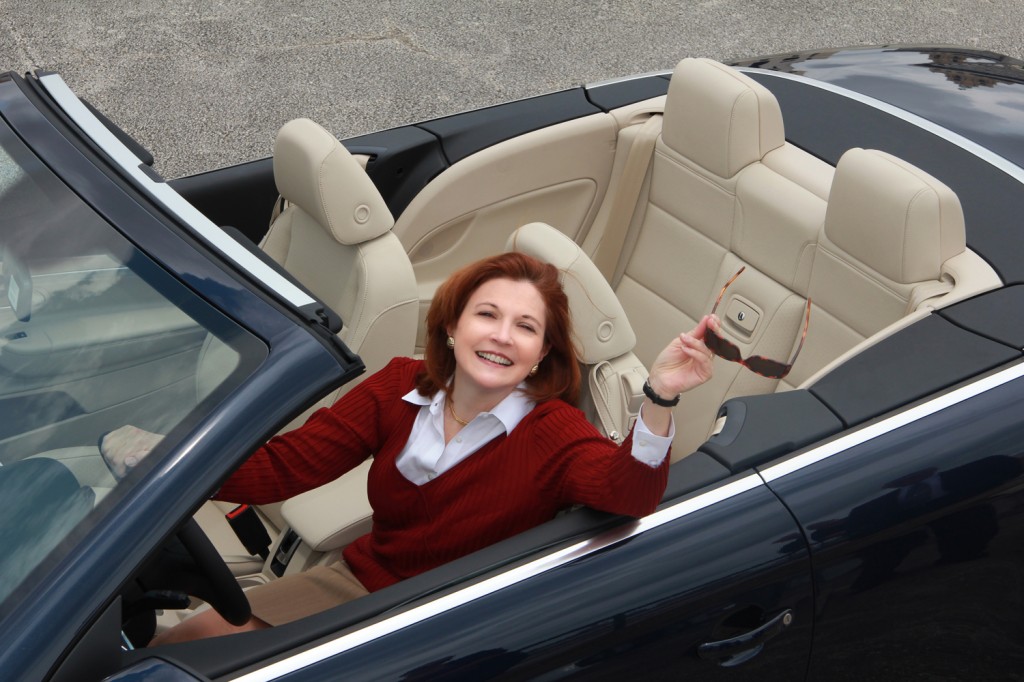 There’s a marvelous moment in Becky’s New Car when the accelerating farce of mistaken assumptions and white lies suddenly swerves smack into the territory of serious consequences.

Even though you and the heroine knew a painful collision was inevitable, the laughs have been so plentiful that the sobering reality comes as a mild shock.

Steven Dietz’s play at Actors Playhouse presents a mildly dissatisfied suburban Everywoman, barely aware she is ripe for a mid-life crisis, who is suddenly faced with an opportunity to lead a double life.

What she expects to be a brief taste of a fantasy – like Cinderella planning a single appearance at the Prince’s ball before returning to the scullery – becomes a seductive spiral that leads to hard lessons about choices.

Dietz’s insightful script, David Arisco’s assured direction and a deceptively deft cast led by the ever-engaging Laura Turnbull as Becky deliver a thoroughly entertaining comedy that will give your mind something substantial to mull over long after the house lights come on.

Becky Foster is a smart, articulate 21st Century woman working as an office manager/title clerk at a car dealership and smoothly running a household for her husband of 28 years, Joe (Ken Clement), and her son Chris (Ryan Didato), a psychology grad student living at home.

Working alone late one night, Becky is approached by Walter (Allan Baker), an affable if daffy widower who wants to buy nine cars as thank you presents to the employees of his outdoor advertising firm. Walter is amazingly rich, infectiously endearing and emotionally at sea as he continues to mourn the death of his wife.

He misunderstands one thing Becky says and assumes that she, too, is a lonely widow. Although she tries to correct the impression, she never manages to get the truth out as he impulsively invites her to become friends and then more than friends.

Dietz deftly sets up the proverbial slippery slope as Becky gets drawn deeper into an ever-more hectic juggling act. In this corner is her real life with Joe, Chris and the neurotic colleague at work (Francisco “Pancho” Padura). In the other corner is Walter’s Neverland estate with his lovely daughter Kenni (Anne Chamberlain) and a down-on-her-luck heiress (Kim Ostrenko).

Since this is farce, Dietz’s ensuing string of complicating coincidences never seem too preposterous, just hilarious, as the two lives careen toward each other like Keystone Kops cars headed for a collision. And then suddenly, it’s not so damn funny.

Arisco is perfectly at home helming this mixture of gentle comedy and modern angst. He keeps the evening moving smoothly and unerringly toward the quickening climax and the honest aftermath in the morning light.

He revels in Dietz’s erasure of the fourth wall by having Becky talk to us as a narrator as if we were just sitting in her living room for a cup of coffee while she cleans up after her family. Arisco and Dietz have Becky interact with folks in the front row, asking them to pitch in to put a bucket under a roof leak and help her collate some paperwork. The only time the technique felt forced was when Becky brings audience members on stage to help her change clothes.

As far as the cast, once again, Turnbull is so bloody good that only her colleagues will appreciate how her seemingly naturalistic style hides so much craft that the result borders on alchemy. Her Becky is so immensely likeable that we happily ignore the fact that she’s flirting with being unfaithful. Turnbull has earned praise for her scathing dramatic turns in Actors Playhouse’s August: Osage County last season and Palm Beach Dramaworks’ The Effect of Gamma Rays… this season. So it’s easy to forget how skilled a comedienne she can be, blessed with flawless technique.

Double that praise for Clement’s portrayal of the steadfastly decent blue-collar husband. Under Arisco’s direction, he exhibits superb comic timing and a deadpan delivery that can wring a laugh out of almost any line he chooses. But belying that doughy clown’s face, his real achievement is communicating Joe’s pain underneath his facile quips and stoic expression.  Once we stop laughing in the last 15 minutes, it’s Clement who brings the betrayal and its price tag on the whole family back into focus.

Baker, seen here primarily in those light summer revues favored by the Playhouse, creates a delightfully idiosyncratic multi-millionaire who you want to protect from the vagaries of the cruel world.

The rest of the cast is just as solid: Playhouse veteran Padura gets to veer out of control in silly rants, Didato (fresh off Brooklyn Boy) convincingly exudes that unwarranted condescension that young adults feel toward their parents. Ostrenko renders a portrait of a rue-filled Scarlett O’Hara puzzling out a life after Tara. And Chamberlain (who triumphed last month, ironically, as Cinderella in Into the Woods) invests Walter’s daughter with warmth and intelligence.

Dietz, a resident of Seattle and Austin, is one of the most-frequently produced playwrights in regional theater, whose Yankee Tavern debuted  at Florida Stage in 2009.

A bit of backstory: This is the 12th production of Dietz’s 2008 play slated around the country this season; the total tops 50 productions in regional theaters and college campuses, according to Charles Staadecker. The real estate broker should know. He commissioned the play as a present for his wife’s 60th birthday and together they have attended opening nights at 24 of them – including the one Friday at Actors Playhouse.

Staadecker and his wife, Benita, who sat on the board for ACT Theater in Seattle which premiered the work, travel the country proselytizing that theater lovers with the means should encourage new works by commissioning plays as gifts.

“I’m a good salesman,” Charles said in the lobby before the show began. He’s been pretty persuasive. Working since then with ACT to create the New Works for the American Stage program to match patrons to playwrights, their efforts have led to 19 commissions.

“You don’t have to be a Vanderbilt or a Medici to do this. We’re just hard working people. Instead of taking a trip to Europe, we do this, make something that leaves a legacy and makes a difference,” Staadecker said.

They are currently banding with friends to split up the estimated $25,000 cost of commissioning another new play. Sharing the burden costs each backer about $3,000 a year for two years or $250 a month – less than the cost of leasing a car, he said with a salesman’s smile.