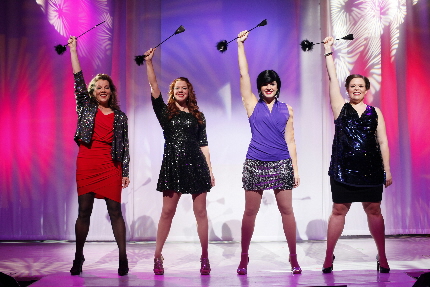 The cast of The D*Word raise a sex toy in triumph at the finale.

A sisterhood of four heroines schmooze, commiserate and support each other through fresh relationship traumas with an optimistic eye toward building a new fulfilling life.

Jeanie Linders, the creator of the phenomenally successful Menopause the Musical, hopes to strike gold again with another collection of classic pop songs threaded through a paper-thin story.

It’s easy to be snarky about this self-consciously manufactured mélange of a Lifetime movie, Harlequin romance, Mamma Mia sing-along and, above all, the racy banter of Sex in the City. (I can’t be the first to think of calling this Pre-Menopausal the Musical).

But if you can ignore feeling manipulated and drowned with regurgitated maxims from self-help books, the darn thing certainly succeeds in its goal of being a pleasant, diverting girls’ night out with its share of chuckles, guffaws and that satisfying feeling that someone out there knows exactly how you feel. With the aid of a few shakers filled with clear liquid before the curtain, it can easily become a party musical that will end with the audience hooting their support for their on-stage surrogates and clapping along with the upbeat numbers.

Linders reportedly takes a bit of umbrage to comparing The D*Word with Menopause which is playing somewhere on the globe at this very second. In that one, a group of four women sing parody lyrics set to recognizable tunes about the woes facing the modern woman. The D*Word has four women singing recognizable songs with the original lyrics about the woes facing the modern woman. To be fair, The D*Word does have a whiff of a story which Menopause didn’t bother with and Linders has created actual book scenes.

For 90 minutes, we watch four disparate women bond after each has been abandoned by a husband or boyfriend following a long-term relationship. Each learns to forge a new life out of newly-acquired self-respect. Each discovers that they don’t need a partner to be a worthwhile human being, although there’s nothing wrong with wanting a relationship. And the relationship can be just for the sex. As one woman says, “I’m not looking for happily ever after, just happily even after.”

And if all else fails, there are always the sex toys that one of the women hawks like a Mary Kay saleswoman.

Each scene of bar-hopping, wine sipping on the couch and kvetching ends with an iconic pop number whose titles say everything you need to know: “I Will Survive,” “Love Hurts” followed immediately by “You Can’t Hurry Love,” “I Wanna Dance With Somebody,” “You Don’t Own Me,” “It’s My Turn” and “What Doesn’t Kill You Makes You Stronger.” You can predict the lead-in scene to each number before you come to the theater. In fact, part of the fun is knowing what song is just over the horizon. When the women daydream about wanting a true Man to appear on the dating scene, you just know they’re going to sing “Holding Out For A Hero.”

What makes The D*Word work in performance is not the material as much as its delivery from a quartet of winning, hard-working actresses with Cosmo-smooth voices (the drink not the magazine) under the direction of Mayme Paul. Admirably and wisely, the production has cast actresses who are all attractive, but who don’t look anything like a twenty-something fashion toothpick on Project Runway or a jaded cougar on The Real Housewives of Whatever County.

Leading the pack is Angie McKnight as Erica, the “older” professional powerbroker who, after 25 years as a divorcee with 14 years of celibacy, now wants to risk a relationship just to “see if the plumbing works.”  McKnight has the most pizzazz of the group and a clarion voice that makes these pop standards her own.

Close behind is Maddie Casto as DeeDee, whose husband has left her for a younger woman, left her with two grown children and a teen still at home. Casto, a sort of svelter Melissa McCarthy with a toothy grin, puts across the wounded ego that evolves into a sense of self-determination. Casto has the best comic chops and timing as seen in her hilarious preparations to go on the first date in a quarter-century while signing “Hot Stuff” wearing a Jessica Simpson wig.

Laura Wright is Kate, the younger woman whose biological clock is deafening as she seeks not a relationship but “a sperm donor.” So when she is surprised by love, Wright’s Kate belts out “Like A Virgin.”

Sarah Hester Ross is a twenty-something whose 6 ½–year engagement ended when her beau dropped her for another man. Ross nails “You’re No Good” and “The Way of Love.” We have to note that her program bio notes that she “can be seen in The Bride of Frankenstein at Universal Studios.”

The music may be piped in from a CD player, but the new orchestrations give each number a surprising freshness, so this doesn’t feel like ladies night at a karaoke bar. The staging and dance moves by Paul are a hybrid of disco, a Vegas lounge act and Motown, but the actresses execute them with energy.

The entire evening has a slightly homogenized feel to it despite the copious sex jokes. Virtually every group number ends with the ladies collapsing on each other in gales of manufactured laughter familiar from TV sitcoms.

If the company keeps this talented cast on its future stops, word of mouth may well build this into a Menopause-type hit playing in Indianapolis and Indonesia.

Side note: Linders and her production company now know the ropes of making money on a show including what producers called “earned revenue,” meaning income from something other than tickets. A kiosk in the lobby and the show’s website offer an original cast album, baseball caps in fashionable black and white, T-shirts, refrigerator magnets, tote bags, visors, travel mugs, nail files – all with the “It’s All About Me!” slogan, and, yes, all of the sex toys hat DeeDee hawks to her pals. So if you’re running low on a vibrating lipstick container or chocolate to melt in a fondue and apply to various body parts, you’re in luck. Just be warned about those panties: Be careful where you put the remote control.

The D*Word plays through Dec. 8 at the Rinker Playhouse at the Kravis Center for the Performing Arts, 701 Okeechobee Boulevard, West Palm Beach. Performances 7:30 p.m. Wednesday-Saturday, 1:30 p.m. on Wednesday, Saturday and Sunday. Runs 90 minutes with no intermission.  Tickets $44. Visit http://www.kravis.org or call(561) 832-7469.

This entry was posted in Performances, Reviews and tagged Jeanie Linders, The D*Word. Bookmark the permalink.