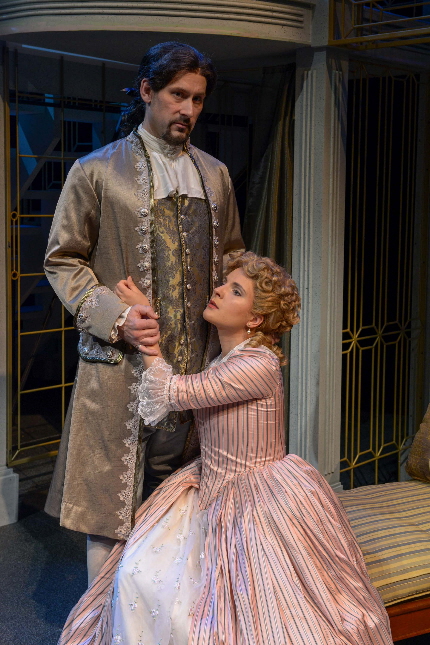 We like to think that in our cynical post-modern world that it’s liberating and downright fun watching fictional stories on television or film depicting immoral people scheming their way to fame, profit and power unbridled by anything so prosaic as morality, conscience or compassion. For instance, House of Cards.

But when it’s done well, the stunningly astringent Les Liaisons Dangereuses is an increasingly horrifying descent into an aristocratic society so morally bankrupt, so disconnected from their own humanity that they were doomed to extinction in the French Revolution only a few years ahead. Its manipulative monsters dismissively use love, honor and virtue as tools in their repeated quests to destroy the lives of those who value those verities.

Palm Beach Dramaworks’ solidly executed and lushly produced edition comes very close to achieving that level, but it falls just a shade short of communicating the venality of curdled souls. They don’t quite get across that the central players are so toxic that ruining people is a pleasure more satisfying to them than sex, perhaps the only pleasure that can reach inside their barnacled cores.

Still, their actions scripted by Christopher Hampton are so reprehensible that director Lynnette Barkley and the jaded point-one-percenters inhabited by Kate Hampton and Jim Ballard have no trouble communicating that these folks harbor an interior like that of the painting of Dorian Gray.

Set in Paris salons and a country estate in the mid-1780s, the action focus on the schemes of the still handsome widow La Marquise de Merteuil (Hampton) and the infamous rake Le Vicomte de Valmont (Ballard). Bored and debauched, the former lovers take on a parade of partners partly for the physical pleasure, but usually to further plots to humiliate and ruin reputations for the sheer sadistic gratification in a rarefied world where scandal can have fatal fallout.

Valmont wants to rekindle with Merteuil what has been the most consuming passion of his life. She has no interest in that, but holding out hope to him is a weakness she can exploit to conquer her only worthy competitor on the human chess board. Smarter than anyone around her, she has spent her life revenging herself on a society that relegates her to second-class status, supposedly submissive to any male no matter how unworthy.

Valmont’s current target is the Le Presidente de Tourvel (Katie Fabel), a genuinely moral woman in the best sense, a seemingly incorruptible soul who is married and whose innate decency is an irresistible target for the depraved duo. For some social slight in the past from Madame de Volanges (Maribeth Graham), Merteuil wants Valmont to seduce Volanges’ 15-year-old daughter Cecile (Kelly Gibson) who is betrothed to an absent businessman but who is in love with her young music tutor Le Chevalier Dancency (Brian William Sheppard). These manipulations are observed with a jaundiced eye by Valmont’s wise elderly aunt Madame de Rosemonde (Harriet Oser).

All the seductions are successful, but nothing else works out as anyone planned, and some people realize they are not quite who they thought they were.

While the play inexorably slides toward tragedy, the sardonic drawing room banter is as wickedly witty or trenchant as anything by Oscar Wilde or Dorothy Parker. When someone speaks of falling in love, Merteuil snaps, “Love is something you use, not something you fall into like quicksand.”

Barkley is a veteran director and choreographer who worked extensively at Florida Stage and co-directed Exit The King with William Hayes for Dramaworks in 2013. She gives the entire evening a sense of circle and gliding.

Her pacing is probably just right in the scenes themselves. But the evening seems pokey because it always took a while for the turntable to slowly rotate to a new angle and a new scene. Barkley covers it up by having some connecting action occur to the side or having a character stand on a balcony staring out at the void. But it slows what is already an intentionally deliberative narrative metabolism.

She also has gotten some fine work from her cast. Creating a female Iago, Kate Hampton is wonderfully haughty with a fine acidic turn to dark honey phrases like “I was born to dominate your sex and avenge mine.” Her “nobility” keeps a tight rein on her emotions – assuming she has any — and she only allows them to slip out occasionally in an upturned lip or a flash of her electric eyes. Throughout, Hampton builds an imperious virtuoso of deceit and cruel betrayal. But she doesn’t quite put across that vampiric relishing of the misery she hopes to inflict.

Ballard, a Dramaworks’ veteran, also knows how to handle the author’s Byzantine pronouncements turning every homily inside pout in a verbal betrayal. Tall, handsome, smooth, Ballard creates a much more privileged libertine than he did last season as the romantic rogue in Tryst. Ballard, too, like Hampton, is not quite enough of a viper. But Ballard is a hoot suppressing a smug smirk as Valmont unreels his practiced charm on his intended conquests.

Fabel succeeds in the difficult task of making the upright Tourvel a three-dimensional creation of character who we sympathize with rather than deride.

Gibson convincingly plays an inexperienced dewy 15-year-old convent girl who happily luxuriates in sex once initiated. Oser, one of the best actresses in the region, is dead perfect as the survivor of a lifetime of such adventures. Sheppard is appropriately all immature instinct and emotion, hugging people in unbridled gratitude. His casting was an imaginative stroke because the actor is shorter than almost anyone else, notably Valmont and Merteiul, visually making his character a pawn completely out of his league.

The large cast include Dramaworks’ co-founder Nanique Gheridian as a lusty courtesan and Tangi Colombel as Valmont’s droll manservant. Nick Arenstein, Ashley Bourget and the ubiquitous Clay Cartland are servants.

What makes this a don’t miss evening for theater-lovers is the visual element. Dramaworks always excels at all the supporting disciplines, but it has outdone itself here. Brian O’Keefe designed and constructed (with helpers) many of the 26 sumptuous, gorgeous costumes of silk, taffeta, crinoline, corsets, waistcoats, bustles, ruffles, leather boots, tricorn hats and the like. The opening tableau of the show with all the characters appearing in their finery elicited applause from the opening night audience. Even the wigs by Omayra Diaz Rodriguez – usually the weakest aspect of any show involving hairpieces – were convincing.

Victor Becker designed and Jerold R. Forsyth lit the unique setting: a gilt-edged skeleton of huge airy windows, columns, metal scrollwork and a double staircase that turns in on itself like a M.C. Escher drawing. The central section with the staircases sit on a turntable that ushers in a new set of brocade upholstered furniture by implementing a half-turn or even just a sixth-turn to put it all on an angle.

A nod, too, toward Lee Soroko who stages one of the more convincing sword duels seen locally in some time.

To be fair, the original Howard Davies production in London with Alan Rickman and Lindsay Duncan in 1985 remains one of my best and most favorite theater experiences in a half-century of sitting in an audience. The production was moved to New York two years later, made into a movie with perfectly cast Glenn Close and a miscast John Malkovich, and revived on Broadway with Laura Linney in 2008.

A side note: There is a distinct but unfortunately unidentifiable sound at the very end of the play. Merteuil is playing cards with Aunt Rosemonde and Madame de Volanges. The eternally unperturbed Merteuil says idly, “I used to be afraid of growing old, but now I trust in God and accept. I dare say we would not be wrong to look forward to whatever the nineties may bring. Meanwhile, I suggest our best course is to continue with the game.”

That crashing sound that follows is the blade of the guillotine. 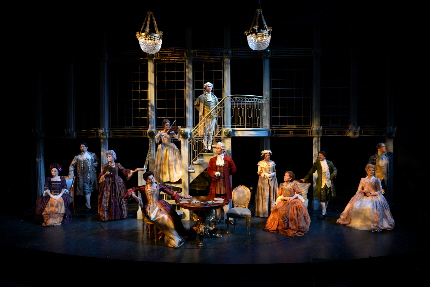