The Interview Is Even Better The Second Time Around 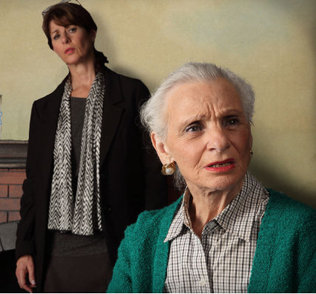 Four years ago, The Women’s Theatre Project mounted Faye Sholiton’s The Interview about the persisting damage that the Holocaust wreaked across generations and the efforts of two women to break that cycle on a very personal level.

An insightful script and a skilled cast delivered an affecting, thought-provoking evening in the company’s cramped theater in Fort Lauderdale’s warehouse district. So some may cluck their tongues that TWTP has revived The Interview this month for its second production in its new more luxurious home in a Boca Raton community center. Same three leads. Same director. Aside from some gender tweaks, same script.

But not the same show. No. As solid as the first production was, this edition is a significantly deeper, more moving rendition elevated by acting that has only become richer with time. Along with the company’s Eclipsed and Speaking Elephant, this likely stands among the company’s finest offerings.

And for the fourth time in 16 months, Harriet Oser gives a master class in performing, this time as an elderly survivor who has allowed anger and regret to poison not just her life but to infect their lives of her children.

Doubtless being Jewish and/or having a familial connection to the Holocaust triples the impact for some audiences, but anyone who has struggled with profound family baggage will plug into its themes.

Before the lights rise on the darkened set, a Yahrzeit candle burns –a memorial usually limited to the anniversary of a death. But Bracha Weissman has a lot of deaths to remember. Of 86 people in her extended family, she is one of only two to survive Hitler.

The suburban Ohio grandmother is the subject of a visit by middle-aged Ann Meshenberg (Patti Gardner), who emigrated with her parents, themselves Holocaust survivors from Poland. Ann is interviewing survivors on video for a project similar to Steven Spielberg’s Shoah initiative. She has come today to Bracha’s apartment to do the prep work, filling out a soulless form with perfunctory details. But she’s also there to soften the ground for the videotaping tomorrow.

“This will awaken a lot of memories,” Ann warns. Bracha replies with a steeliness that borders on contempt for the ignorant, “They were never asleep.”

Initially imperious and forbidding, Bracha is perfectly willing to discuss her experiences for the first time — not to purge the unpurgeable or seeking sympathy, but to ensure that people remember, especially her grandchildren. Ann wants Bracha to hold her stories for the taping, but Bracha heedlessly unreels harrowing tale after tale.

Life is curdled by anger, bile, regrets and guilt for Bracha, who acidly reminds Ann that her name is Hebrew for blessing. She bristles at outsiders’ admiration: “I stayed alive. There’s nothing to be proud of.” Yet her brusque, sharp manner retreats to reveal a  vulnerability when her mind summons back the specifics of her nightmare.

During the conversation, Bracha speaks to someone not in the room, initially making Ann wonder if Bracha is mentally sound. In fact, Bracha is continuing an imaginary argument with her estranged daughter, Rivka (Irene Adjan). The daughter moved to Los Angeles more than 12 years earlier and is raising two grandsons who Bracha has never seen. We can hear Rivka’s end of the argument and see her through a blurry translucent wall. Bracha’s willingness to discuss the Holocaust today with Ann and its fallout are really an opportunity to work through her deficiencies raising Rivka.

It emerges that Bracha rarely discussed the Holocaust in any detail while Rivka was growing up because of secrets that Bracha harbors. Now the picture of an elegant matron, Bracha was a mercilessly demanding mother unable to nurture her overachieving children. Arguing with Rivka’s criticism of Bracha’s maternal shortcomings, the woman admonishes her daughter, “You had a mother.”

That cutting remark exemplifies the other part of Bracha’s failing: While she would not volunteer details of the horror for her children, she injected it into every waking moment and every facet of their lives. She named Rivka for a sister who did not escape. When her children squabbled, Bracha would utter, “I survived the camps for this?” Rivka retorts that she spent her life in fear that Hitler was going to return for her and the rest of the family.

This reached a zenith when Rivka’s twins were born 12 years ago and she begged Bracha to help her. Bracha refused, fatalistically thinking – but not saying at the time – that “Death follows me.” Now, Bracha wants to rekindle the relationship but Rivka is balking, finally free of the baggage her mother loaded her with. “I think Hitler has claimed enough victims,” Rivka says, “He isn’t going to get me and he sure as hell isn’t going to get my kids.”

Ann has a hidden agenda as well. Her late mother – who grew up in the same region as Bracha — also passed on crippling guilt but refused to talk about her past. So both women are trying to work out a troubled mother-daughter relationship by substituting each other for the absent loved one – and in the process creating a new second chance relationship as well.

At its core, The Interview asks us to acknowledge our anger at what fate or God has dealt us and forgive ourselves for having those all-too-human reactions. Bracha, who has finally understood her child-rearing errors, tells Ann, “Every day they poisoned us, but you don’t have to swallow it and you don’t have to pass it on.”

This is not some Lifetime movie homily. This is a severely tested message forged out of unimaginable horror and seemingly indestructible resentment. In fact, while there is an emotional purging in the second act and lessons certainly are learned by both women, Sholiton has not wrapped everything up neatly. As Bracha yells at one point, “How do I convince you that there is no happy ending?”  Especially watch Bracha carefully in the final seconds of the play.

The part of a videographer who arrives late in the play initially was written for a callow young man, here played by Christopher Scott Mitchell. But it was rewritten for a young woman in TWTP’s first production because of its policy at the time of casting only women. The switch back to a male actor enables one heart-stopping moment restored to the script that involves a candy bar.

Sholiton’s play depicts complex and conflicting feelings for all three women as well as comprehensively examines the issues. Still, it’s not a perfect script. Some way too timely discoveries make the plot feel forced at times. Plus, Bracha’s dialogue with Rivka would not heal their actual relationship since Rivka is still in Los Angeles; further, Bracha is unlikely to understand Rivka’s side of the story so well to handle both sides of the debate in her mind. But this is theatrical license; go with it.

In less skilled hands, The Interview might come off as overwrought or mawkish. But director Genie Croft has once again guided the three fine actresses to bring a scale of restraint and therefore reality to these otherwise operatic emotions.
Oser has had a heck of a couple of seasons: her sage retired radical in Caldwell Theatre’s After The Revolution, the title character in Plaza Theatre’s Driving Miss Daisy, and our favorite, the dotty burned-out boarder in Palm Beach Dramaworks’ The Effect of Gamma Rays On Man-On-The-Moon Marigolds.

But Bracha is a far more complex character and Oser inhabits all of her colors: by turns, indestructible then fragile, off-putting then needy, thoughtful then cruel, altruistic then self-involved. All of this and more plays across Oser’s face with a crystalline clarity. Her voice is even more expressive – brittle and weak one moment, strong and cutlery sharp the next. Every facet is believable.

Gardner has the less showy role for much of the play as a character who initially seems like a typical suburban Everywoman next door.  But Gardner quietly, subtly lays emotional groundwork for what’s to come. When Sholiton allows Ann’s angst and guilt and issues to rise steadily like a column of lava in a volcano, Gardner’s outpourings are completely believable.

Adjan also does a fine job of communicating Rivka’s warring feelings for her mother, not just the underlying love, but her clear eyed need to put some distance between her and burden that Bracha has inflicted.

Any actor knows that a performance is often due in no small part to the vision and leadership of the director, so credit Artistic Director Croft with some measure of the three women’s triumph here. Croft does not allow a shred of whining or self-pity to infect anyone’s performance. While she allows the actresses to take pauses and let the piece breathe when necessary, The Interview never feels like its lagging.

Another plus of the new theatre home is the ability to have a real set. The ubiquitous Sean McClelland still doesn’t have a Maltz Jupiter Theatre budget to work with, but he has come up with some interesting ideas. To show the ever present memories, he has topped two sides of Bracha’s modern apartment with the infamous concentration camp sign, “Arbeit macht frei,” labor makes you free. The back wall is comprised of heavy plastic panels containing inmate numbers, a hazy barrier between Bracha and the embodiment of Rivka for much of the play.

Even if you saw it four years ago, this heart-rending rendition is worth a second visit.