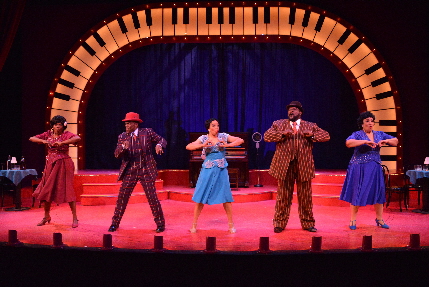 Something remarkable happened opening night when the band played the musical entr’acte to the second half of the Wick Theatre’s Ain’t Misbehavin’.

What had been a merely competent if unremarkable evening of entertainment – notably lacking much electricity – suddenly transformed. The joint, finally, was jumpin’ and it stayed that way much of the second half leading to a hand-clapping, crowd-pleasing finale.

Audience members at this last show in the Wick’s inaugural season stopped at the box office to buy season tickets for next year or add their name to the theater’s email list.

Even when the talented quintet crooning Fats Waller’s tunes about love and lust weren’t as thrilling in the first act, the entire production exuded a visual smoothness and assured polish thanks to the stylish work of director/choreographer Ron Hutchins (this season’s 42nd Street).

Perhaps that first act shortfall will evaporate as the run settles in. But one aspect that needed attention – again only in the first act – was that notes were regularly missed by some of the singers. Musical director Charles Creath needs to warm them up a little bit more.

Not that the cast lacked verve. Infectious joy beamed from the welcoming faces of Shirley Tripp, Debra Walton, Joy Lynn Jacobs, local veteran Reggie Whitehead (recently in Pippin and The Full Monty) and Phillip Boykin, a Tony nominee for Crown in The Gershwins’ Porgy and Bess.

They all connected solidly with this 1978 Tony-winner that gathered a broad range of Waller’s Tin Pan Alley music presented as if the audience was watching a Cotton Club revue between the wars. 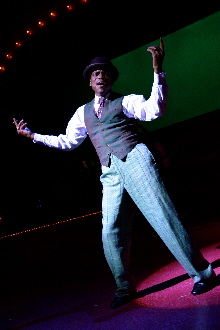 They sang trios, duets and en masse, including a deft chorale of the melancholy “Black and Blue.” But each had memorable solos in the spotlight. Whitehead, who has played the show before, once again nailed the undulating moves and evil grin while puffing on a reefer in the sensuous “The Viper’s Drag.”

Boykin moved his large frame with a sharp-edged grace, even laying his bulk on the top of a piano in sultry chanteuse poses. But it’s his bottom of the barrel baritone contrasting with glowing eyes and broad smile that captures the audience. He savors each slow syllable of “Honeysuckle Rose” as if sucking on a piece of hard candy.

Both men are especially effective as a double act, notably in the hilarious “Fat & Greasy,” which finally gets the audience revved up enough to join in the call-and-response.

Tripp evoked someone in love with a man who doesn’t deserve her in a moving edition of “Mean To Me.”

Walton often sang softly, making the audience wonder if she had much power, but when she sang “Keepin’ Out of Mischief Now,” her delicate phrasing finished up with a blast of sound that showed she had been intentionally modulating her volume.

Jacobs often infused broad eye-rolling humor in her numbers such as “When The Nylons Bloom Again.”

In addition to Hutchins, the other uniformly solid work belonged to the jam-tight band including Creath on a classic upright piano, Josh Allen on acoustic bass, Jeff Renza on drums, Tom McCormick on woodwinds, Jason Pyle on trombone and a first-rate Douglas Michaels on trumpet.

This, incidentally, marks the first time that a Wick production has used live music. Previously it controversially relied on canned music to provide the full sound that their titles seemed to require. The theater team hopes to change that next season by hiring musicians for most if not all productions. Toward that end, they plan over the summer to turn two underused enclosed VIP boxes at the back of the theater into a miked orchestra pit.

The costumes, presumably pulled for the company’s stock, are a witty evocation of the period, all sequins and pinstripes. Well-known set designer Sean McClelland who is on staff at the Wick created a vibrant cabaret environment featuring an arch made up of oversized piano keys that lit up in different configurations.

All the elements combine under Hutchins’ leadership in a pleasant enough evening of torchy solos, gliding dance steps and lowdown honky-tonk tunes.

Side note: The Wick will be donating a percentage of the May 29 evening performance to the family of Austin Hefferin, 21, who was recently diagnosed with a Glioma brain tumor. His condition is creating a financial crisis for his family. The Wick will also be collecting donations in the lobby as well. 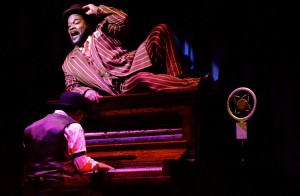