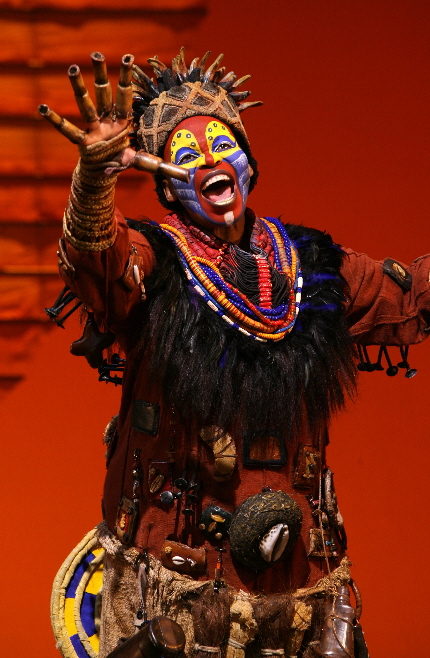 Calling out around the world…. Tshidi Mayne’s Rifiki gathers the animals to be dancin’ in the street in The Lion King national tour / Photo by Joan Marcus

For millennia, the tragedy of all theater as an art form was that it was ephemeral. Few people alive today saw Laurette Taylor’s legendary performance in The Glass Menagerie and even if they did, they cannot recreate for us the visceral experience of the moment.

When it’s filmed, most theater works lose 88 percent of its unique magic no matter how good the movie. As iconic as Marlon Brando was in the cinematic A Streetcar Named Desire, those who saw him on stage said the film version couldn’t compare with his electrifying presence in the theater.

But Disney, for all its theatrical sins, deserves credit for at least one benefit of its long, long, long-running Broadway shows and tours: You can see what your parents were talking about when they raved about the magic of some theatrical piece from back in the day.

Because as the current Broadway Across America visit of The Lion King to the Broward Center shows (and indeed Beauty and the Beast’s stop at the Arsht Center last month) Disney knows how to keep that magic alive.

The vibe may seem blunted for those hearing “Can You Feel The Love Tonight” on stage for the third or fourth time, but the quality of the material and the indefatigable commitment that the troupe devotes every night keeps this visit to the Pridelands as fresh as it was 18 years ago. (Do the production managers threaten the cast?)

This is not a given. Famously, the previous long run of Les Misérables in New York City became so noticeably stale and the cast so burned out that the producers replaced the entire company. And we’ve all seen tours whose tired performances reflect every mile sloughed on the road.

So that electrical buzz that you remember rising up your neck and into your temples at Rafiki’s clarion call and the parade of animals gathering at Pride Rock is still something breathtaking that you can share with your kids and grandkids without concern that you may be exposed as remembering it better than it was.

There are even a few contemporary references thrown in to the dialogue such as a nod to the song “Let It Go.”

What remains undimmed is the visual and aural banquet – an unparalleled achievement in mainstream theater melding music, voice, dance, movement, costumes, masks, lighting, scenic design, puppetry and several other disciplines into a unified and overwhelming theatrical whole, thanks to Julie Taymor who can be forgiven anything, even Spiderman: Will The Last Person Leaving Please Turn Out The Light, so long as she left behind this work.

Taylor’s genius is evident everywhere, but especially in the fusing of costumes and masks and puppetry, such as the lionesses’ garb that makes them animals with a human spirit.

A dozen other major talents share the honor including Garth Fagan’s choreography, which seems as exhilarating as the first time you saw it, and the score, especially Lebo M’s African-infused contributions. Elton John and Tim Rice’s pop tunes aren’t in the same class, but credit them with that peerless pulsating anthem “The Circle of Life.”

On re-re-re-rehearing, the almost mythologically schematic plot seems a little frayed and the consciously constructed morals-for-the-kiddies seems a little less subtle than it did when you were first dazzled by the sensory experience. But you also can appreciate now how bookwriters Roger Allers and Irene Mecchi threw in plenty of witty quips aimed directly at the adults escorting the younger theater patrons.

But the sheen that makes it still glow is delivered by this cast, many of whom who have played one or more roles in different companies. Every last one has not just expressive singing chops, but mellifluous and distinct speaking voices — starting with the outstanding performance of Patrick R. Brown’s Scar whose curdled spirit seems a cross between the manipulative Iago and the plummy Addison DeWitt.

L. Steven Taylor embodies strength and wisdom in a Mustafa who is the kind of father many folks dream of having or having had. His baritone intoning “They Live In You” is deeply stirring. Jordan A. Hall (alternating with Tre Jones) is a bundle of gleaming energy as Young Simba. Jami Remy makes a plausibly callow Simba who grows into his mantle. Tshedi Manye’s Rafiki is a delightful collection of cries, clicks and twitches. Drew Hirshfield’s Zazu, Ben Lipitz’s Pumba and understudy Tony Freeman’s Timon were classic vaudevillians.

Doubtless every movement is choreographed down to a flick of the wrist and every line scripted down to the seeming ad libs, but it seemed less frozen in place as it did in Beauty and the Beast.