The Phantom Of The Opera Sings Again At The Arsht 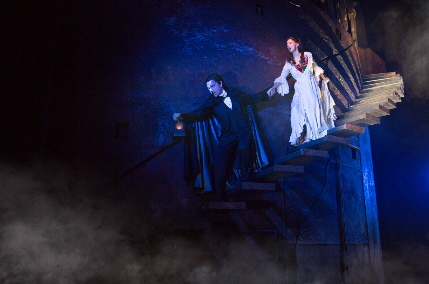 There’s something interesting about seeing at the Arsht Center the same national tour of a 30-year-old warhorse like The Phantom of the Opera for the who-knows-which time.

On one hand, the review you are about to read accurately reflects the show even though it is about 70 percent what we wrote when the same tour came to the Broward Center for the fifth time in November 2014.

On the other, it is amazing that people who have performed show three hundred times since then – including the three leads – have not lost their edge as even the best professionals do over time. Instead, they have discovered all the colors and nuances possible in the work, and deliver them with confidence and brio.

And it should be underscored that this production is a completely overhauled edition retaining virtually nothing but the original costume design. More on that later.

For all the derision and adoration that the basic material has engendered over three decades, this musical gliding over a fog-shrouded lake into the Arsht Center remains a sturdy craft buoyed by a soaring muscular score delivered by a talented crew.

Those who have seen the show before – this is at least the seventh visit of a national tour to the region but the first at the Arsht — will rightfully tick off what is and isn’t still there in director Laurence Connor’s revamp designed to simplify the logistics of moving the juggernaut between cities for short runs.

The chandelier is still there (and its speedier fall is scarier, but the candelabras rising from the fog are missing along with the grand staircase with its dummies for the ballroom scene.

The inventive scenery is markedly different but no less grand; the choreography has been inventively expanded; the atmospheric lighting is superb; the overall direction finds more depth than before, and the orchestra envelops the audience with such rapturously swelling and soaring sound. Well, maybe drown is a better verb thanks to the sound crew.

As a result, the production exudes a freshness that will surprise season ticket holders reluctant to see the show one more time. Imagine that a different production company took on the bare bones script. It’s the same property featuring most of the now iconic elements, but with a different take – albeit not a terribly different one. Connor and producer Cameron Mackintosh did precisely the same thing for the Les Misérables reboot that toured through Florida a year before going to Broadway.

All that said, the first rule of a professional magician is never perform the same trick twice for the same audience. So, as fine as the production is and as admirable as the cast may be, some of the magic has disappeared in the return. For instance, even though Christine and The Phantom are more physical here – he actually touches her a few times – the latent sexiness and even rapturous romance is AWOL. Because Macintosh has cast a young hunky Phantom (as they did in the 2004 film), the daddy issues that added a bit of frisson are also missing. In fact, returning audiences will feel something ineffable is missing this round.

This cast took over the week their roles after the production appeared at the Broward Center. So they have been at it about 15 months. But unlike the group they replaced, these folks are notably more vibrant and vital. They dig deeper into the parts than their predecessors with expressive voices that mine what few complexities exist in the piece.

Chris Mann is a pop recording artist and a finalist on the vocal competition television show, The Voice. Not a promising pedigree for a theater role as challenging as the Phantom. Well, toss away your preconceptions. Obviously, he has a fine unique voice that does not try to imitate anyone including the role’s originator Michael Crawford, comfortably hitting everything from the subterranean low notes to the near falsetto. But he is thoroughly acting the role with as much nuance as the flawed material provides. More than anyone in the cast, he alternates back of house belt with gentleness and vulnerability, notably on “Music of the Night” and “Point of No Return.” Even halfway back in the auditorium, audiences could feel the Phantom’s pain and charisma. His acting is far better than his predecessor on the tour, although once again, there’s not much mercurial menace, but no one, not even Crawford has ever exuded that.

Katie Travis’s Christine has that requisite voice to span power ballads and operatic trills. Her Christine does start off a bit of a dewy ingénue as she should, but she quickly develops a backbone and she becomes a more positive, self-possessed character. That may conflict a bit with the script but certainly makes her much more satisfying to spend time with. In the first scenes in the Phantom’s lair, she is fascinated by her first face-to-face interaction with her benevolent mentor and enamored of his genius, rather than acting like some terrified mouse. Her Christine comes into her own with a rendition of “Wishing You Were Somehow Here Again,” which in other hands feels like a whiny number. Here it is a dramatically justifiable and affecting piece as Christine’s innocence finally evaporates.

Praise too is due Storm Lineberger (what a name) in the eternally thankless role as the cartoon hero Raoul. His work on “All I Ask Of You” brings some honest romantic ardor to what can be a saccharine number.

The fine orchestra is a combination of five travelling musicians under the baton of Dale Rieling, plus 10 locals. Perhaps it’s that three of the slots are electronic keyboards that can imitate any other instruments, but the rich confident sound signals once again that this is no gimcrack bus-and-truck tour.

One last observation: Like some tours, critics are not invited until the show has played one or two days in a venue to allow the technical folks to tailor the show to the vagaries of each venue. So we saw the third performance. Yet, the sound levels were so off the charts that people across the bay in Miami Beach might have feared a hurricane was roaring in. Worse, the score and script are so badly constructed that it is difficult to follow developments and back story at the best of times. Unfortunately, at the Arsht, the orchestra drowns out the performers when they are delivering crucial information. Of course, it doesn’t help that some of that information is delivered when six or seven actors are singing different lyrics at the same time as mandated by creators of the piece.

Mackintosh claimed in 2014 that Phantom became the first stage production to reach worldwide grosses of $6 billion – more than twice the world’s highest-grossing film Avatar thanks to more than 65,000 performances and 140 million tickets to patrons in 30 countries and 151 cities in 14 languages. Obviously, theater is definitely a dead-end financial venture.

This is still Phantom for good or ill. It still has Andrew Lloyd Webber’s score intact (which divides people), Charles Hart’s debatable lyrics, and the still murky flawed script by Webber and Richard Stilgoe that lets crucial information zip by so quickly (like Christine’s father or that the lovers escape to the roof of the opera house) that newcomers often get lost.

But here’s a fair question: If this production with all of these players on- and off- stage was to open on Broadway as an unknown property in 2016, would it turn into the monster hit it has become? At this point, if you have seen the original multiple times, it’s impossible to know. Bring a Phantom newbie and ask them.

Phantom of the Opera runs through March 6 at the Broward Center for the Performing Arts as part of the Broadway Across America-Miami series at the Adrienne Arsht Center for the Performing Arts, 1300 Biscayne Blvd. Performances 8 p.m. Tuesday-Saturday, 2 p.m. Saturday, 1 p.m. and 7 p.m. Sunday,. Runs 2 ½ hours including one intermission. Tickets $39-$225 (club level). Call (305) 949-6722 or visit http://www.arshtcenter.org/Tickets/Buy-Tickets-Now

This entry was posted in Performances, Reviews and tagged Adrienne Arsht Center, Broadway Across Miami, The Phantom of the Opera. Bookmark the permalink.