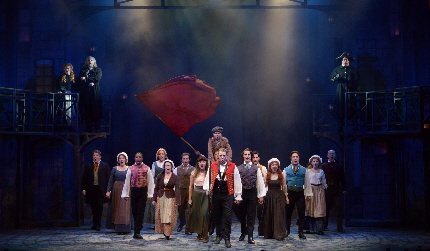 Viewing the Maltz Jupiter Theatre’s Les Misérables is like watching an art restorer wipe away decades of obscuring grime from a canvas and savoring what you forgot was hidden underneath – even seeing colors you didn’t know were there.

This sentiment comes from someone who has seen the show at least seven times including its first year in London, and who would put this edition up against every one of them.

Scoring highest marks for acting, singing, costuming, lighting, set design and staging all under Mark Martino’s leadership, this edition eclipses the quality of almost every production the Maltz has mounted in a decade.

But, believe it or not, the hero may be sound designer Marty Mets working with a cast that enunciates the lyrics as cleanly as we’ve ever heard them under the baton of Eric Alsford. Mets balances 27 voices and 13 instruments so that no one overpowers anyone. The words and music were audible at the back of the auditorium with the clarity of Swarovski crystal. We’ll swear we heard scores of lines we’ve never heard before despite hours and hours listening to the cast album.

Why does this matter? Because the show’s narrative is designed to race by at a breakneck pace usually leaving the audience in a morass of confusion, especially in the scene-setting prologue. So to finally have the words come across so distinctly finally makes the plot something we can follow. And therefore, so much of the themes (there are some) and the specific emotional content come across as pungently and poignantly as it ever has. (Of course, this also exposes the banality of some of Herbert Kretzmer’s lyrics, but….)

South Florida audiences are familiar with just how fine the voices are of some of the local actors in the cast – such as Margot Moreland, Jeni Hacker, Irene Adjan and Gabriel Zenone — but they have never sounded better thanks to Mets and Alsford. Yes, you can hear the people sing.

This 30-year-old epic musical about “a man who steals a loaf of bread and never hears the end of it” has its detractors, from those lyrics to the endless repurposing of six or seven musical themes. But this troupe of actors – from the leads to the ensemble – commit completely to the heartfelt emotional meat that made Victor Hugo’s doorstop of a novel into a deathless classic about Man’s challenging pursuit of goodness and his dogged faith in a God who sometimes seems far away.

Gregg Goodbrod has played Jean Valjean three times before, but that gives him a comfort level inhabiting this impossibly decent man desperately trying to honor his commitment to live a just and holy life. His sterling light tenor is beautifully melodic as exemplified in the iconic “Bring Him Home,” but it’s his precise and expressive delivery of the words that is literally outstanding among his predecessors.

Aloysius Gigl’s Javert is every bit Goodbrod’s equal with a stentorian baritone that underscores how Javert needs a moral rigidity to make sense of the cesspool he supervises. His solos, “Stars” and “Javert’s Suicide,” are virtuoso expressions of internal anguish.

Siri Howard’s Cosette is lovely rather than cloying as often happens, Margaret Kelly’s forlorn Fantine gave a “I Dreamed A Dream” that broke hearts, Elizabeth McMonagle depicted a plausible young woman raised in a curdled crucible of the streets as the pragmatic if love struck Eponine, Joshua Charles Skurnik invested Marius with an appealing naiveté and rapturous enthusiasm, Matt Farcher’s staunch Enjorlas could lead anyone into whatever mouth of hell presented itself, and Zenone makes the Bishop’s short early scene the indelible heart of the show as it moves forward.

Some of us have always hated the kids’ parts in this show, so it was amazing how well Jena Simmons as young Eponine, Ben Kreiger as Gavroche and tiny Sofia Dow as little Cosette enchanted this curmudgeon.

Last but certainly not least, were Richard Vida and Margot Moreland, one of our favorite actresses, simultaneously causing hilarity and horror as the venality personified Thenardiers. Like almost everyone connected to this show, they are almost guaranteed an award nomination in multiple competitions somewhere next year.

Director Martino long ago proved his chops in Maltz productions like The Music Man, but his direction and choreography here certainly post a high water mark. Besides melding everyone into a harmonious whole, Martino’s staging is an example of keeping the narrative flowing unimpeded even through scene changes. But a signal accomplishment is that the audience has no trouble following the sadistically abrupt shifts in time and place, partly due to Martino and partly due to Paul Black’s mercurial-nimble lighting.

Martino gifts the journey with scores of imaginative and telling touches. It can be as fleeting as when Eponine takes Marius’ school book and pretends to read it; Marius approaches her and turns it right side up.

Others define incisive staging. For instance, in most productions, Marius sings the contemplative “Drink With Me” on the eve of the last battle. Then Valjean sitting in another part of the set and having had almost no contact with Marius sings the transcendent “Bring Him Home” about Marius. But Martino places Valjean right behind Marius in the shadows during the young man’s song so that Valjean can develop compassion for the student and therefore justify his fervent prayer.

When Eponine is dying in Marius’ arms, he kisses her goodbye, recognizing for the first time and acknowledging her devotion was more than just platonic friendship.

One more: When the students begins to sing the anthem “One Day More,” Martino has them sing to various small groups of Parisian citizenry in an attempt to enlist them in the cause, thus making a logical pretext for the final rousing tableau as the populace marches toward the audience under the waving red banner.

Matching his work is musical director Alsford who has molded the aural facet of this challenging sung-through work. He also leads a swelling, soaring, muscular 13-piece orchestra which has several strings and reeds more than the Maltz usually springs for – and it shows – or you rather you can hear it.

But equal to everyone, even Mets, is the stunning chiaroscuro lighting by Paul Black. We sat in the “premium” seats elevated at the back, so we could especially appreciate how he cast countlessly varied designs on the floor of the stage. He leaned toward sending shafts of light down from the rafters through the smoky gloom as if God was striving to shed illumination on the dank, dark tragedies ongoing below. In one moment, he fired a flood of pinpricks of lights into the audience, then brought them together onto the stage and brought them in close together into a kind of spotlight, a theatrical co-opting of a rock concert move.

The Maltz takes envious flak from other Florida companies for having such large budgets. (It took in $750,000 at its last fundraiser minus the cost of renting The Breakers). But what the aforementioned folks produced with Les Misérables shows they use that money as well as anyone in the state.

This epic isn’t as good as Broadway; it’s arguably better than Broadway and worth a drive up from Broward, maybe even from Dade.