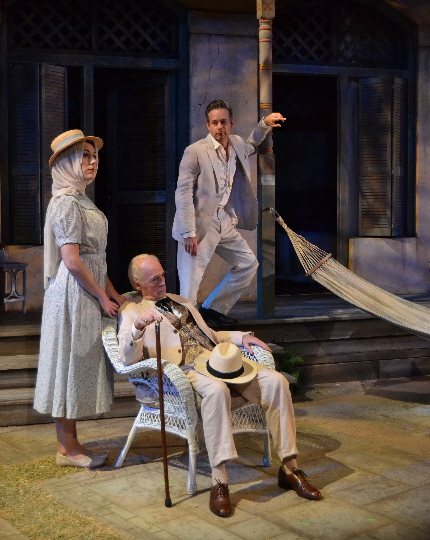 Katie Cunningham, Dennis Creaghan and Tim Altmeyer in a rare clam moment in The Night Of The Iguana at Palm Beach Dramaworks / Photos by Samantha Mighdoll

The emotional histrionics and pyrotechnic acting in the first act notwithstanding, it’s the quiet poignant moments of compassion and connection in the second act that are the most deeply affecting in Palm Beach Dramaworks’ skillful resurrection of Tennessee Williams’ The Night of the Iguana.

This rarely revived play, among the last of Williams’ works with a wide name recognition, is populated with damaged souls akin to Blanche Dubois trying to escape their past and make some kind of peace about their future in a cold, unforgiving world.

And while the peace they find at the end of this long day’s journey into night is as imperfect as they are themselves, there is a sense of a salvation in the discovery of empathy and forgiveness for inborn weaknesses and undeniable flaws.

Such is the heart (in all its meaning) of Dramaworks’ production brought to life and light by Producing Artistic Director William Hayes, a fine cast and a superb support team.

The story is set in a single day and night in 1940 in a fourth-rate hilltop tourist hotel on the Mexican coast run by the recently widowed Maxine, a lusty, earthy woman barely able to say she’s middle aged. Lurching up the hill is her old friend T. Lawrence Shannon, a disgraced minister reduced to leading cheap tour groups through the country, often ending up at Maxine’s establishment.

But the former alcoholic has far more haunting baggage than that of the women’s church group he has alienated with haphazard ways and his tryst with a 16-year-old patron. He long ago lost his faith and his pastorage railing against a traditional vision of God, preferring the one contained in the whirlwind of an approaching hurricane. Another nervous breakdown looms with the cloud cover.

In fact, the fever-plagued Shannon is not simply teetering on the edge of a stygian abyss, he is beginning to tumble over and his only hope – no, he has no hope —  our only hope is that someone will take pity and pull him back from toppling.

Surprisingly, that hope arrives in the form of Hannah Jelkes, a seemingly maiden spinster painter traveling with her 96-year-old senile grandfather, a minor poet striving to finish his last work.

Complicating the situation are the steamy 16-year-old in heat Charlotte who persistently tempts Shannon, and the nominal head of the tour group, the judgmental Miss Fellowes.

As Shannon’s world collapses on him like a cave-in, the resilient and resolute Hannah who has more fortitude than it appears and the voracious Maxine vie for Shannon’s future.

All the major players are lonely, all have been badly buffeted like flotsam blown about a stormy sea. All are seeking exorcism, absolution and salvation. Their sole hope for finding it is in profound human connection – not simply sex – but a bond built out of understanding and accepting each other’s frailty.

For some reason, Iguana is not performed as often as the masterpieces in Williams’ canon. Written in 1961 before he completely surrendered to symbolism, poetry and near-surrealism, Iguana is a transition between creative modes. For instance, the dialogue subtly slips into lovely lyricism that Hayes and the cast make seem natural but is in fact a reflection of Williams’ highly theatrical vision of the beauty of yearning souls.

But it unmistakably echoes Williams’ bottomless sympatico for sensitive human beings such as predecessors Blanche and Laura.  Here, he has Hannah and Shannon in a last bunker against a harsh crass world exemplified by the invasion of German tourists celebrating Nazi victories over the Allies.

Tim Altmeyer’s marathon performance as Shannon is bound to divide audiences. He enters the play as a man driven by fever and likely the DTs, seriously finding suicide an ever more attractive option. He stumbles about on rubbery legs, his arms flailing in uncontrollable spasms and his sweaty face contorting. Even lying in a hammock, his body cannot resist twitching.

Many people may find this operatic rendition over the top, but we did not. First, this is stylized theater not cinematic naturalism. Second, Shannon is already a man at the end of his rope and the fibers are fraying. If Richard Burton in the John Huston film played him more as a morose beaten creature, Altmeyer and Hayes have chosen to invest him with a manic energy that is noticeably calmed by the arrival of Hannah and Nonno. Once you accept those acting choices of a man starting out the play “in extremis,” Altmeyer’s performance is, for our money, masterful. He is always believably, always in the moment even though he is on stage for the majority of the evening. His emotional writhing whether literally or figuratively tied up is harrowing. The only carp is that he often slurs his words and he’s hard to understand sometimes. The north Florida actor is unrecognizable from the caustic writer in Dramaworks’ 2014 production of My Old Lady.

The unassailable performance belongs to New York-based Katie Cunningham who triumphs over the difficult part of Hannah. Her creation may look like a mousy spinster schoolteacher, but by turns Cunningham credibly reveals facet after facet of quiet strength and clear-eyed pragmatism surpassing that of everyone else’s in the play, and yet she maintains a succoring compassion for human fallibility. This dichotomy makes Hannah, arguably, Williams’ most admirable heroine even though she has her own flaws. Cunningham communicates some of this by her voice, which is both tremulous and tough at the same time, yet concealing a tumult within. Proud of her intelligence and self-reliance, Cunningham’s Hannah is embarrassed that her survival now relies on the kindness of strangers.

The two actors do not have a romantic chemistry so much as a communion as casualties of the outside world. The most beautifully realized scenes in the play occur in the second act when Hayes, Cunningham and Altmeyer engage in a subdued tentative emotional dance as the two gingerly reach out for human connection, the hope-less somehow finding the inner reserves to hope once again.

The rest of the cast is just as fine, especially Kim Cozort Kay as Maxine. If she is not as earthy and sexually voracious as the film’s Ava Gardner, she is more skilled at evoking the widow’s barely disguised loneliness under the rough protective armor. Dennis Creaghan’s doddering Nonno is believably at the end of his life, struggling to make one last artistic statement “against the dying of the light.”

We can almost save time by copying past reviews referencing the bar-setting work of Dramawork’s creative team and behind the scenes crews. Master scenic designer Michael Amico and scenic artist Rebecca Pancoast have once again created an environment photorealistic in its tiniest detail such as the battered lattice in the doorways, but also poetic in communicating underlying emotions. Both elements are ratcheted up immeasurably by Paul Black’s endlessly varied lighting design, which subtly changes in the middle of a scene to focus the audience’s attention. Brian O’Keefe’s costumes are the outer expressions of the inner characters, especially Shannon’s disarray of stained white and Hannah’s deceptively prim pastel garb. Matt Corey inserts the sounds of mocking birds, the faint waft of music from a far off cantina and approaching storms, all emanating from different places in the auditorium. All this is executed by stage manager James Danford with Ashley Horowitz and Lara Kinzel. A nod also to Assistant Director Paula D’Allesandris

Hayes, who will only be directing this outing in the company’s 17th season, has expertly paced and staged the proceedings in addition to getting those performances from his cast. More importantly, he has sussed out Williams’ intent perfectly, imbuing the evening with a rue-filled pity and casting it all with a kind of hopeful prayer for these cursed creatures, and all of us as well.

Trying to avoid spoilers, to some degree the ghosts are exorcised, the chains are loosened and the characters start on new chapters they had not contemplated possible. But this is Tennessee Williams and while he saw this as having a more optimistic ending than most of his works, the futures pointedly are not of the happy ever after type.