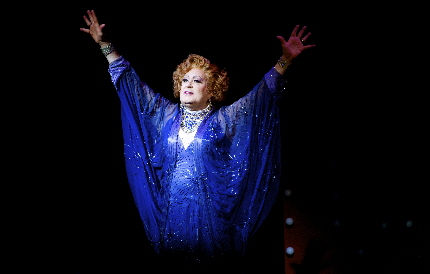 Spangles sparkle in the spotlight as styling showgirls parade across the stage in a musical celebration of enduring love, joie de vivre and self-respect – which proudly encompasses adherents of every sexuality.

The Wick Theatre’s revival of La Cage aux Folles has everything that its last musical, Mame, was missing – beginning with showbiz pizzazz. If its aging leads Lee Roy Reams and Walter Charles are not as powerfully vibrant as some of their predecessors (although they have done the show before), they more than make up for it with a career’s worth of well-honed theatrical chops that will make many audience members choke up or swell with vicarious pride.

Plus the show amps up every time the lithe and agile cross-dressing chorines Les Cagelles prance and strut to a lively pit band, evoking a modest but daring cabaret show on the French Rivera.

La Cage has been popular in gay-friendly South Florida with notable productions at Broward Stage Door in Coral Springs in 2000, Actors Playhouse in Coral Gables in 2007 and the Maltz Jupiter Theatre in 2009. The Wick’s version certainly is in their league.

It may be a given considering The Wick’s museum of original costumes next door, but yes, the wardrobe of baubles, bangles and bugle beads is outstanding (although some pieces fit better than others). They were based on Theoni Aldredge’s original designs with local alterations, plus Reams brought some of his garb from his previous stints in the lead role as the female impersonator, Zaza.

The production’s success is owed in no small part to director/choreographer/stager Norb Joerder. As much as he struggled with Mame, this is a welcome return to the razzle dazzle he brought last season to The Wick’s 42nd Street. He still isn’t particularly inventive staging non-musical scenes other than lining people up across the stage. But his dance routines for Les Cagelles were as strong as you see in most regional theaters and an infectious joy to watch.

Mame fell apart when the music stopped. That doesn’t happen this time. Joerder elicits from Reams, Charles and the cast all the comedy, poignancy and sentiment in Harvey Fierstein’s well-crafted adaptation of the French film. The lengthy book scenes are so deftly attended to by all involved that they don’t seem like interludes between production numbers and power anthems.

Most audiences know that the musical focuses on a gay couple on the far side of middle-age. Georges is a former chorus boy turned producer-emcee of the drag cabaret, La Cage aux Folles (The Cage of Mad Women). The love of his life, Albin, is also his star attraction performing as Zaza, a larger-than-life chanteuse in wigs, mascara and dazzling evening gowns. The harmony unravels when their straight 24-year-old son wants to marry the daughter of an ultra-conservative homophobic political leader. The scenes bounce between the family working out their dilemma and the glorious uninhibited numbers performed in the club by Zaza and the dancers.

Reams is clearly having a blast as the effusive, tender-hearted Albin/Zaza. Provincial audiences may not know Reams’ name, but Broadway aficionados savor his past as one of the premier tap dancers in such productions as the original 42nd Street and Applause.

These days, Reams is older, thicker around the middle (aren’t we all), moves a little slower and his singing voice has gotten thinner with age. Original cast album fans will miss the resonant baritone of George Hearn. But Reams throws every iota of stagecraft he knows into every moment whether it’s deftly negotiating comic bits in a spoken scene or making up for not being able to hit every note in “I Am What I Am” by speaking lyrics with a stirring passion. Looking like Dame Edna, Reams’ Zaza is a hoot as he luxuriates in playing with the Wick audience standing in for the La Cage patrons.

Charles, another Broadway vet, looks like a frail grandfather and, frankly, doesn’t have that zing you expect from a club emcee. But when he opens his mouth, he nails the comic timing of the script and his fine strong singing voice smoothly embraces his musical numbers, especially selling the sincerity of the love song “Song on the Sand.”

Composer Jerry Herman was well-served by the on-stage eight-piece band led by Michael Ursua. It sounded just full enough to evoke a cabaret’s compact pit band with trumpet and trombone, if not a full-fledged Broadway orchestra.

It’s impossible to watch this show in Florida this month as LGBT couples line up at the courthouse without reflecting how things have and haven’t changed in the 31 years since this show opened on Broadway.

A few months after La Cage bowed to a rapturous reception in the summer of 1983, two of the producers – later to die too young – told me that the entire team had been terrified that this almost chaste tribute to the universal virtue of love was going to be reviled in New York City, let alone anywhere else. The lead actors George Hearn and Gene Barry always mentioned in interviews, just in passing of course, that their wives said this or that to them the other day.

Today, the musical is one of the most beloved “modern” mainstream shows, embraced by a rainbow of audience members from the LGBT community to straight-laced straight patrons reluctantly but consciously seduced by its paean to values that we have in common rather than those that everyone might not share. Perhaps a sign of the times is that this is the first production I recall in which Georges and Albin actually share a quick peck on the lips.

One theme that has always been present — but seemed to come into clearer focus here — is that surface sexuality is all an illusion and it is silly to waste time trying to classify a three-dimensional human being. All that matters is abiding love.

Note: The Wick seems to finding its audience: At the first Sunday matinee, nearly every one of the 300-plus seats was filled. It would take a better memory than mine to remember the last time that building had a full house. 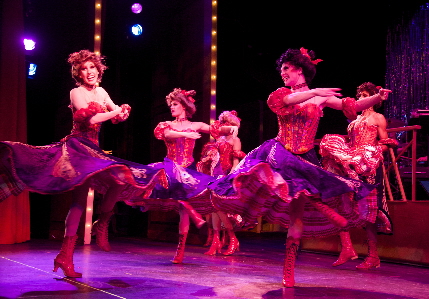