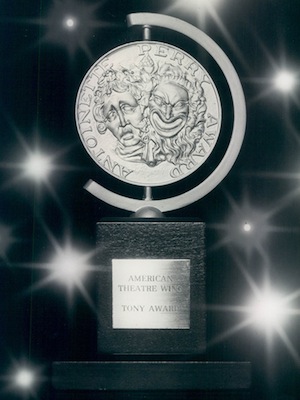 Theater Shelf, a recurring feature, reviews recently-released books, CDs and DVDs of interest to theater lovers. Some are popular titles like a new Original Cast Recording, others are works you’ll be intrigued by, but didn’t even know about.

Editor’s Note: We’ll be providing live coverage of the Tony Awards on our Facebook page and on Twitter at #tonysbill beginning at 7:45 p.m. June 8

The 2013-14 Broadway season has produced a wide variety of scores from musicals that we are fortunate to have had recorded commercially. Indeed, the season has been marked by a notable raft of very well recorded cast albums, many marvelously packaged.

It is surprising, then, that of the seven nominees for the Tony Awards’ top prizes – best new musical and best revival of a musical – we only have three albums at the moment. The Disney recording of Aladdin, while already available for digital download, won’t be in stores in a physical CD until June 17. The score for the Broadway adaptation of the animated film used all five songs from the movie, but added seven new ones, all with music by Alan Menken but featuring lyrics by Chad Beguelin as well as by Howard Ashman and Tim Rice who did the lyrics for the film.

Further, there’s no word yet of a recording of After Midnight, the Cotton Club revue that has been nominated for Best New Musical, nor for nominated revivals of Hedwig and the Angry Inch or Les Misérables.

What we do have, however, is cause for celebration.

Leading the way with no fewer than 10 nominations including Best New Musical, Best Original Score, Best Orchestrations and competition between its two male leads for the Best Actor prize, is a delight titled A Gentleman’s Guide to Love & Murder. Easily the most impressive display of pure craft in the creation of a musical comedy score, this English music hall style spoof of a murder mystery pits Bryce Pinkham as the hapless would-be murderer against Jefferson Mays as all of his victims. Musically and lyrically, the precision of construction is a wonder. This confection by Steven Lutvak (music and lyrics) and Robert L. Freedman (book and lyrics) is a delightfully entertaining disc from Ghostlight Records. Be prepared for out-loud laughter as well as out-and-out admiration on first hearing.

Beautiful, The Carole King Musical, as you may have guessed from its subtitle, is the latest success in the genre of a jukebox musical – one with a score made up of songs from the catalog of its subject. In telling the story of King and her husband Gerry Goffin and colleagues/competitors Barry Mann and Cynthia Weill, book writer Douglas McGrath uses their songs and those of a few of their contemporaries. Audiences already know ditties like “Take Care of My Baby,” “Up on the Roof,” “You’ve Lost That Lovin’ Feeling” and, this being Broadway, “On Broadway.” The task of giving the entire score some feeling of being part of the same show was well handled by Steve Sidwell who is a nominee for Best Orchestrations.

The only nominated revival to have a Broadway Cast Recording is the Sutton Foster starrer, Violet. Its score, mixing folk, gospel and pop sounds with a western flavor, was Jeanine Tesori’s first, coming before Thoroughly Modern Millie, Caroline, or Change, Shrek the Musical or the off-Broadway Fun Home. I first came into contact with Violet in 2002 when Keegan Theatre mounted it on a towering setting in Arlington, Virginia’s cavernous Clark Street Playhouse which sadly is no more. It was clear at the time that this was a piece that could get under the skin of audiences. Dianna Harris did a fine job with the title role but this recording demonstrates just how much more depth there was to mine and the role becomes a break-out one for Foster, who has made her name as a triple threat in musical comedies like Thoroughly Modern Millie, The Drowsy Chaperone, Shrek and Anything Goes. Here she’s subdued, controlled and emotionally affecting. PS Classics has recorded the score with underscored dialog that approximates the experience of seeing the show in the theater. A copiously illustrated booklet gives the show a dark look while giving the listener both a full synopsis and the text.

The new production of Les Misérables hasn’t resulted in a new recording of this much produced and much recorded score. Still, the live 2010 Cast Album on First Night Records is of the production that was the basis for the current Broadway revival and lets us hear the new, slightly anemic orchestrations for a 17-player pit orchestra by Chris Jahnke. However, none of the new Broadway cast are on the recording. This is particularly problematic in that the new Broadway Jean Valjean, Ramin Karimloo, has been nominated for Best Performance by an Actor in a Leading Role in a Musical.

Surprisingly, the much-anticipated If/Then drew only two nominations. However, it isn’t surprising that one of them was for Tom Kitt and Brian Yorkey for Best Original Score and the other was for Idina Menzel for Best Performance by an Actress in a Leading Role in a Musical. The album amply demonstrates that it deserved both of those nominations. Menzel clearly dominates in a cast with strong supporters, and the score by Kitt and Yorkey is a superb, uncompromising construction in support of a piece of theater that is complex and thoroughly mature. The album would lead you to believe it deserved a third nomination, one for Michael Starobin’s orchestrations which are a full partner to the vocals on the recording. However, it may be that the orchestrations do not sound this good in the Richard Rodgers Theatre on 46th Street. The recording augments the show orchestra’s four string players with an additional eight.

The category Best Orchestrations brings us to the jazziest, pizzazziest album of the bunch – the Broadway musical adaptation of Woody Allen’s movie Bullets Over Broadway with Allen’s Tony-nominated book under the direction of Susan Stroman, who was nominated for her choreography. This is sort of a jukebox musical of a period before the invention of the juke box. Allen uses pop songs of the 1920s and 30s, adapted by Glen Kelly, all orchestrated to a scintillating sizzle by Doug Besterman. If those names look like a familiar package, think back to the high-octane hit The Producers. Stroman, Kelly and Besterman made the most of Mel Brooks’ material there and here they make the most of Allen’s. Everything from “Yes We Have No Bananas” to Cole Porter’s “Let’s Misbehave” gets the rollicking treatment. Of note, however, is a radically truncated first track. The overture, at least in the copy provided for review, shuts off abruptly before track two begins. Here’s hoping that isn’t true of the released CD.

The other nominees for Best Orchestrations are no slouches either. In addition to Steve Sidwell’s beautiful work on Beautiful and Jonathan Tunick’s delightfully sophisticated augmentation of the melodic and harmonic inventiveness of Gentlemen’s Guide, Jason Robert Brown finds himself in the unusual posture of having been nominated both for Best Original Score and for Best Orchestrations for his surprisingly short lived The Bridges of Madison County. It is rare for a Broadway composer to do the orchestrations for his own score. Many of them are capable of doing it, but simply don’t have the time during the hectic period of rehearsal and tryout. Brown handled both chores and handled them superbly, as the dual nomination attests. Brown referred to his score as “an octet, a piece for eight lonely voices on a large stage.” The supporting orchestrations feel very much like augmented chamber music with the piano dominating at the start but rich strings (four players on violin, viola and cello) providing heft in support of the emotive vocals, especially those of stars Kelli O’Hara (nominated for Best Leading Actress) and Steven Pasquale.

Stephen Flaherty and Lynn Ahrens (Ragtime, Once On this Island, Seussical)  teamed up with bookwriter Thomas Meehan (Annie, Hairspray) and none other than Sylvester Stallone to musicalize Stallone’s iconic film Rocky. It drew four nominations: two for design, one for choreography and one for Andy Karl’s performance in the title role. It is for a chance to sample that performance that the album holds its greatest interest. The score is serviceable although it stumbles a bit when it joins the famous fanfare that Bill Conti wrote for the original movie to a five-note phrase of Flaherty’s that sounds distractingly like one he used with similar prominence in Seussical. Ms Ahrens says in her note in the booklet that she and Mr. Flaherty are “happy that this recording will provide the opportunity for a close-up listen to the songs of Rocky.” It would have helped had they included even a sketchy synopsis which would give those who aren’t thoroughly familiar with the story of the movie, which is now nearly 40 years old, a chance to understand the role of each song in the storytelling.

The only nomination for the short-run bio-musical A Night With Janis Joplin is for its star, Mary Bridget Davies as the titular blues rocker. Broadway Records preserves her uncanny channelling of Joplin which is backed by a solid combo. The show racked up 140 performances before closing supposedly to move to an Off-Broadway venue, but the producers pulled the plug before it re-opened downtown on 23rd Street. The album serves, as the show itself did, as a convenient overview of a brief but notable career, and at the same time, demonstrates what it is the Tony nominators saw in Davies’ vocal performance.

After such a rich season, there are now many hours of recordings that you may want to add to your theater shelf.

The Bridges of Madison County

This entry was posted in CDs / DVDs, Reviews and tagged A Gentleman’s Guide to Love and Murder, Beautiful: The Carole King Musical, Bullets Over Broadway, If/Then, Les Miserables, The Bridges of Madison County, Tony Awards, Violet. Bookmark the permalink.