They’ve Got Rhythm: Wick’s Glorious Crazy For You 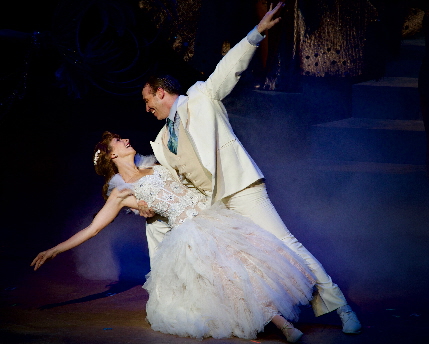 Before opening night 27 years ago, Crazy For You seemed like yet one more faux nostalgia attempt to wring one last round of cash from a dying audience who fondly remembered what musicals were like in the 1920s and 1930s.
– a tactic that seemed pretty played out.

What skeptics didn’t count on was the inventive direction of Mike Ockrent, the breathtaking choreography of Susan Stroman, the wry book by Ken Ludwig, performances from an array of charismatic leads, one of the hardest-working terpsichorean ensemble seen in years, and the George and Ira Gershwin songbook.

The result was a time-machine evocation of the by-gone vibrant vision that Julian Marsh was talking about. But with energy, wit, charm and unabashed ebullience Crazy For You was a runaway hit with all generations.

In 2019, if you want some idea what that production was like, what those Depression Era musicals were like, live and in the flesh, settle in for The Wick Theatre’s glorious revival of Crazy For You.

Crazy For You bowed on Broadway in 1992 from an idea by Ockrent (Me and My Girl) and scriptwriter Ludwig (Lend Me A Tenor). They tossed out much of the creaky libretto for George and Ira Gershwin’s’1930 Girl Crazy, rewrote the script and pulled in Gershwin standards and rarities from several sources to produce ‘The New Gershwin Musical’ that ran 1,622 performances.

At the risk of seeming disorganized, this review cannot go another paragraph without this observation: If you were going to stage a musical in South Florida that requires two supernaturally talented, engaging dancer/actor/singers – a reincarnated song-and-dance couple akin to Fred and Ginger or Gene and Cyd — only two names would leap to mind: Matt Loehr and Julie Kleiner.

Executing David Wanstreet’s tap-dominant choreography, molded with comic tropes by Norb Joerder and guided musically by Eric Alsford, well, this couple is as perfect here as they were in the Maltz Jupiter Theatre’s Me and My Girl.

Loehr, who enchanted audiences in Will Rogers Follies, the aforementioned Me and My Girl and the Maltz’s earlier production of Crazy, is charm incarnate as Bobby the rich kid who wants to trade his banker’s job for a turn as a Broadway hoofer. One of Loehr’s strengths is reinterpreting a role to fit his skill set, so even when he is miscast as he was in the Maltz’s The Music Man, he makes the part fit him. His Bobby here has a more hapless, slightly goofy, over the moon quality than predecessors we’ve seen. And for him, it works perfectly, from the grin you can see from the next town over to the vaudevillian physical comedy of flailing legs as he tries to stand up.

What he exudes both as a character and as a performer is unadulterated, unrestrained joy. While not stepping out of character, Loehr makes it clear that Matt is having a hell of a good time and you’d have to be an ol’ stick in the mud not to join him in it.

Then there’s Kleiner who has nailed every part you’ve seen her in from Amalia in She Loves Me to Julie Jordan in Carousel. When they were passing out talent at her crib, she got more than her share of abilities to dance and to act vocally through a song as she does peerlessly in “Someone To Watch Over Me.” As Polly, the independent postmistress and theater operator in tiny town Nevada, she can be a slapstick pal joining in a raucous production number or break hearts in a solo love song.

Some acting couples are skilled at pretending to have chemistry. But these two actors clearly have an affection for each other.

And when the entire cast joins in, such as the Act 1 closer “I Got Rhythm,” in which Wanstreet has every possible prop used as a percussion instrument, it’s pure hallelujah. Even the normally restrained Wednesday night audience was clapping along.

Such a supporting cast: Aaron Bower is delightful haughty as the society dame chasing after Bobby, Wayne LeGette plays the Ziegfeld-like producer Bela Zangler, Steve Carroll is Polly’s dad, Edward Kemper is the saloon owner hoping to buy out the theater, and Dalia Aleman is Bobby’s imperious nail-tough mother.

Special note goes to the always mesmerizing Emily Tarallo as Zangler’s love interest Tess who is the fictional company’s dance captain as well as the real one here. This show has a special meaning for her because her stepfather Bruce Adler played Zangler on Broadway and his visage is projected in a pre-show slide show.

One Response to They’ve Got Rhythm: Wick’s Glorious Crazy For You