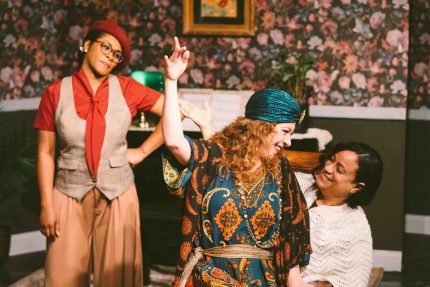 The iconic playwright’s words reprinted in the playbill of Thinking Cap Theatre’s courageous if problematic production of Fornés’ seminal masterpiece, Fefu and Her Friends, have multiple ironic resonances.

Thinking Cap’s passionately delivered work elicits a wide range of reactions from a sense of empowerment to enlightenment to confusion to boredom to a laundry list of others.

But even though this production produces such emotional responses, the quote suggesting the philosophical-social analysis is secondary or not even the point of the evening seems seriously disingenuous.

Because the acclaimed work seems to compress an entire seminar of complex and deep contemplations on imprisoning gender stereotypes, sexuality, class,  relationships that beg the audience to chew on them for days, months, even years to come.

The quote also provides a convenient excuse when the tsunami of a hundred ideas hurtling at a warp speed, frankly, overwhelms the audience which never gets more than a millisecond to process one promulgated idea before the next one comes crashing in.

This much venerated 1977 work was and is honored as among the first contemporary plays to investigate visions of feminism as more than the “you’ve come a long way, baby” of the ‘60s  to a profound questioning of the bedrock tenets that led to the subjugation and complicit surrender for several generations of women.

Fornés’ character-centric approach (as opposed to plot driven) is seen by some as falling somewhere between her initial love of the highly theatrical style grown during the ‘60s and ‘70s off-off Broadway and a more naturalistic one that investigates feminists’ direct challenge to venerable traditions.

All of which is a perfect fit for Thinking Cap Theatre. Over ten years, the chance-taking company has built a reputation for thought-provoking consciousness-raising productions using highly stylized theatricality and gender-examining issues.

Sometimes its approach triumphs with memorable, mind-expanding productions such as its cross-gendered The Importance of Being Earnest or A Public Reading of an Unproduced Screenplay about the Death of Walt Disney and its transcendent Happy Days. Other times, it can seem self-indulgent, akin to artists whose primary motivation is expressing a vision, with clear communication coming in second or third.

Every second of this production exudes the intelligence, imagination and passion of the entire company from the cast to the designers down to the crew, but above all, the singular vision of company co-founder and director Nicole Stodard.

Which is not to say that it lands solidly all the time. Or depending on the audience member, most of the time. A lot of people are going to leave the company’s new home at the MAD Art gallery in Dania Beach scratching their heads, impressed with performances, direction and especially the visual design elements – which ought to make the late playwright happy so far as her lauding “experiencing something that you don’t understand.”

Much of that shortfall would seem rooted in the speeding juggernaut of ideas heedlessly running over the audience members wishing they could take a moment to evaluate the brilliance and the context of what’s being advanced. You’d have to see it two or three times to begin to encompass half of it.

The premise – some of which became clearer once you read its Wikipedia entry – centers on a 1935 gathering of eight female friends at the New England estate of Fefu to practice a multi-discipline program appealing to neighbors for money to support some educational effort. Each woman has a distinct character and some of them have been lovers.

Then after holding forth on Fornés themes, they break up into four locations in Fefu’s house – and in the MAD Arts facility – to provide a closer look at the relationships and ideas. The audience splits into four groups and visits each room where a nine-minute playlet can be seen. While you are in one room, you can hear what’s happening in the others – a bit distracting, but it reinforces the sense of it all happening at one time.

Then everyone returns to the living room for a rehearsal of the imminent program, punctuated by their continuing discussion.

But subtly the tone of the tale has slipped into darker and more surreal climes. A shotgun harmlessly set off in the first act comes into play in the third – Hedda Gabler was an early inspiration to Fornés. Indeed, the final few minutes of the play involving that firearm escaped the comprehension of this benighted critic and some others in the audience.

The cast, especially Rita Cole as the vibrant Fefu, succeeds in making much of Fornés’ stylized stilted language sound nearly conversational until it comes time to unload with a lengthy pronouncement. A lot of this sounds like a late night dorm room bull session except the quality of the back and forth is many levels higher.

But no matter how independent these sages seem, they all communicate a sense of being constrained by the mores of the times (and presumably to Fornés, the present). Fefu says, “There’s nothing wrong with being scared; it makes me strong.” But later she is revealed to be hopelessly tied to her husband.

The submissive wheelchair-bound Julia says bitterly, “The ‘human being’ is a masculine gender.” She says, “If a man commits an evil act, he must be pitied. The evil comes from outside him, through him and into the act. Woman generates the evil herself.”

Sara Grant as a Isadora Duncan wannabe Emma has the most fun as an actress rehearsing her classic-fantasy spiel for the program. Think of the “one Grecian urn” scene in The Music Man.

Angelina Lopez Catledge’s Julia was narrowly shut down after nearly being killed by a hunter’s errant shot. But when we get to see her alone in her room, we hear her inner torment erupt.

The rest of the cast, molded by Stodard, does solid work: Dina Lewis, Jordan Patriarca, Andrea Terrasa, Jinon Deeb and Jessica Farr who nails a wry description of each year in a doomed seven-year relationship.

One of Thinking Cap’s triumphs, no matter the quality of the rest of any of its production is its visuals.

Alyiece Moretto-Watkins’ set designs (remember this is for five different rooms) are time machines rife with period perfect furniture including an icebox and stove, elegant wallpaper, down to the periodicals that the lounging women are reading.

They are enhanced by Bree-Anna Obst’s creation of the ever-morphing environment through her lighting, sound and projections. The most memorable of the latter is in Julia’s room: pure white walls and floor-to-ceiling mirrors which display a forest of dying leaves. As Julie sinks lower in depression, a layer of leaves vanish regularly with a loud crack, until they almost disappear completely. And threaded through the pre-show and the entire evening is 1920s’ vo-de-o-o music thanks to Obst and Stoddard.

Stodard’s costumes are a visual encyclopedia of the period garb of women of a certain class, each giving a clear sense of the character’s personality, from the straight-laced suit of Cecilia to the flowing fabrics and iridescent turban of Emma.

For context, Fornés who died in 2018, was instrumental in developing the off-off-Broadway facet of theater and won eight Obies including one for Fefu. A teacher as well as writer, the Cuban-American mentored Latinx playwrights like Miami’s Nilo Cruz and has been cited as an influence by Tony Kushner, Paula Vogel, Lanford Wilson, Sam Shepard and Edward Albee. Stodard, a devotee of Fornés’ work, produced her play Mud in 2016.

Thinking Cap went into a partial hibernation when Covid sidelined this production, and their home at the Vanguard Theater in Fort Lauderdale became unavailable. But now as the resident company of MAD Arts in Dania Beach, they have come back with a work that reaffirms its commitment to work you will see nowhere else. 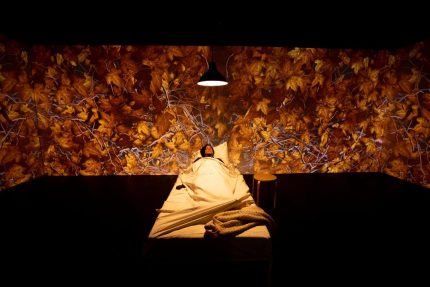