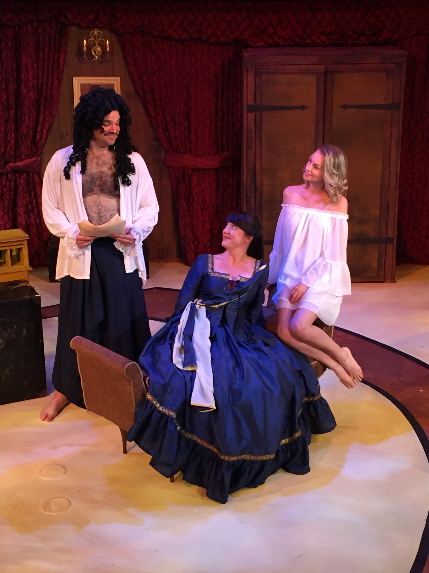 An unusual love triangle in Thinking Cap’s Or, including Alex Alvarez as King Charles II, Niki Fridh as Aphra Benn and Betsy Graver as Nell Gwyn / Photo by Nicole Stodard

If you have not seen one well-executed in a while, Thinking Cap Theatre’s production of Liz Duffy Adams’ Or, is a reminder of just how rollicking a Restoration comedy can be. Strangely, it’s even more so when it’s penned in 2009 and features decidedly 21st Century overtones about women’s independence from male domination and socially proscribed sexual expectations.

This delightful daffy farce underpinned with social commentary fits Thinking Cap’s eclectic bent for thought-provoking comedies and dramas that are aggressively off-beat (like its recent gender-bending The Importance of Being Earnest), have a literary bent (Vita and Virginia) or at a minimum are a step away from predictable mainstream fare (the examination of religion in the tent revival Church). Some productions land better than others, but you are always certain to see something you haven’t seen before.

For instance, in Or, you will witness the tall, broad-shouldered mustachioed actor Alex Alvarez quickly changing from a swaggering King Charles II to a paranoid masked conspirator William Scot to a female theatrical producer, the locomotive Lady Davenant (with Alvarez wearing a towering white wig bedecked with butterflies, but with his moustache still visible.)

Or, is a fictionalized but factually-rooted depiction of the real-life Aphra Benn, hailed as the first major female playwright in English theater. She wrote 1677’s The Rover which Thinking Cap co-founder Nicole Stodard staged in 2013.

The play begins and ends with actors speaking in erudite rhyming verse that could have been inked by Wycherly or Congreve, uttered with plummy English accents. But much of it is a broad comedy of manners worthy of Goldsmith’s later She Stoops To Conquer, highlighted with door-slamming farce, class-conscious satire, blue language, and slathered with bawdy and droll wit.

After a genial prologue to the audience delivered in flawless meter by Niki Fridh as Benn herself, the plot opens with Benn in debtors’ prison because Charles has failed to pay her for her work as a spy overseas. He himself visits to free her and to try to resurrect an affair with her.

Benn fears the dependence of being one of the king’s many and transient mistresses. She gets him to agree to subsidize her real goal – becoming a playwright in the newly-revitalized theatrical world that had been shut down during Cromwell’s Puritan Reformation. In exchange, their friendship has benefits that stop just short in intercourse. Benn is an atypically free spirit for the period, a quality that she shares with her new friend, the stage star Nell Gwyn (Betsy Graver). The kindred spirits are attracted by each other’s irreverence for the restrictive social conventions of the period, and also find themselves considerably attracted to each other physically as well as platonically.

Benn’s attempts to complete her first play are interrupted by the amorous Charles and Gwyn. Complicating matters is the appearance of William Scot (also Alvarez), a former espionage colleague of Benn seeking shelter from the king’s minions because he is connected to an assassination plot by Catholics hoping to retake the throne.

After a while, all of these characters, plus Lady Davenant who wants to commission a Benn play overnight and Mariah the maid (a hooded Graver with a gravelly voice), mix and match as the plot pirouettes.

Stodard has a rare facility for this work. The literature scholar guides the cast in delivering the lines with both the lyricism of the lush language and a clear comprehension of what the torrent of words is trying to put across. Occasionally, the Byzantine plot moves a tad too fast for anyone to follow, and folks with ADHD may begin to stray. But the jumble is in keeping with the door-slamming spirit that Stodard knows how to stage.

For much of the play, the characters grin with delight at the wry vagaries of life and the actors beam as well with the knowledge that they are performing a hoot.

Whatever you think of the play itself, Fridh is once again a marvel-inducing actress. She maintains the music of the faux restoration verbiage and syntax, yet delivers the intelligence inherent in the script. Her Benn is a vibrant creature well aware of the restrictions of the period, but determined to challenge and conquer them.

Graver is luminous with a vibrance that reaffirms for the umpteenth time that she has a far-reaching skill and range inworks as diverse as Venus In Fur and Fox on the Fairway. Her bubbly theatrically-effusive Gwyn glows with the sense that the world is opening up possibilities for her and she intends to savor them like a cold pint of ale in a raucous tavern.

Alvarez’s Scot and Charles are broad buffoonish characters (intentionally so), but his one scene as Lady Davenant was uproarious, This Lady Bracknell on steroids charges into Benn’s study like a Cat 5 storm, holds forth without giving anyone a chance to do anything but grunt, and then leaves a few minutes later to applause from the audience. It is one of the funniest five minutes we’ve seen this season.

The script is filled with droll epigrams. Referring to the renaming of New Amsterdam to New York after the English bought it, Aphra says, “I don’t think much of this modern mania for naming places “New” something. An inherent contradiction, don’t you think? If it’s new, it’s not York and if it’s York, it’s not new.”

But there are also incisive observations about sexual politics and constricting gender roles such as Benn’s pronouncement that because Charles is far more liberal than Cromwell: “Freedom for a woman can only happen under an enlightened monarch.” With both women somewhat dependent on men for their livelihoods, there is much talk about whether being a woman means being a prostitute in one sense or another.

Sex suffuses the evening. Aphra says to Gwyn: “Nature endowed us with a glorious gift for pleasure and nothing is more natural than to take all honest advantage of it…. The only sensual sin is to take what isn’t freely given. If I am lucky enough to attract the true affection of a lovely man or woman, and if together we can increase the sum total of happiness in the world for even a hour, I consider that an act of virtue, not vice.”
There are also intentional resonances to the present that playwright Adams draws, having Benn and Gwyn reference an ongoing war, crushing poverty, sexism and political strife.

If the words Restoration Comedy make you shudder at the thought of that ill-fated nap you took in high school literature class, Thinking Cap’s droll production may well change your opinion.

Or, runs through March 5 from Thinking Cap Theatre performing at The Vanguard Sanctuary for the Arts, 1501 S. Andrews Ave., Fort Lauderdale, on the west side of the street across from Broward Health Center. Performances 8 p.m. Thursday-Saturday, 5 p.m. Sunday. Runs 1 hour 25 minutes with no intermission. Tickets $35; students with ID $20. Visit www.vanguardarts.org, thinkingcaptheatre.com or by phone at (813) 220-1546.