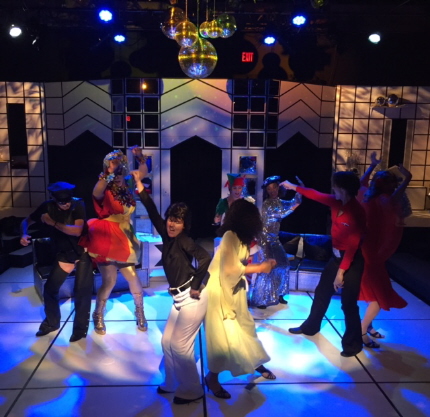 The ever adventurous Thinking Cap Theatre founder Nicole Stodard had an intriguing idea for a spoofy mashup: Set Oscar Wilde’s sublimely witty The Importance of Being Earnest in a madcap lampoon of New York City’s disco era.

The urbane and farcical elements are irreconcilably at war with each other stylistically, so while there is considerable inventiveness on display, there is no synergy. But each facet – one of the funniest literate scripts ever written in the English language and a zany hoot of a production – is so strong on its own merits that the result is a mostly satisfying gigglefest worth the investment.

On top of the change in setting, three of the lovers are cross-gender cast with a straight face, Lady Bracknell and Gwendolen are African-Americans, Rev. Chasuble just walked out of a leather bar’s Village People tribute show and Miss Prism is a glam queen in what may be the highest drag seen on a mainstream stage.

And peeking out from under the non-stop visual hijinks orchestrated by the ingenious Stodard you can still hear, most of the time, Wilde’s brilliant script, perfectly constructed and containing more witticisms per minute than virtually any other comedy in Western literature.

So much physical and farcical comedy goes on in the first act that Wilde does get lost in the tumult occasionally. But in the second act, everyone settles down and his genius shines through in such passages as Cecily and Gwendolen’s classic scene of sisterly bonding, then feuding, the bonding again.

Even with all the disco dancing breaks, BeeGees music and other cute fillips spicing up the proceedings, Stodard, the literature scholar, has deftly trimmed an hour’s running time out of the original script without doing any harm at all. She also has tweaked British references so that Victoria Station becomes Grand Central, etc. The better you know the piece, though, the more you will appreciate all of the analogs she has laid on.

The plot remains intact. John “Jack” Worthing (Elizabeth Price with a blow-dried wig and penciled on moustache) wants to propose to the lovely Gwendolen Fairfax (Carey Brianna Hart) despite the disfavor of her mother, the imperious Lady Bracknell (Karen Stephens every inch a Harlem Renaissance doyenne). His friend, the ne’er-do-well Algernon Moncrief (the wonderful Clay Cartland) falls in love with Jack’s dewy ward Cecily Cardew (an outrageously funny Noah Levine). Stirring the pot are Cecil’s maid Miss Prism (a stunning Johnnie Bowls, in every sense of the word) and her beau, Rev. Chasuble (the ever dependable Jim Gibbons doubling as Lane the butler).

But other than that, Wilde has been updated with an ever-primping Algernon channeling the pelvis-popping John Travolta on the dance floor; a twitchy Pabst-swilling Jack sounding like DeNiro in Taxi Driver; copious disco music and dancing choreographed by Kevin Black; a stylish black, white and mirrored set by Alyiece Moretto complete with 12 mirrored balls; lighting by Preston Bircher, and cringe-inducing costumes because they are so period perfect by Stodard. There’s a dozen timely references to coke sniffing and Charlie’s Angels.

The performances are delightful, although folks needed a few more rehearsals to nail down their lines.

We are not getting paid by Cartland to keep saying nice things about him, but he truly is a unique comic talent who always invests a goofball sensibility all his own. Levine similarly throws himself completely into the airy yet surprisingly pragmatic Gwen. Their second act scenes are hilarious.

Stephens is downright regal and breaks into diva song mode when she wants to make a point. Hart brings that needed sense that Gwen is more experienced than Cecily. Bowls is a visual treat but he races through the verbiage with no sense of the music or meaning in the words.

Price is always in there pitching, but the Brooklyn-Queens accent she and Stodard chose for John really conflicts with Wilde’s crystalline language. The accent, not her solid acting, undercuts every scene.

That underscores the problem. There may be ample social comparisons between Wilde’s time and the Saturday Night Fever era as Stodard points out in a director’s note. But Wilde’s humor digs at the British social strata of privileged snobs who prized a false brittle veneer of “civilized sophistication.” Putting it in a hedonistic 1978 America with Tony Manero is an analog that works against Wilde.

But if you’re not a Wilde purist, this Earnest production is a rib-tickler.

(Full disclosure: I appear with Stephens as co-hosts of the Spotlight on the Arts television show on BCON-TV.)

The Importance of Being Earnest runs through Dec. 13 from Thinking Cap Theatre performing at The Vanguard Sanctuary for the Arts, 1501 S. Andrews Ave., Fort Lauderdale, on the west side of the street across from Broward Health Center. Performances 8 p.m. Thursday-Saturday, 5 p.m. Sunday. No show Thanksgiving Day. Runs about 2 hours with one intermission. Tickets $35; students with ID $20. Visit www.vanguardarts.org, thinkingcaptheatre.com or by phone at (813) 220-1546.