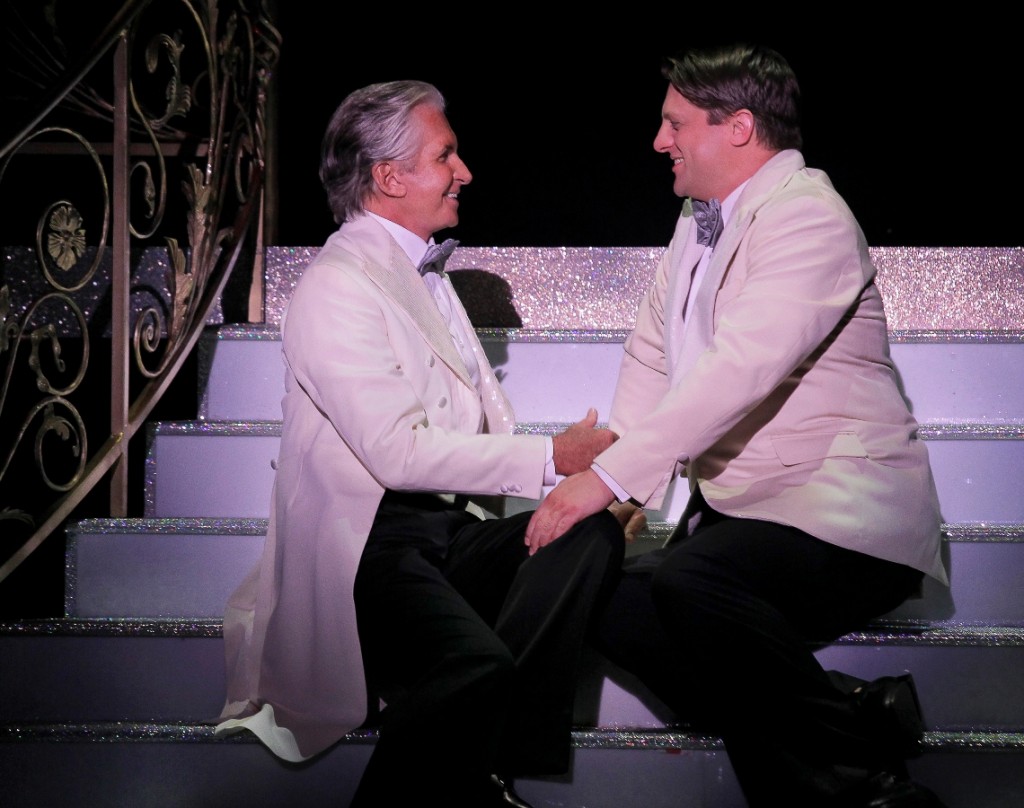 Coinciding with Gay Pride celebrations here in South Florida, La Cage aux Folles, the musical about a charming nightclub owner and his flamboyant partner, has landed at Broward Center in Fort Lauderdale with a likable production containing a don’t-miss performance.

Based on a 1973 French play that was re-made as a successful French film, La Cage aux Folles came to Broadway in 1983, with music and lyrics by Jerry Herman and a book by Harvey Fierstein.  It was made into the American film The Birdcage in 1996, starring Robin Williams and Nathan Lane.

La Cage Aux Folles is the now classic tale of Georges, (George Hamilton) the owner of a nightclub in Saint-Tropez, and his partner Albin, (Christopher Sieber) who moonlights as diva-licious chanteuse Zaza. When Georges’ son brings his fiancée’s conservative parents home to meet the unique couple, a ruse ensues that puts relationships to the test and speaks to the true definition of family.

This version of La Cage aux Folles is scaled back, and feels smaller than previous renditions.  The musicians have been raised from the orchestra pit to theater boxes above the stage, a design that brings the audience further into the intimate world of a nightclub. Some of the production numbers by Les Cagelles have a darker edge to them, more Cabaret than classic, colorful La Cage. But it works, largely due to the exceptional performance by Sieber.

Sieber, who was nominated for Tony Awards for playing Lord Farquaad in Shrek: The Musical and Sir Dennis Galahad in Monty Python’s Spamalot, is the heart and soul of the show.  What’s most impressive is that Sieber excels at turning this old chestnut of a role into his own special creation through little nuances and laugh-out-loud bits. La Cage aux Folles is simply more vivid when Sieber is on stage.  His flamboyance hits new heights on the drama queen scale, but he also nails the more poignant moments of the show. On opening night, his powerful performance of the pride anthem “I Am What I Am” got a thunderous, well-deserved standing ovation.

While Sieber is the workhorse of this production, Hamilton brings the star power. Playing a charming nightclub host and master of ceremony is no real stretch for Hamilton, whose affable manner is as ingrained as his electric white smile and bronze perma-tan. And while his acting style is better suited to the screen than the stage, his low-key performance allows his co-star to shine all the more.  Is he believable playing gay?  He’s believable playing George Hamilton—his own special creation—and in this version of La Cage, that’s enough.