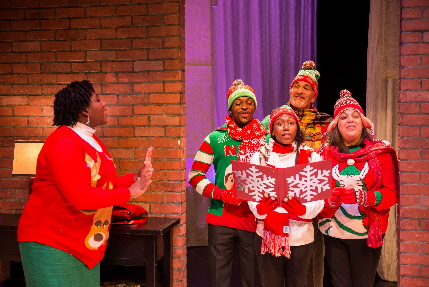 Much like the holiday season itself, there are things to endure and other instances that are jolly. That’s the mixed bag of City Theatre’s Winter Shorts now playing at the Carnival Studio Theater at the Adrienne Arsht Center for the Performing Arts.

All seven of the plays, the companion piece to City Theatre’s ever popular Summer Shorts, are comedies, some are dark comedies.

City Theatre has assembled many of its regular ensemble for the outing. The Winter Shorts company — Irene Adjan, Alex Alvarez, Dave Corey, Diana Garle, Jovon Jacobs , and Daryl Patrice, handle a variety of different roles, and each actor does find something in each of the different characters to set one apart from another.

Change of scenery is seamless, Jodi Dellaventura’s scenic design is festive, while remaining realistic, and the individual direction of each short offers the chance to take in various directing styles.

First up, the Southeastern Premiere of Talking Points by Steven Hayet, and directed by Gladys Ramirez. It’s time for Thanksgiving dinner. There’s Mom (Patrice), Dad (Alvarez), Grandma (Adjan), Grandpa (Corey), Little Sister, Sam, (Garle), and Mike (Jacobs). Mike has news and he’s going to hold a family press conference to deliver it. He and girlfriend, Julie, have broken up. He’s prepared notes, talking points, to explain why one chair at the dinner table will remain empty. He announces he will take questions after the presentation is completed. But, of course, Grandpa interrupts with stories of his own, and Grandma is more concerned about items on her dinner plate than what’s going on with Mike’s love life. This is the hands down winner, and a delightful opener, and it helps that the entire ensemble has a place at the table.

Hapless Disciples by Jessica Farr, and directed by Margaret M. Ledford, is billed as a world premiere. A version of this, albeit with a different title, was included in Thinking Cap Theatre’s Mixed Nuts holiday short play mixer in 2016. It was called Baby Break back then, but the story is the same. Two moms performing in a community Christmas pageant, costumed as angels, take a smoke break outside during the middle of the production. Garle is Sarah and Patrice is Kelly, parents of grade schoolers who are “trying to figure out the Rubik’s Cube of who they are.” This is one of those plays with TMI (too much information) as Sarah confesses that she had her first Big O at the age of five after Kelly divulges she’s discovered her daughter, Maggie, has found a different use for mom’s neck massager. Detailing the Christmas pageant director’s choice of how he’s made the birth of Jesus more realistic by recreating what an actual birth might be like is, well, just TMI.

Mark Harvey Levine’s O, Tannenbaum, relies heavily on Borscht-belt humor, but it gets points for its creativity anyway. Corey plays a talking tree named Tannenbaum who opines about the state of fresh trees being taken from their roots each holiday season. He just wants to get back to his home, yes, return to his roots. He and Liebowitz (Alvarez), the tree’s new owner, have some things in common – they form a bond over their own mixed marriages. It’s the first time Liebowitz has had a live tree – his wife is Christian; Tannenbaum is a Noble fir tree married to a Douglas fir, so he gets it. Ellis Tillman has designed a delightfully decorated costumed tree. Yes, the question is pondered: “If a tree falls in the forest . . . ”

Adjan and Jacobs are two Amazon-esque workers in Fulfillment Center. Alex (Jacobs) takes his packing and shipping job seriously, while Mimi (Adjan) isn’t only disenchanted with consumerism, but questioning life in general. It doesn’t help that she lives in her car, and that she’d rather be mountain climbing. He’s just trying to reach the top of the fulfillment center ladder, clutching a hand-held time clock that charts their every shelf-grab, and shipping coordinate. The two actors and director Ledford find the moments in Jeannette Farr’s soul-searching two hander. Just an aside, this is another play in the series with a reference to personal pleasure devices. “Row 77 is filled with dildos and freaky s—-.”

Steve Yockey had a good premise, most likely, when he started on his long titled Everything That Happened Before that Terrible Holiday Sweater Party, a play commissioned by City Theatre for its Winter Shorts fest. A young, married couple Sally (Patrice) and Matthew (Alvarez) are ready to attend a friend’s holiday party. Matthew looks forward to holiday festivities every year, while Sally is perfectly fine to admit she’s a Scrooge. The carolers (Adjan, Corey, Jacobs, and Garle) that keep showing up at their apartment door aren’t helping matters much.  Yockey’s evolution of the Greek chorus is a highlight as they turn into an angry mob when they are not allowed to perform their requisite carols. But Yockey’s play takes a turn for the ick as Sally discovers her husband’s annual ritual surrounding his love for fruitcake. It’s a sophomoric ending to what could have been a solid comedy.

The dark comedy Mama’s Eggnog has a zinger of a surprise plot twist. Playwright Angela Stern captures the essence of the dynamic of what happens when adult children come back to the homestead, brought together under the same roof by Christmas. Director Andy Quiroga gets it, too, and so do the three actors. This is an unusual plot to swallow, but once you’re able to digest it, you can relax into the absurdity of it all as little sister Sam believes she’s found a unique way to bring her family together. Alvarez, Adjan and Garle are the squabbling siblings who hurl slings and arrows at each other.

The writer of O, Tennebaum, Mark Harvey Levine, has another one of his Jewish juxtaposition plays given a southeastern premiere with A Very Special Hanukkah Special, a spin on the classic It’s A Wonderful Life. Murray (Corey) is tired of Christmas getting all the attention and Hanukkah being the poor stepchild. “No one tries to steal Hanukkah,” he laments. After he visits his friend, toymaker Max, and asks him to bring his Magic Dreidel out of retirement, the world view of Hanukkah changes. Carolers sing “Deck the Halls with Trays of Deli,” but there are consequences. Jacobs is the cheeky narrator à la a PBS special, Adjan is Murray’s wife, Kim, and Alvarez is Max. Patrice and Garle have bit parts. The comedy sketch-esque short is chock full of comedy, but it lacks the wow of a big finish as a closer.

City Theatre are the experts in staging productions of short plays, and there’s no doubt that they know the business. Production wise everything is in place for an absolute whammy of a Winter Shorts. Kudos to the sound design by Matt Corey, and lighting design by Eric Nelson that creates the environment.

Is it difficult to find strong short plays, especially those that are holiday themed? Judging by the plays in this year’s collection, perhaps it shouldn’t be expected that every one be a winner.

Yet, Winter Shorts remains a fun night at the theater, and an escape from the daily humdrum. Plus, this year, producers have added cabaret seating, two rows of tables, where, for a slight upcharge, indulge in your favorite beverage, and reserved seating.  Get ready for added merry.

City Theatre’s Winter Shorts is performed through Dec. 23 inside the Adrienne Arsht Center’s Carnival Studio Theater, 1300 Biscayne Blvd., Miami. Running time is 90 minutes with no intermission. Tickets are $39 to $69 and can be purchased by calling (305) 949-6722, or online at www.arshtcenter.org.

To read a lengthy feature about the history and prominence of
City Theatre, click here.