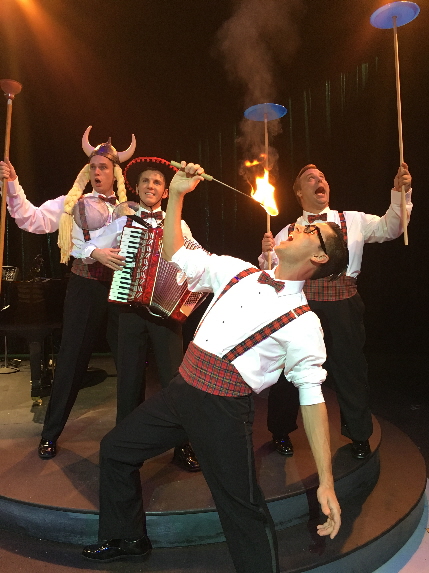 The Plaids, from left, Alex Jorth, Nick Endsley, Charles Logan and Adolpho Blaire, sing their hearts out in Forever Plaid at the Wick Theatre

A sign of summer more reliable than a run on sun tan oil and sweaty trips to Disney World is South Florida theater’s reliance on jukebox revues – inexpensive to produce, undemanding on the psyche and the performance equivalent of comfort food.

The Wick Theatre, which favors this niche regardless of the season, has nearly mastered this genre by hiring solid talent and adding in a few extra production values – all of it evident in this summer’s frothy paean to middle-class America’s music of the 1950s, the venerable Forever Plaid.

It’s backhanded praise, we know, but it’s accurate to say that if you like this sort of thing, the Wick has pulled off as skillful and entertaining a production of this property as you can hope for.

This 1989 off-Broadway hit and regional theater staple is, intentionally, among the silliest and lighthearted with its premise of the titular quartet who died in a car crash in 1964 en route to their big break playing the Airport Hilton cocktail bar, Fusill-Lounge. Inexplicably, they have been resurrected in the present day to play out their career-making concert in the afterlife.

The impossibly clean-cut fresh-faced boys in their white dinner jackets and plaid bow ties intersperse their crooning with clowning around, not terribly polished patter, some good-natured bickering and awkward staging that makes them “just adorable” to the great-grandparents in the audience.

With deer in the headlight looks and cheery Pepsodent smiles, Jinx, Frankie, Sparky and Smudge gamely and earnestly try to recreate their show that they constructed in Smudge’s basement.

The strangest part of Stuart Ross’s original concept is that as puppy dog hapless as these guys are, they sing like angels. Seriously. Their four-part harmonies are smoother than buttermilk. When they are not creating a pure wall of sound, these singers expertly weave in and out of 20-plus classics of the pre-rock 1950s.  They open with “Three Coins in the Fountain” work their way through “Catch a Falling Star” and end with the song they were rehearsing when they were killed by a bus of parochial school kids from Harrisburg, “Love is a Many Splendored Thing.”

It’s strange because the broad comedy and creamy sound seem to come from two different shows as if Ross was afraid of seeming too corny. On occasion, it’s a shame. The boys do a beautiful a cappella version of, believe it or not, “Scotland the Brave,” which they needlessly undercut with some silly business about wearing a tartan sash on the wrong shoulder.

But comedy is a major element. In an homage to the Ed Sullivan Show, the boys play “Lady of Spain” on the accordion while performing three-second snatches of plate spinners, trick shot artists, Jose Jimenez, Groucho, ventriloquists and the like. In another section, they do Four Freshmen-like riffs on songs requested at social events they played from “The Anniversary Waltz” to “Hava Negilah.” Just to show they are “with it,” they deliver a swing-tempo riff with of the Liverpool Lads’ current hit with the lyrics “She loves you, yes, sirree.”

A slight melancholy weaves through the evening as well, a sense that this era has passed on irretrievably. For instance, their fatal crash occurred on the same day the Beatles appeared on the Ed Sullivan Show. If the bus hadn’t killed the Plaids, rock n’ roll would have.

To be honest, it’s never clear in the beginning and least of all in the end what they guys were hoping for: to leave purgatory, to spend eternity performing, to go to heaven, what? But to ask such questions is probably asking too much.

Once again, the Wick has hired well. This marks Steven Flaa’s 15th round directing and choreographing the piece and he has infused it with scores and scores of humorous bits of business. But clearly the heavy lifting fell on the Wick’s Resident Musical director Michael Ursua who so skillfully syncs and blends this quartet, truly a remarkable achievement.

It helps that he has such talented performers, each of which get a chance or two to sing the lead with his cast mates providing backup. Wick mainstay Alex Jorth plays the sort of leader Frankie who gets to explore the bottom of his range in “Chain Gang.”

Adolpho Blaire is the slightly portly ever-earnest Sparky, providing much of the physical humor and playing a duet of “Heart and Soul” on the piano with a volunteer from the audience. Charles Logan is nerd with glasses and an ulcer Smudge. Nick Endsley plays the shy Jinx who lisps, suffers from nosebleeds and grows in stature singing  Johnnie Ray’s, “Cry.”

You may detect a certain weariness in this critic’s tone. The good news is that the quality of these nostalgia-reliant productions keeps getting better and better with the recruitment of even more talented performers, directors and choreographers. For instance, Kevin Black has created yet another satisfying entry at Broward Stage Door with The Soul of Motor City. The bad news is they all have such a similar feel that you get the sense you’ve seen it all before and before and before whether its Irving Berlin or Smokey Robinson.

But Forever Plaid at the Wick remains a chirpy cheering exercise in kitschy innocence that provides an intermission to our 21st Century woes. It seems to say, “Yes, we were silly. But wasn’t it lovely?”