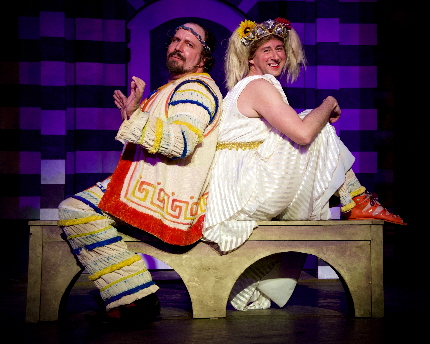 Just when we need it, the circus has come to town. Well, at least the clowns. So send them in.

But appropriate for MNM Theatre Company’s delightfully silly production of A Funny Thing Happened On The Way To The Forum, a musical that prides itself on broad low and often ribald humor, pratfalls, double takes and half the encyclopedia of vaudevillian comedy.

The script for the 1962 show specifically invites directors and troupes to fill out the evening with anything whatsoever that is funny. Director Jonathan Van Dyke and his cast masticating the scenery at the Kravis Center joyfully take up the challenge.

They roll around like mutts in a mud puddle in the brilliantly-crafted script by Burt Shevelove, Larry Gelbart and the second century B.C. Greek playwright Plautus about a Roman slave Pseudolus trying to get his freedom masterminding a Byzantine scheme to obtain a lovely virgin from a courtesan seller for his master’s young son.

Just as impressive, most of the cast have full rich voices – stronger than you expect—to celebrate the first Broadway show in which Stephen Sondheim wrote both the music and lyrics.

It’s certainly benchmark work for Van Dyke who injects triple digits’ worth of sight gags, verbal jokes and some licensed but off-script anachronisms such as Jazzercise, rude patrons who arrive a half-hour late to the 7:30 p.m. curtain  (which actually happened on Wednesday) and wry nods to West Side Story, the Wizard of Oz, Old Yeller, Les Misérables and Fiddler on the Roof. These imaginative inserts start from the very opening minute with a bit we won’t spoil here.

Of course, the linchpin is Johnbarry Green as the raucous rascal Pseudolus. Green has established himself as one of the most versatile musical theater performers in the region with a range that encompasses the sexist husband in Palm Beach Dramaworks’ The Spitfire Grill, the troubled spouse in Measure for Measure’s Next to Normal, the bemused innkeeper in MNM’s Man of La Mancha earlier this season and on this same stage as King Arthur in Spamalot. He does not try to imitate any of his iconic forebears in the role, creating his own madcap grimacing rubber legged ham on rye uninhibitingly cavorting through the evening.

Like Green, Michael Scott Ross makes the most of a mobile, India rubber face as the perpetually hapless tightly-wound Hysterium whose growing angst culminates his solo “Calm.”

Indeed, the entire supporting cast is clearly having a terrific time, from the moment the cast gathers together for a tidal wave of enthusiasm in the last verse and chorus of the opening number.

The formidable Troy Stanley is a wonderfully befuddled and henpecked patriarch Senex, Terry Hardcastle is Lycus the procurer of flesh, J Savage with a supple musical comedy voice as the callow beaming hero Hero, Meg Frost as the dewy and dim object of Hero’s affection Philia, and Paul Thompson as the senile Erronius. Aaron Bower nearly stops the show as the imperious battleaxe Domina blasting out the bravura “Dirty Old Men.” And Sean William Davis’ previous work in the region did not prepare us for his first-rate comic musical performance as the preening macho egotist with a superb baritone, Miles Gloriosus.

And the hardest working people in the show must be the three tumbling Proteans who play a score of roles, often changing costumes and characters in a matter of seconds: Elijah Pearson-Martinez, Stephen Eisenwasser and Frank Francisco.

The considerable rubber band and gam stretching choreography was by Laura Plyer, who was the team captain in Zoetic Stage’s The Wolves last month and Lady Macbeth for New City Players the month before. The cartoony two-story Roman neighborhood was designed by Cindi Taylor.

MNM, which prides itself on only in-state hires, also provides a live six-piece band under the masterful musical director Paul Reekie. The combo does a good job in all but the overture during which some of Sondheim’s difficult passages sound thin in this small group. There were even some sourly missed notes during Wednesday night’s overture.

A few things don’t work as well as they might. Rarely has a regional production we’ve seen ever managed to make the Keystone Kops chase climax land smoothly and this one is no different even though Van Dyke correctly has characters entering a split-second after another has left the stage. Finally, we’ve figured out what’s missing: It desperately needs what Mack Sennett knew it did: a driving underscoring of manic music. Can we persuade Sondheim to take a leave of absence from his current projects with John Weidman and pen some underscoring? How about just playing “Comedy Tonight” if the licensing publisher would allow it?

Second, this cast never flags, especially the indefatigable and bottomlessly talented Green who must need a nap between two-a-day schedules. But neither he nor the production have that God-given shimmer of magic that you simply know that Zero Mostel, Phil Silvers, Nathan Lane, George Abbott or Jerry Zaks must have brought to it. That’s not the fault of Barry, Van Dyke or anyone else. Complain to God, or in this case, the Gods.

Appreciate what they have accomplished. This show is not foolproof. If you have a 99 minutes of your life to waste, and we mean waste, suffer through the 1966 film by Richard Lester (of the Beatles’ films) with Mostel, Phil Silvers, Jack Gilford and Buster Keaton.

Instead, take the family for a guaranteed delightfully funny night out to MNM. Comedy tonight.