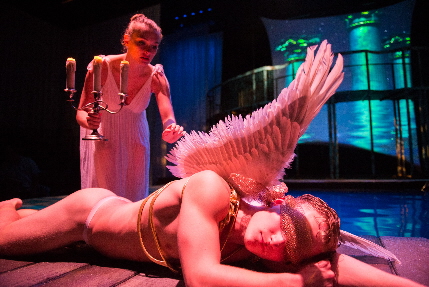 Maggie Weston as Psyche is in love with Taylor Stutz as Eros in Metamorphoses / Photo by Justin Namon.

The University of Miami/Arsht Center production of Metamorphoses is akin to a daring young gymnast attempting a difficult advanced maneuver: admirably brave, visually arresting, but not quite landing as solidly on his feet as you’d hope.

Set in a strange world that smashes together ancient Greece and modern America, this anthology of Ovid’s retelling of myths is staged around a wading pool. One moment it’s a placid river where women are washing laundry, the next a huge watery bed in which a father and his daughter roll about having incestuous relations.

In one startling tableau, a king and his army drown in the tumult of a raging storm at sea, making the audience forget that the ocean is 16 feet wide and two feet deep.

Metamorphoses is far from a stuffy trip into rarefied academic strata. Instead, storytellers gather around a reflecting pool rather than a campfire, ritualistically relating primal tall tales marked by wry humor and affecting pathos. As a psychiatrist character tells us, “Myths are public dreams.”

The nine vignettes recount myths about characters awash in familiar throes of love, greed and hubris that connect to today’s culture. When Phaeton, son of the sun god, wants to take his father’s fiery chariot across the sky, he’s a slacker floating on a sun-shaped air mattress in the pool, demanding that his dad hand over the car keys.

The entire evening is visually and intellectually intriguing, but strangely emotionally distant for the most part. You’re fascinated, but you don’t care about the characters except for a couple of moments.

The project is the third partnership between the Arsht Center for the Performing Arts and the University of Miami’s Department of Theatre Arts. It hooks up experienced professional actors, designers and crew members with students paid to learn alongside the veterans. The quality of the previous outings, Girls vs. Boys and The House of Bernarda Alba, have been mixed. But all three projects would not have been seen locally without the vision and resources of the two groups, especially with one being a commercial entity.

But within that paradigm lie the caveats and quibbles: Despite the unassailable work of professionals like Ethan Henry, several of the students are not yet up to the challenge. The dialogue cobbles together the heightened language of classical poetry and the prosaic ring of street vernacular. At one point, business magnate King Midas assures a man who may have found the lucrative secret to eternal life, “Don’t worry. I’ll see you get a cut.” Ricocheting between those two modes of speech, let alone melding them into a coherent whole, is difficult for veteran actors let alone those still studying their craft. The young actors often try to compensate by overacting with overblown proclamations of their lines.

The initial concept came from Chicago director Mary Zimmerman who adapted Ovid’s myths (and other sources) in 1996 for a run at Northwestern University that was expanded when it was moved to the Lookingglass Theatre Company. She mounted a rapturously received off-Broadway run in 2001 and on Broadway the following year. All of them featured the use of a pool plus Zimmerman’s legendary expressionistic staging.

This edition is directed by Henry Fonte, producing artistic director of the Jerry Herman Ring Theatre at UM. He never saw Zimmerman’s production and he courageously avoided every YouTube video and every word about what Zimmerman had done. While he gave his cast the script, which has minimal stage directions, he ignored most of Zimmerman’s notations other than the pool.

The result is a unique interpretation of the work, but one unquestionably just as valid. I did not see Zimmerman’s version live but I did watch it on video at the Lincoln Center library, which robbed it of much of its reported vitality. Fonte’s take seems far more accessible and humanistic. His imagistic pictures and imaginative ways of using the pool belong to him alone. So, for good or ill, people who have seen this before have not seen this before.

Above all, his strength is in his visual sense. A spidery anthropomorphic Hunger attaches herself like an unshakeable leech to the body of willful king Erysichthon. And there is the lovers’ parting that must occur when Orpheus violates his pledge and looks back at his beloved Eurydice. Over and over, Orpheus re-enacts that last moment in different configurations as he simultaneously regrets and cherishes their final shared instant. It is one of the few heart-breaking scenes in this production.

Fonte’s vision has galvanized his production team. Set designer K. April Soroko and projection/lighting designer Eric Haugen have created an infinitely malleable setting that can by a sylvan glade, a gold-lined mansion or Hades itself. Matt Corey has created yet another stunning soundscape that morphs with every scene and relies heavily on music to create varying tones. Ellis Tillman has provided a vast array of diaphanous togas and gowns.

Several words of advice: First, if you sit in the front row, accept the usher’s offer of a towel before the show starts. It may get a little wet around your feet. Second, a poster in the lobby advises that there is no intermission and the splashing of water may aggravate a need to go to the restroom, so visit ahead of curtain time. Finally, for the best view of Fonte’s staging, sit in the back row of the center section. It’s also drier territory.

To see a slide show of photos from the production, click here.