Victor/Victoria Is Two Times The Fun With Emphasis On Antics 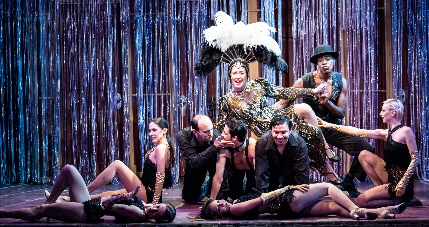 There’s more than a bit of Noel Coward running through Broward Stage Door Theatre’s Victor/Victoria. It’s what makes this production tick, a true understanding, and might we say, appreciation of the slapstick foundation of the 1995 Broadway musical version of Blake Edward’s 1982 movie.

Victor/Victoria was never meant to be one of those Broadway musicals – the haves that have a perfect book, great score, yada, yada. There was remarkable success with Julie Andrews as the masquerading Polish count in the movie, and it was a star vehicle for her both for the film and Broadway. So, what to do when you choose to do this show? Up the antics.

It’s classic farce. Characters run, run, run up a two-story set created to stand in for a Paris luxury hotel. A chambermaid sneaks nips of champagne, then goes down, down, down the stairs one by one on her keister. Doors slam. A peeping Tom perches a ladder outside a window, then lightning strikes, and boom. Action happens from entrances in the rear of the theater, surprising the audiences as characters appear in the aisles, or exiting from the stage, cackling their lines as they rush out the back.

Director Kevin Black imbues every inch of the production with an over-the-top nonsense-ibility. And Stage Door’s fan base eats it up.

There’s nary a person who isn’t familiar with this gender bending tale about a down-on-her-luck singer in 1930s Paris, who meets flamboyant emcee Caroll “Toddy” Todd (Larry Buzzeo, a fixture around town at Stage Door, Willow Theatre, Island City Stage). With Toddy as her manager, Victoria Grant (Dalia Aleman, last seen in Stage Door’s Nice Work If You Can Get It) becomes a Polish count named Grazinski and female impersonator to boot. She’s a woman playing a man playing a woman.

Added to the mix is a Chicago mobster named King Marchan (James A. Skiba), a dizzy dame on his arm, Norma (Ashley Rubin), and Squash, his bodyguard (Troy Stanley), a big bear of a guy who has his own secret to reveal, and Paris can make him do it. Will people believe Vicki is a Vick? And what happens when the alpha-male gangster finds himself falling for Victor, um, Victoria?

Black has assembled a cast that’s willing to make ’em laugh, but only so far as should be maintained. Thank goodness we don’t get a retread of the movie – no one seems to have watched it again on Netflix before learning their parts. This musical also calls for some touching moments, too, and, thankfully, are treated with regard. The music for the screen was written for Victor/Victoria by legendary Henry Mancini, who died before the Broadway show opened. Leslie Bricusse wrote the lyrics. Frank Wildhorn (Chess, Jekyll and Hyde) stepped in for Mancini, and there are a few songs that, if you know Wildhorn’s work, have that melodious stamp emblazoned on them.

The character of Vic times 2 is forever linked with Andrews, and Aleman channels that a bit. It’s the right choice on so many levels, giving audiences a familiarity they expect from the character. Aleman’s a strong soprano, so when singing the show’s Victor numbers, her vocals are subdued. Plus, they are written in contralto, which has always been a challenge for the soprano players. Where she shines is on the songs that utilize her range: Act 1’s lament Crazy World. On Wildhorn and Bricusse’s absolutely beautiful Living in the Shadows, towards the end of Act Two, there’s no mistaking her talents.

Buzzeo has a gay old time as Toddy, cracking jokes full of double entendres as if he’s made them up on the spot. His delightful soft shoe with Aleman is reminiscent of Astaire and Kelly, and those old timey buddy dances of movies of yesteryear.

Skiba could have been an actor in an Edwards movie; he has a debonair, film-star flair about him. In one of the show’s highlights, Skiba delivers the “talk” song, an inner wrestling match about the macho man’s conflicted feelings for the Count in Act Two’s King’s Dilemma. The chemistry between his new love, when he discovers he is really a she, could have a bit more spark.

On the supporting side: Elissa Solomon is busy stoking up the comedy as an extremely hunchbacked Madame Roget and the drunken maid. Kevin Reilley as Sal Andretti, Marchan’s business partner “who don’t want to do no business with homosexuals,” slathers on the mobster accent, along with The Boss mentality. Michael Schneider as French cabaret owner Henri Labisse is the fall guy for this hoax, literally, and Michael Cartwright as top Paris talent agent Andre Cassell is Ziegfield-esque.

On the production side: Danny Durr’s choreography keeps things simple enough so that dancers don’t appear to be straining, yet there are plenty of high kicks to allow for an illusion of intricacy. Jerry Sturdefant’s costume design portrays the roaring time period, and there are some dynamite head pieces for maximum effect for Victor’s stage numbers.

The musical is sung to a pre-recorded track of orchestrations by David Cohen with musical direction by David Nagy. The track fares well as an accompaniment to the singers, but seems less than lush when left to stand on its own in the entr’acte. Granted, it would be difficult to do a musical of Victor/Victoria stature with live music unless there were enough funds for a full orchestra.

Victor/Victoria runs through June 10 at Stage Door Theatre, 8036 W. Sample Road, in Margate. Showtimes are 8 p.m. Friday-Saturday, 2 p.m. Wednesday and Saturday-Sunday. Running time is 2 hours and 30 minutes with a 15 minute intermission. Tickets are $48. To order, call 954-344-7765 or go to StageDoorFl.org. Buy one, get one free sale for any performance lasts until May 27 ordering through box office.