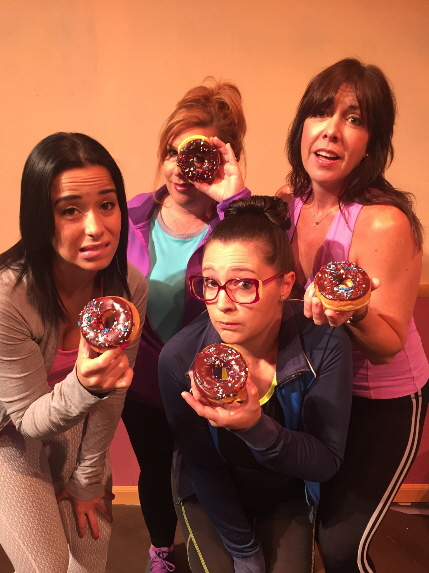 Shenise Nunez, Angela Thomas, Stephanie Genovese and Katie Angell Thomas lust after a doughnut in a revival of WaistWatchers: The Musical / Photo by Dan Kelley

Like Hamlet, Madama Butterfly and the Terminator franchise, the indestructible entertainment phenomenon that is WaistWatchers: The Musical has returned to South Florida in a new production at Broward Stage Door that word-of-mouth likely once again will make a success through the summer.

This homegrown entry in the lighthearted-women’s-musical-using-parodies-of-Baby-Boomer-songs sweepstakes has been a popular Menopause-style hit in this region since it debuted at the Maltz Jupiter Theatre in 2007 under the title Food Fight.

When author Alan Jacobson opened his own venue, The Plaza Theatre in Manalapan, it ran for five months in 2013 and closed only because the theater had a subscription season planned. Jacobson has been exploring various deals to license the show and/or tour it.

For the uninitiated, WaistWatchers is a series of workout sessions at a women’s gym where four winning middle-aged women bond in sisterhood as they wage a battle of the bulge. There is dialogue and even backstories, but mostly the show invests two dozen iconic pop songs and show tunes with original lyrics that cover everything from plastic surgery to yearning for a sugar binge to the joys of an all-you-can-eat buffet.

Jacobson’s lyrics, which atypically for this genre do scan precisely with the originals, can be sort of predictable. Sondheim this isn’t. But they frequently are awful darn witty and speak what so many in the audience recognize from their own experience.

The bespectacled Cheryl (Stephanie Genovese) bemoans how her husband will not leave her alone sexually these days in a lament sung to the tune of “Maria” from West Side Story. The new song title? “Viagra.”

Recently abandoned Cindy (Senise Nunez) leads the group in an ode to having work done sung to the tune of “New York, New York.” The refrain? “New Work, New Work.” That slides with no segue into “Botox Queen,” a riff on the ABBA hit.

The script is a bit of vaudeville/sitcom such as when Connie says she’s scared of surgical knives, she adds, “Why can’t I feel that way about forks and spoons?” That gives you a good sense of the tone.

The banter seems a little discomfiting in this age when society is striving to escape an obsession with body image. But the gym conversation likely reflects more of a persistent reality than we want to admit in 2015 as the women acknowledge that their exercise is an effort to compete with women in their “20s who can burn off carbs just by breathing.”

Part of what makes this edition land so solidly, even when the material veers close to lame, is the vivacity and brass band voices of all four actresses led by director Dan Kelley.

Angela Thomas, in particular, has a clarion belt worthy of Merman, evidenced in her 11 o’clock number, “I’m Fat and I’m Okay” which is set to a blistering arrangement of “Don’t Rain On My Parade.”

But everyone has a shot in the spotlight such as when Genovese leads a roof-raising run at the folk song, “If I Had A Bagel.”

Great dramatic theater this isn’t nor is it even brilliant comedy, but it is exactly what it wants to be: a thoroughly entertaining, undemanding afternoon out that has the audience clapping along and steadily chuckling.