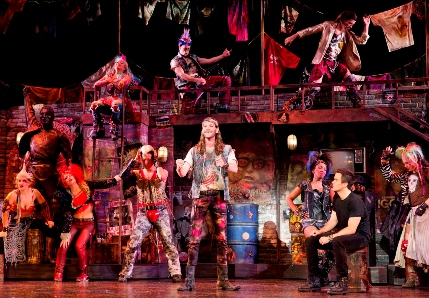 Rock theatrical productions are an amalgamate: They’re a rock concert with a story that’s hung on songs that weren’t intended to become a linear tale. Such is the case with We Will Rock You, another one of those jukebox musical mixtapes a la Jersey Boys/Rock of Ages/Mamma Mia . This time the supposed foundation are the lyrics and music of megaband Queen, who amassed a following in the mid 1970s and 1980s for music and records (yes, we had records then) that could be consumed as mini-rock operas. But We Will Rock You, now playing at the Adrienne Arsht Center, doesn’t quite follow Queen’s intended path.

British comedian and writer Ben Elton (he’s known in England as one of the most popular stand up comedians and as a writer for TV’s Mr. Bean) wrote the script that takes place in a Boy George meets Mad Max futuristic world where music has become C.R.A.P. (Computer Recorded Anodyne Pop). It’s steeped in clichés and takes place in a we’ve-seen-this-before future world where everyone has all but lost their soul, except a few Bohemian rebels who believe, in this case, that the discovery of real music will conquer all. The touring cast at the Arsht Center (most of them anyway) really sell the story, though, and it’s hard not to love the soaring familiar rock anthems of Queen

The script is influenced by more than the Brit band’s music with shades of Rocky Horror Picture Show and Footloose morphed together to create a surreal dream. Furthermore, it doesn’t seem that far-fetched as the planet that was once Earth is now iPlanet and is controlled by a giant corporation named GlobalSoft. GS makes money on the aforementioned C.R.A.P. All musical instruments have disappeared since music can only be generated by the corporation and its computers. (Can you say Apple?)

Of course, an Evil Queen (part Cruella de Vil, part Dr. Frank N. Furter) makes sure individuality remains squashed – Everyone on iPlanet is a carbon copy of one another, the ever present Orwellian clone. However, she’s become threatened as of late by a group of rebel Bohemians who are on an archaeological dig to find the holy grail — an “ax” (a.k.a. guitar) that’s hidden somewhere in a stone and can help them find the true meaning of their lives through the now-extinct rock ‘n’ roll.

We Will Rock You has been a megahit in London’s West End, where it has had an ongoing run for 12 years. Elton updated the original script for this new North American tour (newer, U.S. friendly references were put in including tips to popular American artists such as Britney Spears, Miley Cyrus, Eminem and Katy Perry), plus he’s ratcheted up some modern references (twerking) and technology (tweeting).
Of course, romance blossoms, too, in a boy meets girl story that serves as a subplot to the “whatever happened to good ol’ rock ‘n’ roll” tall tale.

Brian Justin Crum plays Galileo Figaro, a dreamer who hears obscure song lyrics in his head.  “I have dreams you see. And I hear noises, screeching, thudding, banging noises. And words, words drop into my head, too many words. Help! I need somebody. Help! Not just anybody.” He recites Abba lyrics and David Bowie’s, too, among others. Crum’s got the voice and the stage presence to carry the show, with a mix of American Idol swagger and Newsies Broadway style. He’s paired with Ruby Lewis as his love interest, who Galileo nicknames Scaramouche (an insider Queen joke from the song Bohemian Rhapsody). There’s much suspension of disbelief that’s called upon here in the casting of Lewis. She looks too mature to be a high schooler, and doubtfully would not get a request to show her I.D. at a local pub.  It’s especially apparent opposite the much younger looking Crum. The two are lacking in love chemistry, too, so sparks unfortunately don’t fly when the two start to fall for each other. To Lewis’ credit, however, she’s a great singer and the pair soars in I Want To Break Free.

Ryan Knowles as Buddy is the hottest property in this tour — a real showstopper. He’s channeling Shaggy from Scooby Doo, the burned out stoner – there’s always one of them in your high school crowd. Knowles has a vocal range that can go from the deepest baritone to the sweetest tenor. Late in Act II, he gets a chance to show his range on the wonderful ballad These Are The Days Of Our Lives.

For what should have been the blow-the-roof-off the Arsht Center role, the Killer Queen opening night lacked the required sting. Understudy Jessica Crouch filled in as the Queen. The part is gifted with the best songs of the night, Another One Bites the Dust, Fat Bottomed Girls and, of course, Killer Queen. But Crouch doesn’t have the required presence nor the voice to make the Queen reign over these killer numbers. Frankly, someone should change the casting of this entirely. How about someone in full on drag sing Killer Queen? Now that’d bring down the house!

And for a musical about rock music, the fantastic searing seven-piece band and musical director that backs the show is hardly seen. They are covered by a curtain throughout most of the show. Only in a few songs is the audience privy to watching them work. Late in Act II, we’re given the pleasure of having them ever present as they wail and riff in Hammer to the Fall. It’s one of the highlights. The band deserves applause and mention: The We Will Rock You band includes Rick Hip-Flores (musical director/conductor), Brandon Ethridge, Emily Marshall, Tristan Avakian, Bob Wegner, Mike Cohen, David Stevens and Danny Young.

What the show and the music do bring to light is the talent of the late Freddie Mercury, the driving force behind Queen. Mercury died from complications of AIDS in 1991. We Will Rock You isn’t really a tribute to Queen, however, it is a testament to the genius of Mercury, guitarist Brian May and drummer Roger Taylor.

Interesting sidenote: One of the big money backers of the show – the London run and the national tour is Robert De Niro. Yes, that Robert De Niro. May and drummer Taylor, ran into De Niro at the Venice Film Festival in 1996. De Niro’s adopted daughter, Drena, who has been a DJ in London, is a fan of the band. The trio got to talking and De Niro decided, with his producing partner, Jane Rosenthal, to branch their movie production house, Tribeca Productions, into the theatrical realm with the Queen musical. De Niro has done a lot of press for the show – he appeared on the late night Jimmy Fallon show; Fallon is a Queen fanatic — and De Niro has been making the rounds trumpeting the new domestic tour. No doubt it’s to generate excitement since there is a buzz that the producers are hoping to get We Will Rock You a Broadway run after the national tour, perhaps next year.

By the way, there are warnings posted and announcements that this show is loud. Ushers have earplugs to hand out for free to the fearful, but for those of us who played in rock bands in the earlier decades of our lives, we know that rock ‘n’ roll isn’t meant for the meek! However, the multiple warnings were a bit like the cautionary placards for roller coaster rides at Disney World – more bark than bite. The decibel of the show won’t make your ears bleed, but seek out earplugs if you must.

This entry was posted in Performances, Reviews and tagged Broadway In Miami. Bookmark the permalink.