Posted on December 3, 2022 by Bill Hirschman 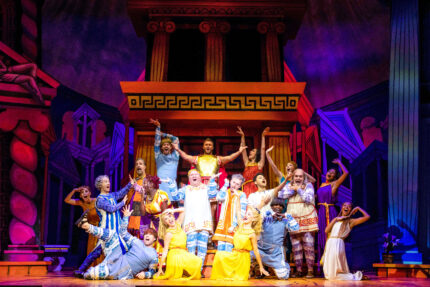 The circus has come to town with A Funny Thing Happened on the Way to the Forum, albeit a Roman circus, but populated by a chariot-load of clowns cavorting across the Maltz Jupiter Theatre.

In this time of upheaval and uncertainty, sometimes what you need is a dose of supreme silliness, not just silliness but the classically constructed silliness created by a cadre of comedy experts.

AFTHOTWTTF is, indeed, very much a 1962 time capsule of comedy celebrating vaudevillian humor as if it was an extended skit from Sid Caesar’s Your Show of Shows. Even the title, some may remember, is a riff on the ancient intro to countless stand-up comedy routines: “A funny thing happened on the way to the….” (fill in the blank — the office, the theater, the marriage counselor).

But if you can resist grinning and chortling much of the time then you ought to audition down the road in a community theater production of How the Grinch Stole Christmas.

The production molded by director Jennifer Werner, choreographer Ariel Reid and music director Caryl Fantel is an encyclopedia of puns and pratfalls, grins and grimaces, sexual double entendres, proud of having not a shred of subtlety, precise verbal timing and extensive physical comedy – especially the latter. Hardly a line goes by that isn’t augmented with twisting body language.

In the published script, writers Larry Gelbart (M*A*S*H) and Burt Shevelove (The Frogs) encourage the creative minds in each production to let their individual talents run amok, encouraging “the double take, the mad walk, the smirks, the stammerings.” The script is meant as a scenario not a straight jacket. Werner and Reid have taken Burt and Larry at their word. At one point, someone distracts another by yelling “squirrel” like a schoolyard kid – and it works.

So did the late Stephen Sondheim in his first full score of both music and lyrics that made it to Broadway, such as the classic vaudevillian number “Everybody Ought to Have a Maid” with a quartet of leering non-PC men strutting in a single line across the apron. The maestro’s humor and skill invested reward audiences willing to listen carefully to the light-hearted but carefully wrought numbers.

The only failing – and this has been true of nearly every production this critic has seen – is the penultimate chase scene in which everyone is pursuing everyone. It’s supposed to resemble a Keystone Kops scene but rarely has the not-a-moment-to-breathe pacing that is  required.

And yes, some of the songs – no matter how brilliant – do feel like required musical comedy tropes. You want them to advance the plot even a little but they are just another way of presenting the humor.

Of course, crucial to any Forum’s success is our narrator, Pseudolus the slave. Any experienced lover of theater has seen this before, with everyone starring from Zero Mostel to Phil Silvers (who originally was supposed to star) to Milton Berle to Nathan Lane to Whoopi Goldberg to Avi Hoffman and many, many others. It’s a part that can be adapted or absorbed into each individual’s well-known persona. 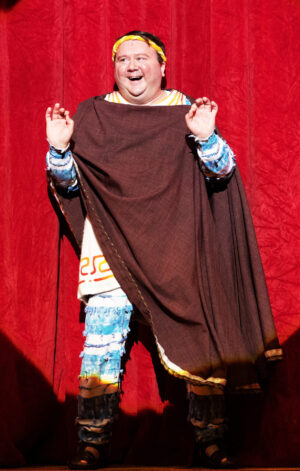 This round is blessed by the frolicking of Scott Cote, a veteran of national tours and regional productions (but who says in the playbill that he has never appeared on Law & Order). With apple cheeks, piercing eyes, feet always kicking out, arms and fingers outstretched, head tossed back, Cote is the tireless engine propelling the play as it barrels along (most of the time, until someone sings a wry ballad).

The large cast includes glorious baritone Sean William Davis as the preening general Miles Gloriosus, Steven Huynh as the delightfully naïve hero Hero, golden-voiced Mackenzie Meadows as the even more naïve and not too bright heroine Philia, Wayne LeGette lost under makeup and costume as the father seeking his lost children, Paul Louis as Lycus the entrepreneurial procurer who displays his wares as if he were a New Jersey car salesman, Andrew Sellon as the lusting Senex, Roberta Burke as a battleax wife, and Jeremy Morse as the well-named slave Hysterium. All have melodic voices but channel them through comic vibe of their songs.

Arguably the hardest working ensemble in the region at the moment includes Lycus’ lithe ladies: Laura Sky Herman, Melanie Farber, Ashley McManus, Cat Pagano, Kellyanna Polk and Minami Yusui, plus a mostly voiceless trio of protean Proteans Cameron Benda, Deon Ridley and Alex Jorth who rarely get more than a few minutes rest. Inexplicably, all of them have pronounced five o’clock shadows, as does Hysterium – the men not the ladies.

The company’s Producing Artistic Director/CEO Andrew Kato underwent extensive diversity sessions during the pandemic and its results are clear here: This may be the most consciously color-blind casting and diverse troupe you’ve seen in a local large-scale musical.

Also as usual, the visual and aural elements are enviable. Start with Adam Koch’s Roman street seemingly drawn from a Mr. Peabody and Sherman cartoon including a vaudevillian runway at the apron. Add in Scott Stauffer’s faultless sound, and the cornucopia of bright togas and gowns that Leslye Menshouse
adapted from Costume World Theatrical.

Yes, these are tough times for many people. But troubles evaporate when this company and the band dive into the rousing opening number and begin chewing the scenery and everything else in sight. As the lyric says, “Tragedy tomorrow, comedy tonight.” 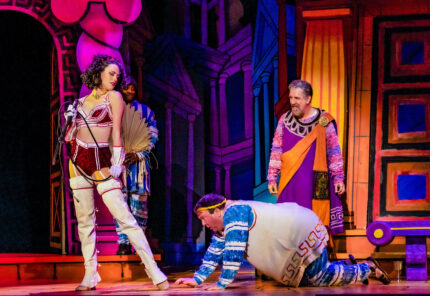